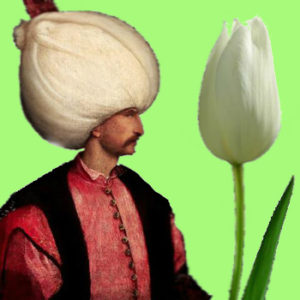 The quintessential Dutch flower is of course the Tulip. But few people realize that the origin of the word is actually derived from an Islamic word for “turban”—an ill omen indeed!

This is sadly appropriate now because Amsterdam, the main city of the Netherlands, is fast becoming a Muslim city (15 to 20%). It was also the centre of the electoral breakthrough by Denk, the new Turkish political party in Holland, which gained 2% of the national vote and three MPs in the 150-seat parliament.

In fact, one of the most shocking statistics from the election is that in Amsterdam itself, Denk actually did better than Geert Wilders’ Freedom Party, which finished second nationally. In the main Dutch Metropolis, Denk got 7.5% of the vote, against only 7% for the Freedom Party. 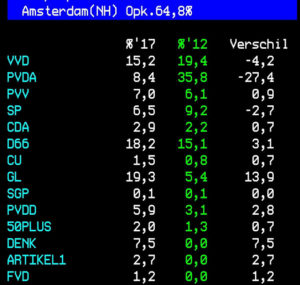 Denk also got close to the vote of the Labour Party, which collapsed nationally but also slumped from 35.8% in the city to 8.4%.

This is interesting because one reason the Labour Party’s vote collapsed is because it not only lost Dutch voters but also non-Dutch voters, and especially Turkish voters. In particular, it is clear that almost all of Denk’s voters would previously have voted Labour, as the Party’s founders got their start on Labour’s ethnic fast-track.

While most attention has been on Geert Wilders and some on Denk, the big  story in this election is the collapse of the Labour Party. This is of special interest for us on the Alt-Right because the party’s fortunes are a good example of the problems of the “progressive stack” coming home to roost, with “imported” ethnic voters feeling ill-at-ease with elements of Cultural Marxism, such as feminism, gay rights, and disproportionate Jewish influence.

These problems, which exist in all Leftist parties attempting this awkward balancing act, are often multiplied when the “imported” voters are Muslim, as they are in this case.

Turks reportedly make up 2.6% of the Dutch population. The fact that Denk got 2% of the national vote suggests that most of them decided to act as a bloc and abandon the Labour Party for Denk. This shows an admirable degree of ethnic unity that White people would do well to emulate.

But what exactly is behind the decision of Turkish voters to turn their backs on Labour? After all, most ethnic minorities find great benefit in furthering their collective interests through a party of “useful idiots” keen to morally signal by fast-tracking them and promoting their interests; especially if that party is a regular occupant of government as the Dutch Labour Party has been through various coalition arrangements.

In most countries, small ethnic groups adopting a strategy of creating their own party would likely result not only in their political marginalization but actually their electoral annihilation. For example, a party centred on Pakistanis or West Indians in the UK would end up getting practically zero representation. But because Holland has a pure proportional representation system, the electoral costs to small groups going it alone are practically nil. This is why you have dog lover and pensioner parties. Added to this is the fact that Dutch politics is based on coalitions, in which small parties can sometimes exert enormous bargaining power. Under the right circumstances, the tail can wag the dog.

These are the pull factors, but the creation of Denk was also spurred by push factors emanating from the tensions within the Labour Party. In this respect, it is perhaps significant that since 2010, two of the three elected leaders of the Labour Party, including the present leader, have been openly declared Jews, who stepped up to the leadership of the party from being mayors of the fast-Islamicizing city of Amsterdam.

Working in Amsterdam city politics is ideal preparation for any leader of the Labour Party because the city’s diversity and culture clashes echo those of the “progressive stack.” However, the collapse of the Labour Party points to something going very wrong with this balancing act.

By all accounts, Job Cohen was skilled at his job. For example, when the filmmaker Theo van Gogh was murdered in Amsterdam by a Muslim extremist in November 2004, Cohen worked hard to calm tensions, mainly by cucking to the city’s Muslims, who were apparently crying out in pain as one of their own did a lot more than just strike the Dutch filmmaker.

“Islam is here to stay, in this country, in this city,” he said at the time. “We have to deal with Islam as a fact, not whether we like it. So the real question is how to get on with each other.”

This approach saw him lionized by the Western mainstream media. TIME magazine even drummed up a special award for Cohen— “European Hero.”

But reaching out to Muslims in this way was only one side of the equation. The rise of a populist, cultural nationalist option in the form of Geert Wilders’ Freedom Party, started to put pressure on the Labour Party and other parties to demonstrate the even-handedness of the multicultural experiment. In effect, this meant demonstrating that the sacrifices were not only on the Dutch side.

After the 2012 elections, Labour joined the coalition government, with Lodewijk Asscher becoming Deputy PM and Minister of Social Affairs and Employment. In this role Asscher focused on Muslim assimilation and integration—or the lack of it. He soon realized that there were powerful ethnic interest groups working against this, in particular the Turkish religious group Millî Görüş, which has its roots in Turkey as a response to the secularization and Westernization of the Kemalists. Because of this history, the organization strongly rejects Dutch culture and values.

In 2014, ISIS was grabbing the headlines. Initially supported by Turkey and the Gulf States, it was making rapid progress. In June it declared a Caliphate and threatened Baghdad, prompting Western intervention in the Middle East.

These events led to growing tensions in those Western countries with large Muslim populations. In September 2014, Asscher announced “heightened scrutiny” of Millî Görüş and three other Dutch Turkish organisations.

This move by a Jewish minister of their own party put ethnic Turk MPs in the Labour Party in a slightly awkward position. However, their response was probably not anticipated. The party’s two Turkish members of parliament, Tunahan Kuzu and Selçuk Öztürk, left the party and founded a new implicitly Turkish party, finally calling it Denk. The name is interesting as it means “think” in Dutch but “equality” in Turkish.

Denk’s true policies are unclear but can be inferred as those of pragmatic ethnic interest. Their rhetoric and slogans still have a left-wing hue, calling for “tolerance” and “justice,” etc. — obviously a good strategy for any minority. In addition to this, they also favour establishing an Orwellian-sounding “racism register,” in which acts, deeds, or words defined as “racist” can be dutifully recorded for future use. They also want to effectively ban the term “integration,” replacing it instead with the less conditional word “acceptance.”

The most revealing fact about the founders of Denk, however, is that two supposedly left-wing MPs left the Labour party after its minister called not for the suppression or banning of a Turkish religious group, but merely for “heightened scrutiny.”

Here we see demonstrated to perfection the pure group interest of the ethnic politician in Western countries—ruthlessly following the interest of his tribe completely untroubled by mere political or ideological principles. Would that the White natives did the same.