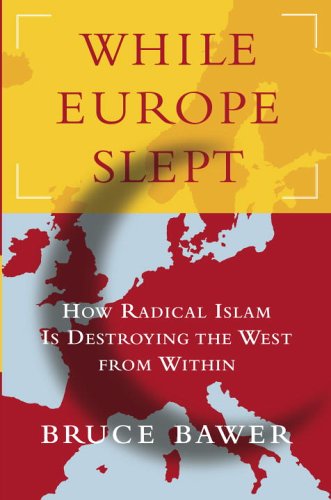 These same fears were clearly articulated over a decade ago by Bruce Bawer in his prescient book
. Bawer argued then that Europe’s democratic traditions and open society face a growing demographic and cultural threat from Europe’s Muslim immigrant communities who reject Enlightenment values and resist integration.

He blamed this trend primarily on the “self-destructive passivity” among Europeans, whom he regards as “appeasing” essentially incompatible philosophies like radical Islam in the name of religious tolerance.  Unlike the former American ideal of “melting pot” integration of immigrants within the wider society, Europe generally fails to integrate Muslim immigrants and instead tends to marginalize and isolate immigrant communities in the name of multiculturalism.

According to Bawer, Western European governments subscribe to the worst kind of political correctness. From Sweden to France, governments shower immigrants with benefits, install them in ghettos, while turning a blind eye to Muslim attacks on women, Jews and gays.

Writing in 2006, Bawer hinted at a coming cataclysm. “Immigrants to Europe bring with them many tribal customs that are flagrantly inconsistent with a Western understanding of human rights,” he writes. “These customs represent flashpoints of latent or potential conflict between the Muslim immigrant communities and their host societies.” And in a multicultural society, we are expected to simply tolerate them even though they conflict with the most basic values of historical Western societies.

Response to the book was predictably ideological. Bawer characterized the leftwing criticism as symptomatic of one of the very problems he had sought to address in the book:

One of the most disgraceful developments of our time is that many Western authors and intellectuals who pride themselves on being liberals have effectively aligned themselves with an outrageously illiberal movement that rejects equal rights for women, that believes gays and Jews should be executed, that supports the coldblooded murder of one’s own children in the name of honor, etc., etc.

Remember all of the recent furor and Swedish denials caused by Trump’s listing of Sweden as one the Europe’s countries negatively impacted by the influx of refugees? It seems that almost daily since then there are reports of riots and conflict in most of the urban areas where refugees have been settled.

The danger is so great to police in the notorious Swedish No-Go Zone of Rinkeby that they will not be allowed to use public transportation to get to work and may have to be driven to the station daily for their personal safety. Rinkeby was the site of a riot which saw looting and car burnings less than 48 hours after Trump mentioned the impact of mass migration on Sweden.

The heavily migrant-populated Stockholm suburb of Rinkeby is just what Bawer predicted 10 years ago. It is a textbook example of a No-Go Zone where police and even the liberal media are constantly under threat of attack from residents. To deal with the danger, the police have planned a new fortified police station, at the cost of 380 million Swedish Krona (£35 million). It will look like and be designed as a fortress with bullet proof windows, steel reinforced walls, and surrounded by security fence. Security is the police’s main concern in the area following attacks against them by residents while out on patrol. Police in Rinkeby now rarely venture on foot into the area without backup.

Christoffer Ersenius, local union president of the police district of Rinkeby, said many officers who police the area are still afraid for their safety.  There are also safety concerns for those contracted to build the new police station.  Earlier this month, it was revealed that the police had put the project on hold as contractors were reluctant to take on the work for fear of their workers’ safety.

But remember, despite all this, diversity is our greatest strength.

It is not possible in such a brief essay to describe the deplorable conditions in all the European cities where similar problems are evident, but what I will do is provide an overview of the extent of the problem in more general terms.

In recent decades, the Muslim share of the population throughout Europe grew about 1 percentage point a decade, from 4% in 1990 to 6% in 2010. 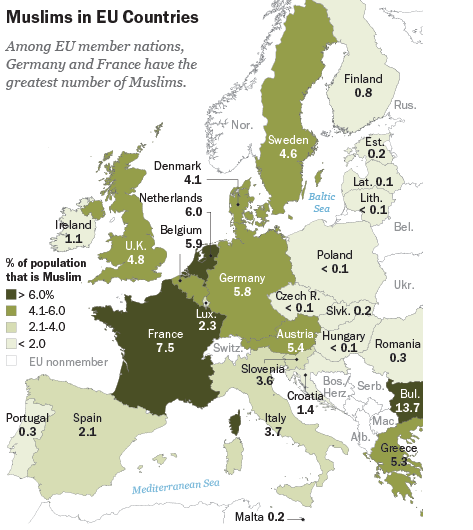 Using the 2010 map we can see a stark divide between Western and Eastern Europe. Western European members like the UK, France, Belgium, Denmark, the Netherlands, Germany, Austria and Sweden all now have very significant Muslim populations ranging from 4–8% of the total population. In Southern Europe the percentages can be even higher in Bulgaria (13.7%) and Greece (5.3%). However, in the Eastern EU countries, the percentages are negligible, far less than 1% in the Czech Republic, Estonia, Finland, Hungary, Latvia, Lithuania, Poland, Romania and Slovakia. This is why the EU, dominated by Western Europe, wants to impose quotas on the Eastern EU countries.

The map however does not begin to tell the whole story.

This is because Muslims concentrate within major cities. Many EU cities including Amsterdam, Brussels, Birmingham, Manchester, Cologne, Marseille, Stockholm, etc. have swelled to a 15–20% Muslim population (again 2010 figures).   However many areas within a city are majority to nearly all Muslim. (Similarly, In the US the NYTimes estimates the Muslim population in New York City from 600,000 to one million). So we go from 4–8% in the nation, to 15–20% in the city, to 50–100% in a given neighborhood. This is why police need military strongholds from which to conduct sorties in the no-go-zones that are proliferating throughout Western Europe. Because of the concentration of its population in cities, Muslims can now elect one of their own as mayor of London, and other European cities.

But will Western Europe ever awaken from its comfortable dream state of denial? The next evidence, for or against, will come from France, which has one of Europe’s largest Muslim populations.

Marine Le Pen, the presidential candidate for France’s populist National Front (FN), is now leading the fight. She is calling for the German-dominated euro to be scrapped and France’s membership of the EU to be put to a referendum unless the open-borders Schengen Agreement is abandoned and the EU reconfigured as a much looser association of sovereign nation-states.

“People are waking up,” confirmed FN deputy leader Florian Philippot immediately before one Le Pen’s recent speeches. “They see Brexit, they see Trump and they’re saying to themselves: ‘It’s worth going to vote.’”

This idea of an impending sea-change in world politics is one of Le Pen’s key talking points:

The people are waking — the tide of history has turned. What is at stake in this election is the continuity of France as a free nation, our existence as a people. … The French have been dispossessed of their patriotism. They are suffering in silence from not being allowed to love their country. … The divide is no longer between the Left and the Right, but between the patriots and the globalists.