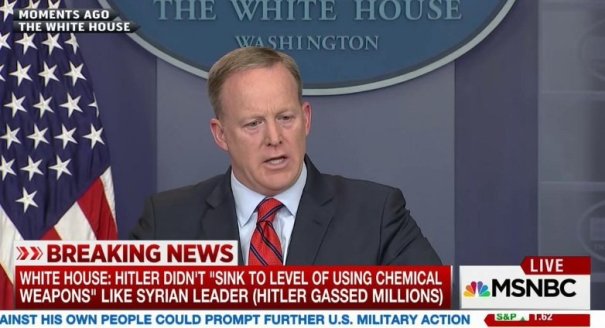 First of all, one can hardly call Sean Spicer the most effective White House Press Secretary: he lacks the one quality a spokesman for the President needs; namely, he is not articulate.  He bumbles and stumbles over his words to an extent I have not witnessed by previous press secretaries, who have been nothing if not slick and slippery in their repartee with journalists.  To give a concrete example, Spicer pronounces “nuclear” as “nucuIar” á la George W. Bush.  I sense that he is fluent in certain matters, such as the economy perhaps; but otherwise, he is an ill-fated choice for the job, a bad omen of sorts in the young Trump administration which is itself a mix of successes and confounding missteps.

That said, we should give Spicer some credit for referring to a relatively overlooked fact of World War II history —  that Hitler declined to use chemical weapons (in the context of warfare, to be very clear!).  Spicer doubtless thought that he had a sure winner with the media and political class: comparing anyone to Hitler is surely the ultimate insult in today’s intellectual and political climate. He probably didn’t think this one through very well, but what he was probably thinking was that World War II did not see poison gas being used in battle between armies as it was in the trench warfare of World War I. This clearly was an argumentum ad Hitlerum  that went terribly wrong.

Spicer made this point in trying to underline the dastardliness of Bashar al-Assad in his supposed use of chemical weapons “against his own people.”   “We didn’t use chemical weapons in World War II,” Spicer explained, “You know, you had someone as despicable as Hitler who didn’t even sink to using chemical weapons.”

He was asked later in the press conference by a reporter to clarify his provocative comment, to which Spicer responded, “When it comes to sarin gas, [Hitler] was not using the gas on his own people the same way that Assad is doing.”  Naturally, from the perspective of our MSM, this was a horrifyingly obtuse explanation.  One could infer from this that while Hitler used gas on Jews in the concentration camps, perhaps these after all were not “his own people”; and in that sense, we can say that Hitler did not drop chemical weapons on his domestic opponents in the manner that Assad is alleged to have done.

And what is even more ironic is that Winston Churchill, a man who has now been deified, was perfectly ready to use chemical weapons on the Germans, had the Germans succeeded in landing an invasion of England (codenamed Operation Sea Lion).  Churchill felt that it was fair game for the British to use chemical weapons to defend their own people if necessary, and therefore actually had less moral scruples than Hitler himself in this regard.  After all, Hitler was in a perfectly analogous situation when the allies invaded Normandy, and pushed on into Germany.  Alas, in the summer and fall of 1940, the Germans could not master the air in the Battle of Britain, which they considered a prerequisite for an invasion of England; and were therefore saved a rather savage attack on their landing armies. From Operation Sea Lion:

The seriousness of RAF planning for gas attack against the invader was reflected in its establishment, in September 1940, of a specific committee to deal with chemical warfare, which displayed the ruthlessness that galvanized Britain at this time.  At the first meeting, the use of phosgene was discussed, which one officer described as ‘a very suitable weapon against the German civilian population’, particularly because so few German citizens, in contrast to the British, had gas masks. By this stage, as the committee was told, the RAF had worked out a thorough anti-invasion scheme, known as the ‘Gas Plan’.  This involved sixteen squadrons of aircraft in Bomber Command that, in an emergency, were designated for duty in spraying gas or dropping bombs on the invader. (199)

As for Churchill himself, “[he] made a decisive intervention at the end of the month.  In a memo to the Chiefs of Staff, he urged a rapid increase in the production of chemical weapons, as well as the development of further plans for their deployment” (197).   Other British military officials felt that the use of chemical weapons on a German invading force would be a “departure from our principles and traditions.”

I don’t describe this in a spirit of moral condemnation of the British necessarily, but merely to demonstrate this historical fact which is so dissonant with the good and evil dynamic with which the Allies and National Socialist Germany are generally viewed; and of course, to demonstrate the probity of Spicer’s off the cuff statement.

Perhaps this inconvenient historical fact is what has got the Jewish activist groups so up in arms; the Anne Frank Center has called for Spicer’s dismissal, which seems a bit heavy handed.  Many now feel that Spicer was somehow denying the Holocaust, or at least forgetting to mention it.  He has of course issued a written apology:

In no way was I trying to lessen the horrendous nature of the Holocaust. I was trying to draw a distinction of the tactic [sic] of using airplanes to drop chemical weapons on population centers. Any attack on innocent people is reprehensible and inexcusable.

In his spoken comments he continued in his mea culpa, “My goal now and then was to stay focused on Assad and I should of [sic] and I’ll continue to make sure I stay in my lane when I talk about that.”  Notice that “should of” instead of “should have.”  This is the linguistic sloppiness to which I have referred.

I have a weird habit of watching these press conferences; there’s something about the dynamic of the hapless Spicer withstanding the virulent hatred of the mainstream press that I find simply entrancing.  The scorn in the tone of the journalists’ questions and the hostile glow in their eyes is so inappropriate that I somehow cannot look away! While watching this particular press conference, I was indeed pretty surprised during this moment — before it had become the “next big controversy.”  My eyebrows were raised: did someone just mention something non-defamatory about Hitler?

What made it all the more astounding is that the Press Secretary is a positon which is obviously politically sensitive, where every word is parsed.  Again, Sean Spicer is not quite the man to parse his words carefully enough for the vultures in the Lügenpresse who are waiting to pounce.  This latest stumble, though interesting in the ways outlined above, almost comically demonstrates his unfitness for this position.  Not because his comment was necessarily offensive, but because he does not have the proper skill-set for this job.  Given how admittedly inarticulate Trump himself is, the last thing the president needs is a non-eloquent spokesman.

But to step back, let’s not forget that Mr. Spicer’s interesting comparison of Hitler and Assad was made in the service of justifying hostilities against Syria, which, to all appearances, is a conflict perpetuated for the furthering of Israeli/neocon/Jewish interests.  That is certainly not a noble cause, yet it adds another layer of irony insofar as the very interests he was attempting to serve are now the ones attacking him.