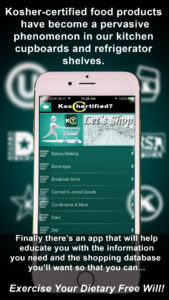 Go to Koschertified.com to upload the app.

Many in our movement are often heard complaining on podcasts and in the comments sections of too much talk, but no action.  Sure, it would be both practical and effective if our politicians represented our interests and took action on our behalf,  but that’s a pipe dream!  Also, it is certainly unreasonable to expect most patriots and White nationalists to find their way to UC-Berkeley every time an Alt-Right or conservative speaker gets silenced.  And do we all possess the same courage as that recently displayed by “Stickman” wading into a seething throng of antifa?

Actually, some of the most common demonstrations of power by our adversaries has been in their dominating critical industries, creating monopolies, and doing it all with the host majority blinded to its very existence or protecting themselves constitutionally through our freedom of religion.  Some of their power plays have been accomplished by means of boycotting (e.g. in their methods of acquiring newspapers or sending others to bankruptcy with diminished advertising revenue; or in their political and economic opposition to Germany in 1933).  In fact, just look how aggressively the BDS movement is being counter-attacked.  They understand the power of the boycott, and in their world only they are permitted access to use it.

So why am I bringing this up, you may ask?  Just the other day my girlfriend discovered a new app to help her in her grocery shopping: KosChertified?  It was less than $2, strikingly different than most, and as she knows well the direction my politics leans, she decided to share it with me.  I searched through its contents and couldn’t believe my eyes!  You would have thought it was written by an investigative reporter from Red Ice!  But it wasn’t.  Here in my palm laid the 21st-century tool that delivers both an expose’ of the little-known kosher-certification industry, its controversial conflicts of interests (especially with our interests), and a database of food products that haven’t been certified kosher!  Now here was something we could use ourselves, I thought.  Looking at the app’s website, www.koschertified.com, one finds that “over one million food products have been certified kosher!” (Note: This app is only for the United States.) Clearly this kosher sector of the food industry falls into that discussion on power above — where most ordinary people are simply oblivious to their total domination.  In fact, glancing through the app’s convenient grocery list application one finds numerous food categories that have a real scarcity of non-certified products — and some are empty, like sports drinks and horseradish!  So what does this portend for our grocery shopping future?  Perhaps the possibility of having absolutely no choice — fifteen aisles of products all having been blessed by one of the many rabbinical agencies that oversee every detail of the food we buy!  And I’m sure this will be a free service, so that they can “be the light unto our nations.”

But seriously, there seems to be just enough non-kosher goods right now that the end-user can shop and fill their refrigerator and cupboards while mostly avoiding this religious intrusion into our lives.  However, the reality is that the “one million kosher products” is not going to go down, but rather up.  So we’d have to act now.  We are presently in a small window of opportunity where we can use an app like this and make a statement no matter where you live!  In fact, there’s a button in the KosChertified? app that encourages all users to contribute products that they find locally to be added to their database, so as to help create a more robust selection and more choice of food that’s not kosher-certified.

Too much talk and not enough action in the alt-right movement?  Well, there’s no excuse anymore!  As the slogan on the KosChertified? app boldly instructs: “Exercise Your Dietary Free Will”!   The app grants you the wisdom and the freedom to accomplish something that’s finally in your interest.  There’s enough content included to raise a powerful protest…or even a boycott.  Quoting from the koschertified.com website, “It’s time to get K-Wise!”  Our adversaries have worked and networked against us by means like this throughout history, so why can’t we?  This could be the perfect mechanism to unite us.  It can be used to parlay into a conversation on that dreaded topic that’s so politically incorrect!  “Hey, are you K-wise yet?  Well, that bottled water in your hand…it’s certified kosher, and why is that?  It’s water!”  And you know where to go from there!

“Clandestine Kosher markings on canned goods symbolize how a bold minority can impose its will and even its religious observances upon an apathetic majority.”  This is a quote brought back to life from a New York Times article dated March 28, 1954 entitled “D.A.R. Joins critics of ‘Kosher’ Speech,” and presented in the app.  The speaker, a Mrs. Henry D. Strack of New Jersey was emboldened to bring attention to a topic of vital interest to her patriotic audience, as she was a member of the Daughters of the American Revolution.  Her courageous actions only brought her formal rebuke, obscene hate mail, and a scornful New York Times article meant to put her in her place — for eternity.

It worked.  To this day, hardly anyone knows that the preponderance of their grocery products, and even many non-food items (like aluminum foil) are kosher-certified — and that they are paying for this.  Now, 63 years later with the help of the modern smart phone, the KosChertified? app can be used to resurrect that courageous lady’s voice!  May I dare ask, can you match the boldness of Mrs. Strack?