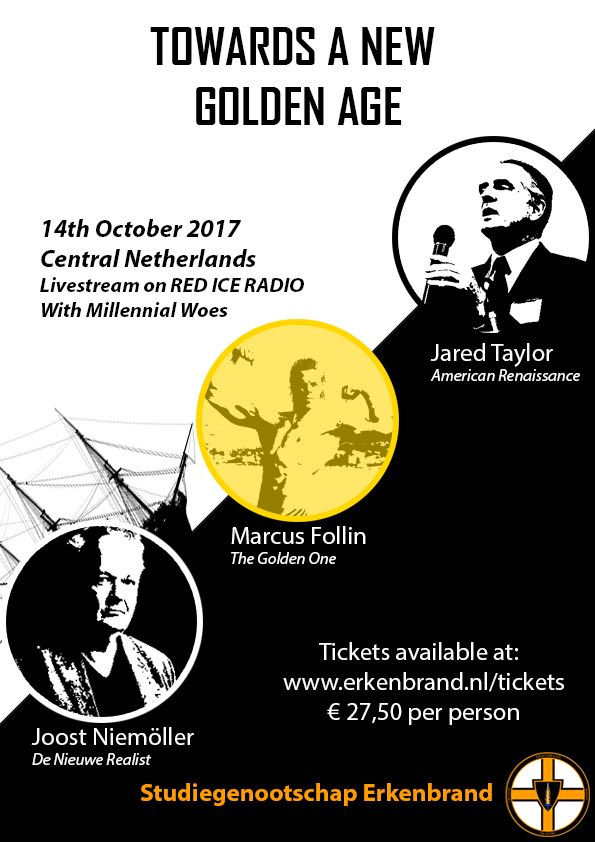 The Dutch alt-right and identitarian group Erkenbrand, which has rapidly grown over the past years, will be organizing a major conference on October 14, 2017. Foreign visitors are very much invited to attend the conference, which will be held in English, as an opportunity to network across borders and foster an international brotherhood of awakened Europeans.

Tickets can be purchased at: http://www.erkenbrand.nl/tickets/

The speakers will include:

– Jared Taylor: a renowned race-realist and White advocate. He is the publisher of American Renaissance and the author of White Identity: Racial Consciousness in the 21st Century.

– Marcus Follin – aka The Golden One: a Swedish body-builder and popular vlogger. He promotes a return to masculinity, martial virtue, and national identity.

– Joost Niemöller: a journalist who has written for leading Dutch newspapers and magazines, while never shying away from controversial topics. His 2012 book The Immigration Taboo: Ten Scientists Discuss the Facts provides a sobering, fact-based look at the costs of immigration to the Netherlands, including loss of social trust and ethnic differentials in IQ, crime rates, and welfare use. The book was widely discussed in Dutch newspapers and television shows. In 2013, he was fired by the Christian-oriented public broadcaster NCRV for an article he wrote on Martin Luther King Memorial Day asking whether differences in IQ could explain the social condition of African Americans. Niemöller, a non-ideologue and self-styled “realist,” has continued to write on controversial topics despite the threats of political correctness.