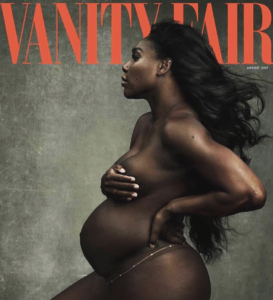 The August, 2017 issue of Vanity Fair magazine has the naked and very pregnant tennis star Serena Williams on the cover.   When I saw it, a thought flashed to my mind: “Ingrid Bergman wasn’t naked on the cover of Life in Dad’s shop.”   I’ll explain.

My dad was a barber in downtown Saint Paul, Minnesota.   This was back around 1950; I was a little kid.   Dad’s shop—Walt’s Barber Shop—had magazines on a small table for his customers to read while they were waiting for their haircuts.  Among them was Life, a popular magazine like Vanity Fair is today, lots of photographs, news of the day, profiles.  The Paramount movie theater next door gave Dad free passes to its movies for having a sign in his shop advertising the current feature.  Mother, Dad, and I used to go to the movie that was showing at the Paramount just about every week. 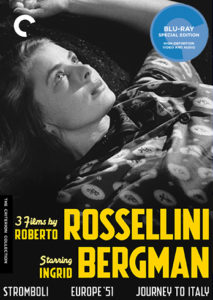 One early evening when we went to the Paramount to go to the movie, there were eight or ten people with picket signs marching back and forth in front of the theater—don’t go to this movie.   I didn’t catch on to the details, but I knew it had to do with the actress Ingrid Bergman, who was starring in the movie and very big at the time—Casablanca, etc.—doing something really bad.   What it was, I later found out, was she had had an illegitimate child with the film director Roberto Rossellini; both of them were married to other people at the time.  The outrage over that had led people to picket her movies.   It was a major scandal.  She was denounced on the floor of the U.S. Senate no less—“moral turpitude” and so on (see Marlow Stern, “When Congress Slut-Shamed Ingrid Bergman”).

Flash forward from the beginning of my life to now, near its end, and there’s unmarried, unclothed, and sort of overwhelmingly pregnant Serena Williams—the father, Alexis Ohanian, co-founder of Reddit—on the cover of Vanity Fair. No way, adultery a part of it or not, that Ingrid Bergman would have been naked and pregnant with Roberto Rossellini’s child on the cover of one of Dad’s Life magazines.

The cover article in Vanity Fair by Buzz Bissinger doesn’t condemn Serena, just the opposite, and illegitimacy never comes up.   Its beginning gives a sense of the direction it takes:

This is a love story.

It wasn’t seamless, starry eyes at first light.  There was a discovery, unexpected and shocking.   There were moments of really getting pissed and the standard irritation that comes when one half of the whole kept leaving the suitcase in the hallway.  But there were also moments of unplanned intimacy that is the only true kind of intimacy in a love story, soft touches and laughter and absurdity, because you need absurdity in a love story, since love is slightly absurd anyway, a feeling that, like eternity, is indefinable.

I’ve checked into it, and that’s certainly not how they wrote about Ingrid Bergman and Roberto Rossellini (including using words like “pissed” and writing under names like “Buzz”),

And it should be noted that if there had been a racial element to the Ingrid Bergman affair (Williams is black, Ohanian white), it would have been front and center in the Life magazine article, with the word “miscegenation” in there somewhere.  Race is never mentioned in Vanity Fair.

What am I left with?  That a naked, pregnant Ingrid Bergman on the cover of Life magazine along with a fawning cover article about her wasn’t in my dad’s barber shop, and now would be, sums up the progress, regression, however you want to look at it, that’s taken place over the span of my life.  And that how that happened is the big story of my time on earth.