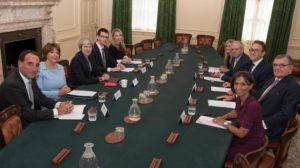 Theresa May meets the Community

To paraphrase Wordsworth: “Mossad, at this hour England hath need of thee!” Vile anti-Semitism is again being peddled in a national newspaper here and again the British authorities are refusing to act. Mossad needs to step up to the plate with some of the strategic assassinations for which it is justly famed.

Working very hard for the Jews

In “State of Hate,” I described how the newspaper in question claimed that Jews are “outsiders” prone to “paranoia, arrogance and insecurity.” Now the newspaper is peddling an even more toxic anti-Semitic stereotype, namely that Jews wield excessive political influence and “like to be close to power”:

Michael Goldstein: Corbyn’s Labour “did not want to understand” the Jewish community

Michael Goldstein, the newly elected president of the United Synagogue, has revealed he was a long-time supporter of the Labour Party – but admits he “struggled” over who to vote for in the most recent general election. … Mr Goldstein said that he feared Labour under Jeremy Corbyn “did not want to understand” the community. …

He spoke openly of his belief that Labour under Jeremy Corbyn had become an unattractive proposition for his membership. He said: “I just think that Tony Blair understood the community and from what I can see the current leadership just do not want to understand it in terms of its needs and what’s important to it. There doesn’t seem to be any effort being made to show why the statistics are showing the kind of support they are for the Labour Party. Under Tony Blair he worked very hard so that there was a perception and a reality that he understood the community. It is the complete opposite under the current leadership.” …

[On the other hand] Rabbi Rich … recalled what he said was “a clear switch” within the community from supporting Margaret Thatcher to Tony Blair. He believes there will be a “similar switch” to Jeremy Corbyn because many in the Jewish community “for very good reasons” like being close to power. … (Michael Goldstein: Corbyn’s Labour “did not want to understand” the Jewish community, The Jewish Chronicle, 4th September 2017 / 13th Elul 5777)

It’s horrifying that this “loathsome, repellent” anti-Semitic filth is being peddled by the Jewish Chronicle, Britain’s leading Jewish newspaper. The claims made there are ludicrous. How is it possible that Tony Blair “worked very hard” to convince Britain’s tiny Jewish community that “he understood the community” and “its needs and what’s important to it”? Blair was responsible for the welfare of approximately sixty million British citizens. Only an anti-Semitic conspiracy-theorist would claim that he gave special consideration to the tiny sub-set of those citizens who are Jews.

“The issues most important to Jews in the UK…”

And look at the even more loathsome claim that “many in the Jewish community ‘for very good reasons’ like being close to power.” I can interpret that only as meaning that Jews seek to influence British politicians and ensure they don’t act against Jewish interests. But the hate-peddling Jewish Chronicle hasn’t stopped there. Its toxic meme of Jews as political puppet-masters was on brazen display again a few days later:

The Jewish Leadership Council led a delegation of communal leaders to meet Theresa May at Downing Street today. They discussed issues including antisemitism, social care, mental health education and security with the Prime Minister. It is understood the community representatives thanked Mrs May for “speaking out against antisemitism” and for her “unwavering support” for Israel.

The talks also included an update on the plans to build a Holocaust memorial and learning centre in London. Mrs May said: “I was pleased to meet community leaders today to hear directly about the issues that are most important to Jewish people in the UK. I want to take this opportunity to reaffirm my long-standing and total commitment to the security of the Jewish community and I will do everything possible to fight antisemitism and all forms of hatred and prejudice in our country. Today’s meeting was also an opportunity for me, as Prime Minister, to celebrate the incredible contribution that the Jewish community makes to our country.” (Theresa May reiterates support for UK Jews in Downing Street meeting with communal leaders, The Jewish Chronicle, 7th September 2017 / 16th Elul 5777)

This is surely fake news. Thanks partly to the Jewish immigration minister Barbara Roche, Prime Minister Theresa May is responsible for the welfare of significantly more British citizens than Tony Blair was. Why would she find time in her very busy schedule to make extravagant promises to and lavish sycophantic praise on one tiny sub-set of those citizens, namely, the Jewish community?

Worse still, the Jewish Chronicle claimed that “Gerald Ronson, Community Security Trust chairman,” was present at the meeting with PM May. Ronson is a convicted fraudster who was jailed for his part in a multi-million pound share-trading fraud in the 1980s. The Jewish community would surely never allow a convicted fraudster to occupy such a prominent and responsible position, let alone include that fraudster in an official delegation to Downing Street.

Can you see why I think Mossad needs to organize some strategic assassinations? Anti-Semitic stereotypes and conspiracy-theories are being openly peddled in the pages of the Jewish Chronicle. Nothing is being done to punish the hate-journalists in question, who remain free to continue spewing their loathsome filth.

Anglicans and Catholics not included

Compare the very welcome action taken against hate-politician Sarah Champion, who was forced to resign from the Labour Shadow Cabinet for claiming that “Britain has a problem with British Pakistani men raping and exploiting white girls.” Champion based this claim on nothing more than the hate-fact that British Pakistani men are raping and exploiting White girls “in every corner of the country, from Rotherham and Rochdale to Oxford and Bristol.”

Does she not understand that “Reality is Racist”? If she didn’t before she was forced to resign, we can hope that she does now. But her toxic racism has encouraged more hatemongers to crawl out of the woodwork:

The heads of UK Sikh, Hindu, and Pakistani Christian organisations have said that Sarah Champion should not have been “sacked” from Labour’s front bench for speaking out on the racial aspect of grooming gangs. “We commend Sarah Champion and the Muslim councillor Amina Lone for speaking up on a clear trend in criminality: the conviction of men of largely Pakistani Muslim heritage in sexual grooming cases”, they wrote in a letter to The Times [of London]. Champion was forced to resign as shadow secretary of state for women and equalities after pointing out that Britain “has a problem with British Pakistani men raping and exploiting white girls”, in an article for The Sun last month.

The letter, signed by Lord Singh on behalf of the Network of Sikh Organisations and by groups including the British Pakistani Christian Association and Hindu Council UK, noted it is “not just white girls” who have been targeted by grooming gangs. For decades Hindu, Sikh and Christian organisations have raised concerns about grooming gangs. The latter have plagued our communities, so much so that a BBC documentary on the targeting of Sikhs was aired a few years ago. The common denominator is that victims almost always tend to be non-Muslim girls,” stated the signatories, adding: “We are dismayed by the Labour leadership’s weak response. We are not willing to see the betrayal of victims, who are being sacrificed on the altar of political correctness.

“It’s not racist or Islamophobic to raise a matter of significant public concern,” continued the letter, which praised Champion for “continu[ing] to make a courageous stand” on the issue, alleging that the Left “turns a blind eye to sex crimes”, and stating she would “rather be called a racist than turn a blind eye to child abuse”, since being pushed from Labour’s front bench. …

In response, a spokesman for Labour leader Jeremy Corbyn told the Daily Mail: “These heinous crimes are committed by people of all backgrounds. Stigmatising entire communities is wrong, and damages the interests of victims of sexual abuse and the rigorous investigation into the underlying causes of that abuse.” The Labour leader has insisted that Champion left the shadow cabinet of her own accord, but at the time of her departure he said: “We are not going to blame any particular group, or demonise any particular group, the issue is one of safety of individuals.” (Religious Groups Slam Corbyn for Firing MP over ‘Courageous’ Grooming Gangs Warning, Breitbart News, 5th September 2017)

Well, enough with my sarcasm, already. It’s plain that Jeremy Corbyn and the Labour party do not care in the slightest about the mass rape of kaffirs by Muslims and do not intend to do anything to address the problem. It’s also plain that the Church of England and the Catholic Church are as indifferent as the Labour party. After all, they did not join “Sikh, Hindu, and Pakistani Christian organisations” in condemning what happened to Sarah Champion.

So be it. Unlike Mossad, I don’t believe in the extra-judicial assassination of a nation’s enemies. I prefer those enemies to have a fair trial before they are punished for their crimes. And dubious though I am about the death penalty, it does seem the only fitting punishment for the blatant treachery of Blair, Corbyn and Justin Welby, the current Archbishop of Canterbury.