I was walking with the nice Bulgarian girl I had met the day before.

We stepped over puddles and little rivers of piss. You try not to, but you can’t help but notice that the Pest side of the city smells like a giant urinal after 6 pm.  And it was gypsy Christmas the day before. Hungarians tossed all their unwanted junk into the streets and hordes of gypsies rummaged through the scrap, claiming what they wanted. Some of the gypsy men had bats to guard their junk. I learned that Gypsy law states that anything on the street automatically belongs to them, and they enforce that law.

All the junk still hadn’t been cleared yet, although we try not to pay attention to it and we laugh it off as best we can. We have already gotten used to the beggars and bums nestled in the doorways, under the scaffolding and on the corners of the streets. We block them out of our vision as well.

And then we reach the square in front of the famous Saint Stephen’s cathedral. There is a wine degustation going on that night, and there was one pretty much every night that week. It is picturesque and romantic.

Christmas lights suspended above, benches with White, soft and jolly Europeans in the middle. 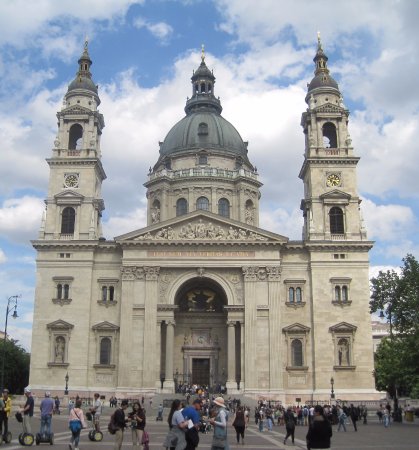 We buy a bottle and sit down in the center of it all. We start talking and drinking, surrounded by refined Europeans and ogling Chinese tourists. One small group of them sits down next to us, taking photos.

We pay them no mind.

A local with a white lab on a leash strolls by. He scampers up to a girl with long hair sitting on a bench and whines. She coos and pets the cute dog.

The scene begins to unfold with the same consistency that all the evenings in historic downtown Europe have unfolded for me in the last three years of travel. Truth be told, I am starting to fear that this evening will just bleed into the weary, hazy memory of all the others.

But then a crowd of British Blacks pimp-rolls into the square. The white lab that had been frolicking around its owner a moment before suddenly lurches at the large one in front, barking like mad. The Black jumps back, the owner slides along a few smooth cobblestones, pulling at the leash, the pudgy European sitting nearby falls off his seat with surprise and I snort on my wine, causing the Bulgarian girl to laugh.

The fat man falls right on his butt, but doesn’t spill a drop of wine in his glass. I can’t help but be impressed by his resolve. Meanwhile, the Black puts up his fists, saving face by pretending to box with the dog. The owner apologizes and scampers away. The Chinese girl opposite me looks up from her phone in surprise, catches my eye and smiles.

Embarrassed, I smile back and the rest of the wine in my mouth spills down my chin.

After I wipe my face, I tell the Bulgarian girl that dogs don’t like Blacks. She seemed troubled by that thought.

“You should visit Africa and then judge,” she concludes after a pause.

“Why bother,” I mutter into the bottle. “Everywhere I go, I see Africans. More and more every day. Everywhere. ”

The group pimp-rolls past us. The head of the pack is still making punching motions with his fists.

She eventually nods her assent, feeling bad for agreeing with me. We decide to finish the bottle and head back, stepping over the piss, bums and gypsy trash again along the way. We try not to pay attention to all the Africans in the streets this time as well.

Our host assured us that the city was safe and gave us directions to get to the center. He was tall, blond and blue-eyed.

“Harmless as a golden retriever,” she later said about him.

I was together with my faithful Russian companion. It was Christmas time and the city was beautiful.

Germans gathered around stands in the squares and courtyards and along the road, sipping punsch and gluhvein, chatting amongst themselves. They all looked so nice, so tall and well-put together. We were keen on joining them and partaking in the tradition like locals.

Most treated us coolly if cordially like most Germans do people from Eastern Europe.

We shrugged it off and focused on warming up with the hot punsch and schnapps and frankfurters with sauerkraut.

That was yesterday though, and today we didn’t go to the Christmas markets. There was a truck of peace that plowed through a similar market in Berlin, and if we are honest with ourselves we don’t want to risk it today.

“Still, what are the chances?” She jokes.

I laugh too, but neither of us wants to prove our bravery today. The museum it is.

And the museum is almost completely empty when we get there. We stand in the Nazi exhibit, looking at the tattered swastika standards and the stahlhlem with a bullet hole in it.

The museum is one of those modern, minimalist kinds. It’s not very interesting.

As we leave, the curator approaches us. She has overheard us speaking Russian and she tells us that she’s a Pole. We are happy to chat with a familiar eastern face, as the locals, with the exception of our AirBnb host have all been incredibly aloof. The Polish woman nods her head and agrees as we mention it. We can tell that she doesn’t get along well with them either.

She has also heard about the attack.

With no one in the exhibit, and the Nazi standards ever-so-gently fluttering from the climate control system vents pumping their stale, sterile air into the room, she starts to loosen up and talk and so do we. She tells us casually us that Armageddon is at hand.

“The army of Satan is already here,” she says to us.

That sent a shiver down both our spines. Empty museum exhibits and wide-eyed old ladies talking about spooky things go together a little too well.

She went on and talked about the coming of the antichrist.

I figured that this was cult-talk. She had joined a sect probably. But then she had to join something, I suppose, and I couldn’t fault her for that.

I would have to too someday.

She stares back at me, eyes gleaming and nods her head furiously.

“And the armies of Satan?” I press.

“They’re coming to Germany in the thousands every day,” she replies.

Well, that took me aback. It turned out that this old woman believed in the exact same things that I did. Only, she had to come to this realization through scripture and prophecy, whereas I had relied on statistics and far-right agitprop. I laughed with relief.

But my companion didn’t share my enthusiasm. She looked pale and spooked.

I chatted some more with the old curator, and we got along famously by the end of our talk.

She was disappointed by the locals. She said that the Germans in Munich were completely lost.

But the bell sounded that the museum was close to closing, so we took our leave. We start walking down the stairs towards the exit, but we don’t get far.

“Go back and check,” she whispers to me.

I laugh again, but I demur. It is indeed worth checking just to make sure we didn’t just spend twenty minutes chatting with a ghost. I go back into the exhibit, and of course, she’s nowhere to be found. We check everywhere and begin to feel our skin crawl.

We decide to leave quickly, going back down the same steps. Naturally, she’s waiting downstairs for us with an anxious look on her face. She gives us her number in case we need any help. I write it down and say goodbye to my first local friend.

We come back to our place later in evening. Our host was already there, as cheery and friendly as ever. We decide to broach the topic, since he was several beers in anyways.

“Aren’t you worried about what’s happening?” We ask him.

He dismisses our concerns with a breezy wave of his hand. “It’ll be fine,” he says, “it’ll all work out in the end.”