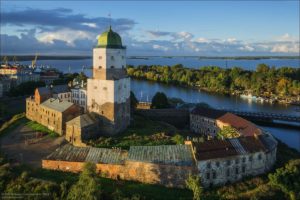 There is this little town along the Russo-Finnish border. I ended up taking a trip there entirely by accident.

And there’s a medieval keep right on top of a rock jutting out in the middle of the calm and cold river that’s the main attraction of the town.

You get this feeling in the far North that you just don’t get anywhere else in the world. It only increases the further north you go. Especially summer begins. Everything gets bathed in that soft yellow glow and the sky takes on an azure quality that you notice peeking out between the tightly-wrapped white clouds. The sky is like cling wrap with little blue holes — it’s not so different from what I imagine living in a snow globe might feel like.

You feel it especially when the White Nights start. Everything gets wrapped up in a tired white blanket of soft light. It’s the closest thing you’ll ever experience to living in permanent twilight.

Tallinn, Helsinki, St. Petersburg, and Stockholm — they all lie on the same latitude. They are like a snow globe apart from the rest of the world. A microcosm of icy rivers, dirty swamps, and grey skies…

At least the Finns and Estonians get along somewhat alright — probably because of their genetic similarity. They are after all from a similar tribe.

You could be forgiven for having the impression that the far North is like a sort of White Urheimat. Naïve young man that you are, you might think that if you go there, you’ll see the great northern peoples of Skyrim holed in their winter keeps upon your arrival.

It feels natural and right that it should be this way. But then you actually go to these places…

Stockholm is overrun, there’s…just no other way to say it. Helsinki is only a little better. St. Petersburg certainly has a central Asian problem and Tallinn…well you get the feeling that it doesn’t have long either just looking at the Schengen tourists that mill around the historic city center.

In nu-Skyrim, there are no fur coats, no great bearded men lumbering through the streets. Hipsters with ironic waxed mustaches have taken their place. Tight jeans that show off the ankles…plaid shirts…homosexuals…liberal mecca…but at least some thin, cute-looking girls.

Overall, it isn’t what you’d expect it to be.

It’s funny that I should think about all this while in Vyborg.

See, Vyborg has the honor of being fought over by every single northern people in the area. The Finnish tribes lived there first, only to be brutally colonized by the Swedes. The northern Russian city-state of Novgorod fought the Swedes to a standstill and nothing changed until Peter the Great ended Sweden’s imperial ambitions centuries later. Then the 20th century brought even more wars. Reds vs Whites. Finns vs Russians.

The city was also destroyed many times over.

Now the Russian tricolor flies from the top of the medieval keep. I’ve seen used car lots in America fly bigger flags…but this one serves its purpose I suppose. To the victor go the spoils – and sometimes both the victors and the vanquished need a reminder.

There isn’t much left in Vyborg worth fighting over now though.

The city is still in ruins. The downtown is littered with the carcasses of old buildings. The broken walls jut up into the sky like the ribcage of some massive beached whale and kids flit in and out of the holes where the doors and windows must have been. They giggle and scream in Russian. Lots of blond, blue-eyed types here.

Don’t tell the Swedes that though. Liberal and nationalist alike thumb their noses at the eastern barbarians who now inhabit their former colony city. Many seem to think that people to the immediate East of Sweden are the remnants of Genghis Khan’s hordes.

Don’t tell anyone living in this zone that this is the most dense blue-eyed, blond-haired gene repository on the planet.

Don’t tell them that this frozen belt is one of the most genetically unique places in the world.

I mean, feel free to try. But I wager you would never convince the average inhabitant that this is in any way something worth preserving. Judging from the rhetoric coming from these countries, they’re more than willing to go to war again soon.

Russians in general seem to be able to do Russify everywhere they go. If there are any ethnic Finns or Swedes still living in Vyborg – many were deported – they do not make their presence felt at all. The only traces of Swedishness or Finnishness are solely in the architecture, and in the rocky Scandinavian terrain, which contrasts with the flat Russian steppe, but not in the character of the city at all.

In that sense, Vyborg represented a kind of trade-off in my opinion. Because the Russians took it over, it bears the hallmarks of World War II or the Collapse from the 90’s. No money to fix it up and SWPLify the downtown for European Boomer tourists.

I can’t help but notice that it’s safe there at night though.

And I would know, seeing as I got stuck overnight when I missed my train and ended up wandering the streets.

Come the morning, there were children playing in the dilapidated fountains, the church ruins and in places that they probably shouldn’t.

Russians will do that.

They see a fountain and they send their kids to play in it, a monument and the kids are all over it, climbing up and down the statues of heroes and poets.

I’m sure a Swede or a Finn would find it disrespectful.

But I liked it.

If anything, it makes the monuments come alive again as if the man ensconced in the bronze has a chance to be a part of our lives again.

But maybe I’m getting a bit too sentimental with my observations.

Frankly, it’s just pleasant to see all the young families and all the cute blond kids running around everywhere. You see a lot of that in the small cities of Russia. The parents let the kids play in the downtown, and by doing so, the whole city feels more organic, more living and breathing than the ossified cities of Sweden.

See, there were no Swedish children playing around in the downtown of Stockholm, Uppsala or Malmo. None in Copenhagen either. 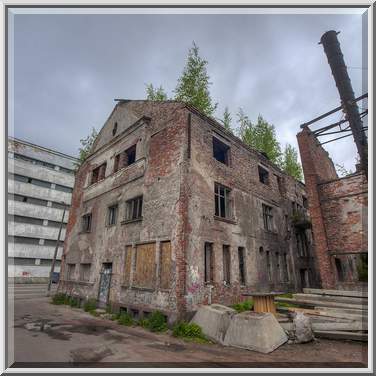 Parts of Vyborg look like they’ve been through Hell and back. But it’s safe at night. Kids play in the downtown. And last but certainly not least, there aren’t brown people everywhere.

It feels like Vyborg is a good metaphor for Russia in general. The best parts of European civilization have been bruised and neglected, ruined even…But also preserved under permafrost.

Vyborg could have been like Stockholm’s old town — beautiful and clean… but sterile and inhabited by dying Boomers and foreigners.

That’s just the trade-off you have to make now it seems. Either you have your First World living standards and a future where your people is ethnically replaced or you live in absolutely Spartan conditions … but you survive.

I can’t help but feel that places like Vyborg are the best places to go sight-seeing to see what Europe was once like during its most violent and turbulent period, before it all started to change. And I can only wonder what happened. We used to be willing to fight tooth and nail for the smallest keep marooned on some rock in the middle of some tiny ice-infested river…

We would level entire downtowns, pump shells and rounds into enemies that looked just like ourselves. And most of us remain willing to do it all over again over the flimsiest of pretexts. But now, not a word about the plague creeping up on us from the south, replacing us, taking over those nice shiny pearls that our ancestors built in the frozen north.

And once they get to Vyborg, there won’t be anywhere else to run away to.