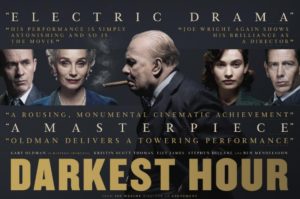 Darkest Hour centers around the conflict of whether Winston Churchill, at the low point of the war from his perspective in May of 1940, should negotiate/capitulate to Hitler, or fight on against all odds.  We all know the basic contours of this history.  While the expected dramatic liberties are taken, the essential thrust of the debate within the Churchill cabinet presented in the film is more or less historically accurate, and thus is food for thought.

We know that Neville Chamberlain was the “appeaser,” but perhaps less known is that he and Foreign Secretary Halifax were in the process of putting out peace feelers shortly before the Dunkirk evacuation, and that Churchill himself almost resigned himself to that path—at least, according to the film.  Indeed, as portrayed in the film, Churchill did make some ambiguous statements indicating he might be willing to “consider” some terms for peace with Germany.  But ultimately he thought that could only be done from a position of strength; i.e., a military victory.  This interesting conflict, the inner conflict with which Churchill grappled, is the focus of the film.

The event which averted that eventuality, if we are to take the film’s version of events, is Churchill’s speech to Parliament (“We shall fight them in the air…”)  which rallied the support of those who were skeptical of his hawkish attitude towards Germany, many of whom were in his own Conservative party.  In fact, the reception of this now famous speech was more lukewarm in Parliament and was not broadcast on the radio as portrayed in the film (Churchill recorded it after the fact, hence the version of this audio we hear today was not recorded live during the speech).

If we are to compare this to the film Dunkirk, just in the sense that they are both in the World  War II genre and both received lots of buzz, the Darkest Hour is more enjoyable and substantive.  Whereas Dunkirk was a hodgepodge of mindless action scenes with quick-cuts which made one unsure what exactly was happening, Darkest Hour has a more deliberate pace and will be of interest to a more high-brow audience.

Also in Dunkirk there was a notable absence of any reference to those mysterious people fighting on the other side of the war.  In Darkest Hour we have a more interesting decision, which is to intersperse the film with speeches from Hitler, playing on a radio in the background, as a kind of ominous menace for Churchill.  The Führer’s staccato, guttural German so contrasted with the sensibility of the English that it certainly added to the dramatic tension of the film.  A motif of WWII films, also seen in Stalingrad, is a radio playing the speech of a Nazi leader, only to be abruptly turned off in disgust, symbolically representing how we, the audience, are also meant to “shut off” their message, lest we reinterpret that message in the context of modern times.

We’re all well aware that Hollywood focuses its considerable powers in lionizing and demonizing historical figures according to the political agenda of the elites who run Hollywood and the rest of the media.  Churchill, portrayed masterfully by Gary Oldman, continues to be a quirky and endearing figure—his motivations are certainly much criticized in Alt-Right circles, while his racialist beliefs are coming under increasing fire from the left.  Yet Churchill is a rare alpha White male who is lionized in pop-culture.

The artistic details of the movie (acting, cinematograph) are frankly less interesting here than the place which World War II holds in the consciousness of the West, and the extent to which Darkest Hour reinforces that consciousness.  Because 1945 is a kind of crossroads for Western Civilization, we must always be vigilant in monitoring the public perception of “the road not taken,” and consider “what if.”  Darkest Hour is especially provocative in that it shows how close the Churchill government was to reaching terms with Hitler’s Germany, as France was about to do.  The British Empire would have been secure, so promised Hitler, who was otherwise positively disposed to the English.  Churchill certainly doubted Hitler’s sincerity; yet at the time reaching a settlement seemed like an eminently reasonable course of action, and one cannot let 20/20 hindsight obscure the fact that the conclusion of the war was not at all foregone.

The takeaway from my experience of viewing the film in the theater is that we apparently never tire of patting ourselves on the back for being “on the right side.”   Yet is it fair to consider “the road not taken” in light of the consequences of the road we have taken? It’s an Alt-Right trope and meme that the road taken ultimately ended up in catastrophe. Darkest Hour makes us consider once again how we can get from point A — a homogeneous Britain proud of its past circa 1940 … to point B — the disaster that the U.K. is now: a police state of the multicultural, anti-White left. Although the present dire straits of the Britain and the West are certainly not an inevitable result of the road taken, it is very unlikely that the road not taken would have led ultimately to similar results.

The theater in which I saw the film was populated by mostly baby boomers and some elderly Americans who had to be helped into their seats.  I could wax sentimental to share a patriotic, cultural moment with older generations; taking in a film which speaks to our shared heritage, and pays homage to the socially approved heroes of our civilization.  I too can appreciate the grandiosity of Churchill as a historical figure, an eloquent, larger-than-life man.

Yet I also felt that the theater audience sought to experience the dopamine rush in affirming their moral paradigm: “We’re the good guys, and we won.”  At the end of the film, a text read that five years later Germany would surrender, and the audience broke into applause.  How much longer will we affirm ourselves with these pieties?  Have they not noticed that we have bigger problems now than the problem than “Nazis”—whether these are historical National Socialists, or the new type routinely called Nazis (anyone who disagrees with liberals).

Regardless, WWII is itself a kind of poetic history. It cannot be changed, and hopefully we can yet overcome our present challenges.  In that spirit, Darkest Hour is an enjoyable film.