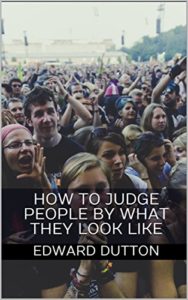 How to Judge People by What They Look Like
Edward Dutton
Self-published, 2018
107 pages, $14.19 paperback, free in Kindle

Anthropologist Ed Dutton will be familiar to some readers for his work with Richard Lynn (including the book Race and Sport) and as an occasional contributor to The Occidental Quarterly. He has just published a short book on physiognomy, i.e., the relation between physical features and behavioral tendencies.

We often hear that it is not possible to judge others from appearance, but there is plenty of evidence that we all do so, and not only in the context of mate-seeking. Dutton draws our attention to the General Prologue to Chaucer’s Canterbury Tales, where the poet carefully describes the physical appearance of each of the pilgrims, matching these with their personalities as revealed in their behavior and the stories they tell. The Reeve’s thinness of build is supposed to suit his irritability and quickness to anger. The Wife of Bath has a gap between her front teeth to suggest her sexual aggressiveness. There was a whole body of physiognomic teaching in Medieval Europe, where the subject was taught in universities until the sixteenth century. Unfortunately, much of medieval physiognomic lore had an astrological basis, limiting its scientific usefulness.

Might it not be time to reopen the question?

In 1966 psychologists at the University of Michigan conducted an experiment on 84 undergraduates who had never met. They had to sit in complete silence with each other for 15 minutes and rate each other on personality traits, simply by appearance. Each participant also sat a personality test. For three traits — Extraversion, Conscientiousness and Openness — the students‟ appearance-based judgements significantly positively correlated with the actual personality scores (Passini & Warren, 1966).

A later follow up study replicated the results for Extraversion and Conscientiousness using only mugshots.

Many homosexuals claim to have a “gaydar,” or faculty for recognizing other homosexuals at sight. A recent well-publicized study has provided empirical support for such claims. Kosinski and Wang (2017) designed a computer program that could distinguish between photographs of homosexual and heterosexual men with 81% accuracy. A control group of human judges achieved 61% accuracy. Figures for distinguishing between lesbians and heterosexual women were slightly lower, both for human judges and computers. This may indicate the greater importance of social factors in the etiology of lesbianism.

Obesity in the West correlates with low socio-economic status, low intelligence, and poor impulse control, but also with being friendly and gregarious. Slimmer people tend to be more conscientious, while unhealthy thinness is associated with neuroticism, depression, and anxiety.

Many physiognomic signals are mediated by testosterone, i.e., testosterone levels help determine both physical and personality/behavioral traits, so that the latter can be inferred from the former. High testosterone in men, e.g., tends to be associated with shortness, muscularity, broadness of the faces, chiseled jaws and even “shovel hands,” i.e., relatively slight differences between the lengths of fingers. High-T men are also hairier—except on the tops of their heads, where they are likelier to be bald. All these traits, therefore, tend to predict competitiveness, low impulse control, low empathy, and greater visuospatial, mathematical and systemizing capabilities.

Similar traits are even found in higher-testosterone women. Dutton reports:

I was at a conference at University College London in 2015. The university was trying to promote the idea that women have made an important contribution to science. The wall of the student refectory was decorated with photographs of living, relatively eminent female scientists. It was remarkable (to myself and my colleagues from the conference) how masculine the faces of these women scientists were.

Prominent secondary sex characteristics, such as large breasts in women, tend to correlate with a faster life history (r-selectedness), i.e. a tendency to live in the present.

Some physical traits are revealing within races, while comparisons across races are more problematic. For example, within races there is a correlation of about 0.1 between intelligence and height. But height comparisons between men of different races may not display this pattern, since northerly latitudes favor both higher intelligence and stockier builds.

Two Chinese researchers, Wu and Zhang, have found that certain physical traits tend to characterize criminals. The angle “from nose tip to two mouth corners is on average 19.6% smaller for criminals than for non-criminals and has a larger variance.” In addition “the upper lip curvature . . .  is on average 23.4% larger for criminals,” and the distance “between two eye inner corners” is slightly narrower (5.6%) for criminals than it is for non-criminals. Criminals also have less symmetrical faces and greater variation in features generally, possibly because of an association between criminal tendencies and higher mutational loads.

Some traits proverbially associated with red hair may result from the MCIR.3 gene, which causes not only red hair but greater susceptibility to pain and cold.

It is important to remember that most physiological correlations are low, often around 0.1, so any individual trait is not likely to be especially revealing. A combination of several traits is necessary for more reliable predictions.

This is a fascinating book on a topic that has generally been ignored in the research literature. Highly recommended.