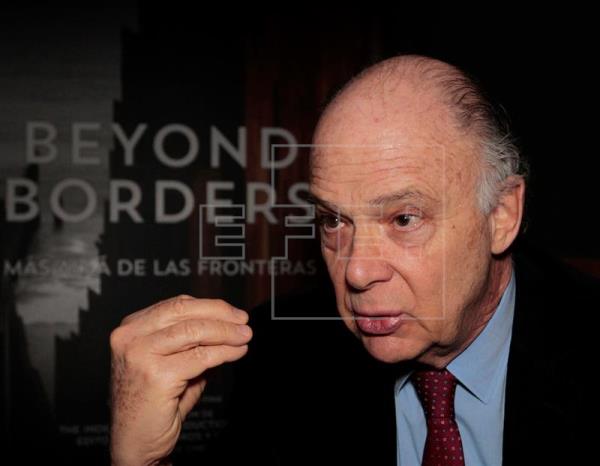 Enrique Krause. The background is for his documentary “Beyond Borders” (in Spanish).

This piece is an update of my very brief TOO note of 2016, “Enrique Krauze.” Krauze is a Jewish-Mexican historian, essayist, editor, and public intellectual; he can be read in all the most elite places, even dispensing his wisdom in the pinnacle of the journalist profession, the New York Times. In the October, 9, 2017 article “How  Mexico Deals with Trump” of The New Yorker, the American biographer Jon Lee Anderson describes Krauze as “arguably the country’s [Mexico] most prominent public intellectual.”

Krauze hates Donald Trump. Of course, by now, even Trump’s biggest boosters—the Alt Right and talking heads like Ann Coulter and Tucker Carlson—have given up supporting Trump. But that’s because he has not followed up on his promises, particularly with regard to immigration: the wall, birthright citizenship, lowering legal immigration, deporting illegals, and not providing welfare benefits to immigrants. For Krauze, the hate is much deeper. His reasons for hating Trump are much more akin to the reasons so many American Jews hate Trump.  Put simply, Krauze hates Trump not for what he hasn’t done, but for what they see as a President Trump portending some kind of Hitlerian revolution in the West.

According to the Líderes Mexicanos magazine, Leo Zuckermann (another Mexican Jew) is one of the 300 leaders of Mexico. This April Zuckermann interviewed Krauze to talk about the latter’s 2018 book, El Pueblo Soy Yo, whose central theme is populism. I will translate from Spanish to English a passage from the television interview in which Krauze responds to a leading question by Zuckermann. Krauze says that, with the election of Trump, the United States

has degraded Western history. And the country is in a situation of political, historical and moral conflict of enormous [emphasis in Krauze’s voice] proportions and still of unknown prognosis. And there is, without a doubt, a battle between a prospective tyrant, who is Donald Trump, with very clear [emphasis in Krauze’s voice] fascist tendencies—… his racism, his nativism, his hatred, not to mention his personal pathology: megalomaniac, narcissistic in short (we would spend all night talking about this) that also dominates a Congress that wants to be dominated [!!!], against a judicial power that is defending itself, the press, the media, the radio and television channels.

… the polarization is terrible, and there are thirty-something percent of Americans who, whatever happens with Trump, would approve of him even if he killed people on Fifth Avenue, as he said [emphasis in Krauze’s voice]; nothing would happen.

Zuckermann agreed and referred to an intellectual he had admired so much, Samuel Huntington, especially for his book Political Order in Changing Societies (although not for his later books, such as Who Are We? The Challenges to America’s National Identity). Krauze responded:

I knew him [Huntington]. I even had a controversy with him, and this essay that I published in The New Republic is an essay against him [emphasis in Krauze’s voice] because he is Trump’s prophet. He is the man who says in 2003, in his latest book, “the United States is in danger.” But is the United States in danger? No. It is the White, Protestant United States—the United States that Huntington saw himself in the mirror—that is in danger. And why? Because of the Latin American and, in particular, the presence of Mexicans.

were losing their soul. That’s why I included [Huntington] there [in my book], along with a variety of my texts against Trump, including, of course, the text of my criticism of [then president] Peña Nieto for having invited Trump to Mexico: that was a historical error.

In other words, Krauze thinks that White Protestants in the U.S.  have some kind of moral obligation to accept as many Mexicans and others as want to go there—the same position held by his co-ethnics in the U.S.

Zuckermann intervened once again, saying that the Trump phenomenon was not only a populist phenomenon but also a phenomenon with “clear fascist overtones.” Krauze, editor-in-chief of the magazine Letras Libres, replied:

Do you remember that we made a cover of Letras Libres with Donald Trump and his Hitlerian mustache, and then they told us we were overstating our case? No: we didn’t. We fell short. Had this man, Trump, been born in the 1930s, he would surely have been part of the SS.

Zuckermann noted the fact that at that time there were many Americans who supported fascism and National Socialism. Krauze continued:

Well, but this man has had sympathy for the Ku Klux Klan. That is to say: we are talking about the true, hard right. And he is populist….

Keep in mind that Krauze is considered an intellectual on the right by Mexican intellectual standards! In the interview Zuckermann noted that Trump’s triumph was due to the “anachronism of the Electoral College” as Trump lost the popular vote. Krauze concluded:

Well, there it is, on the tightrope the United States, nothing less: our neighbor.

The quote speaks for itself. Suffice it to say that the same Trump paranoia that the U.S. mainstream media suffers north of the border happens also down here in Mexico.