A Spectre is haunting the Unz Review — the spectre of a highly ethnocentric Jewish commenter called Tyrion 2. He possesses all of Kevin MacDonald’s “background traits for Jewish activism,” from ethnocentrism and intelligence to aggressiveness and psychological intensity. With shameless disregard for facts and logic, he assails any criticism of Jews at the Unz Review, arguing aggressively and incessantly that no Jew anywhere has ever done or said anything harmful to non-Jewish interests.

Trap for a Tribalist

As you might expect, Tyrion 2 has been busy on re-prints of my own articles at the Unz Review. For example, he denies that the Jewish immigration minister Barbara Roche had any true responsibility for the massive increase in Third-World immigration under Tony Blair’s New Labour government. Here is his defence of Roche: “She was a junior minister in a government (naturally) dominated by Gentiles and only holding the relevant brief for 2 years. As to her motivations in upholding the party line of Gentiles Blair, Brown and Prescott, I don’t know (upholding the party line as a junior minister? keeping her job?).”

Anyone who reads my article “Roche Motel Revisited: The Comfort of an Atomized Society” will learn how far Tyrion 2’s assertions are from the truth. However, I thought that he wouldn’t bother attacking the re-print of my article “Liberals vs. Mother Nature” at the Unz Review. After all, the article is about India, Freddie Mercury and AIDS, not about the Jewish corruption of Western politics. I was wrong. Tyrion 2 seized on one small reference to Jews in the article – and entered a Roche trap:

Yes, both Jews and Parsis have been overachievers and yes, as you point out, Parsis were not as singled out for dislike as Jews [were] but Parsis lived in super diverse India and Jews lived in much more homogenous [sic] Europe. (Comment of 8th December 2018 on the re-print of “Liberals vs. Mother Nature” at the Unz Review)

Diversity is Good for Jews

Tyrion 2 is making the classic Jewish argument that racially and religiously mixed societies are safer for Jews than homogeneous ones. According to him, in “super diverse India” (in fact, not-so diverse Gujarat), Parsis didn’t stand out and so didn’t suffer persecution and expulsions as Jews did in “much more homogenous Europe.” And guess what? Tyrion 2 is thinking exactly like Barbara Roche:

Friday rush hour. Euston station [in London]. Who’s here? Who isn’t. A kaleidoscope of skin colours. The world in one terminus. Barbara Roche can see it over the rim of her cup of Americano coffee. “I love the diversity of London,” she tells me. “I just feel comfortable.” (Hideously Diverse Britain: The immigration ‘conspiracy’, The Guardian, 2nd March 2011)

Roche wasn’t acting on her own when she became immigration minister and opened Britain’s borders to Somalis and other low-IQ, high-criminality Third-Worlders. She was collaborating with other Jews to make Britain a more “comfortable” place for Jews. And since she left office, she has continued to campaign for open borders and for more anti-White bureaucracy:

Tony Blair should promote the benefits of legal immigration to Britain, and “not back off” from plans to create a super equalities commission, Barbara Roche, the former equalities minister, has urged. … The child of a Polish-Russian Ashkenazi father and a Sephardic Spanish-Portuguese mother, Ms Roche has reason for her feelings on immigration. “My being Jewish informs me totally, informs my politics. I understand the otherness of ethnic groups. The Americans are ahead of us on things like multiple identity. I’m Jewish but I’m also a Londoner; I’m English but also British.” (Roche urges Labour to promote the benefits of legal migration, The Independent, 24th June 2003) 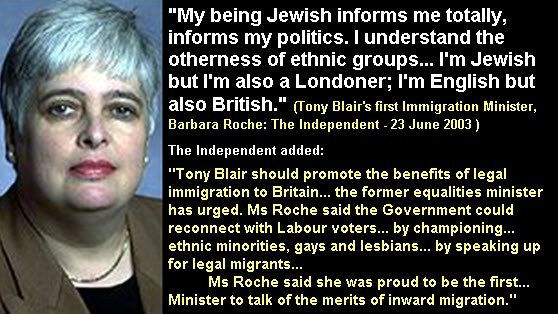 In fact, Barbara Roche is neither English nor British. How could she be, when “being Jewish informs [her] totally”? For her and for other powerful Jews in the West, a term like “British” or “French” or “American” is merely geographic. That’s why she was so eager to flood Britain with low-IQ Third-Worlders, re-shaping its demographics in a way that, while inflicting huge harm and expense on native British Whites, allowed her to “feel comfortable” while sipping “her cup of Americano coffee” at Euston station.

After all, if the flooding of Britain with Third-Worlders goes wrong for the Tribe, Roche and other Jews will simply do what Jews have done throughout history: leave the scene of their crimes. Nowadays they have a nation of their own waiting for them on the sunny shores of the Mediterranean. Israel has been shielded from diversity by “xenophobic” policies on immigration, asylum and citizenship for exactly the same reason as Britain, France and America have been flooded with diversity. Israel’s anti-diversity policies make Jews “feel comfortable” too.

You can understand this Jewish behaviour very easily. It’s governed by the eternal question: What’s good for Jews? (Whites, on the other hand, are addicted, perhaps terminally so, to principles, whatever the cost to Whites as a group.) For Barbara Roche, it was good for Jews to open Britain’s borders to the Third World. For Tyrion 2, it’s good for Jews to pretend that Barbara Roche was merely “upholding the party line of Gentiles Blair, Brown and Prescott.” In fact, New Labour was controlled by Jews, not by “Gentiles.” Tony Blair was a dim narcissist funded and controlled by Lord Levy, Gordon Brown was a psychologically disturbed homosexual funded and controlled by Ronald Cohen, and John Prescott was a lecherous non-entity who left office as a laughing-stock. New Labour’s underhanded and evil immigration policies had “MADE IN JUDAEA” stamped all over them.