Back in July of 2017, VDARE.com’s mainstay John Derbyshire noted that along with the rest of the white world, the small whitish Latin American nation of Chile is having its own troubles regarding our planet’s “rising tide of color.” Quoting from a recent piece put out by the Migration Policy Institute, he summarized:

International migration to the predominantly European-descent Chile has also grown racially diverse, as the origins have shifted. Chile received growing numbers of Peruvians and Bolivians starting in the 1990s, and Haitians, Colombians, and Venezuelans in the 2000s and 2010s, while the share of Argentines and Europeans has fallen. This diversification in general, and the influx of tens of thousands of African-descent Haitians in particular, has made immigration more visible as an issue and has provoked public backlash … [Amid Record Numbers of Arrivals, Chile Turns Rightward on Immigration, By Cristián Doña Reveco, January 17, 2018]

From the data available across a wide array of sources, I have put together the below table showing the number of foreign-born Chileans by country over the years—keep in mind that Chile’s total population today is estimated at around 17.5 million.

Chile is darkening. With the enormous increases in non-White immigration, as shown in the above tables, there can be no other outcome. To make matters worse, Chile’s national birthrate is nearly as bad as the notoriously infertile West: about 13 per 1,000 citizens. By comparison: Belgium, Denmark, and Norway are 11; Germany, Spain, and Greece are 9; Peru and Bangladesh are 19; Bolivia and Cambodia are 23. The limited data on group birthrates in Chile that is available suggests, as in Europe and the United States, that immigrants are producing offspring at a much higher rate than the natives, particularly Colombians, Chinese, and Venezuelans; while this could obviously be better (Spaniards, Argentines), we should also be grateful it is not worse (Haitians, Bolivians).

There are two distinct racial impacts this surge in migration has had on Chile: 1) The country is moving from its historical status of as a “castizo” (European and Amerindian mix, but majority European) nation to a “mestizo” (European and Amerindian mix, but majority Amerindian) one. 2) Chile, for the first time in its history, now has a significant Black minority—and one that is linguistically distinct to boot, as most of the Blacks now in Chile are from Haiti, which speaks Creole, a simplified version of French, not Spanish. [For a very detailed look at race in Chile, see my three part series on the matter published by American Renaissance: “A Racial Introduction to Chile, Part I,” August 31, 2018; “A Racial Introduction to Chile, Part II,” September 5, 2018; “A Racial Introduction to Chile, Part III,” September 7, 2018.]

Although a trend for the last three decades, the most recent burst of immigration, especially from Haiti, was largely aided and abetted by President Michelle Bachelet’s second time at the helm of the executive branch, from March of 2014 until March of 2018—Chile’s first and only Socialist President since the disastrous reign of Salvador Allende (1970 – 1973). Blessedly, her time in office has come to an end, and Presidents in Chile cannot run for re-election—though multiple non-consecutive terms are allowed. Moreover, the winner of Chile’s last Presidential election, held in December of 2017, is a sign of hope for both Chile and for Whites everywhere.

The victor was right-winger Sebastián Piñera, who had served as President once before from 2010 – 2014. In his most recent campaign, Mr. Piñera focused more than any other candidate on crime, law and order, and how recent waves of immigrants have been impacting the country. In debates and interviews, he regularly toted around a graph that neatly showed the issue of rising crime: 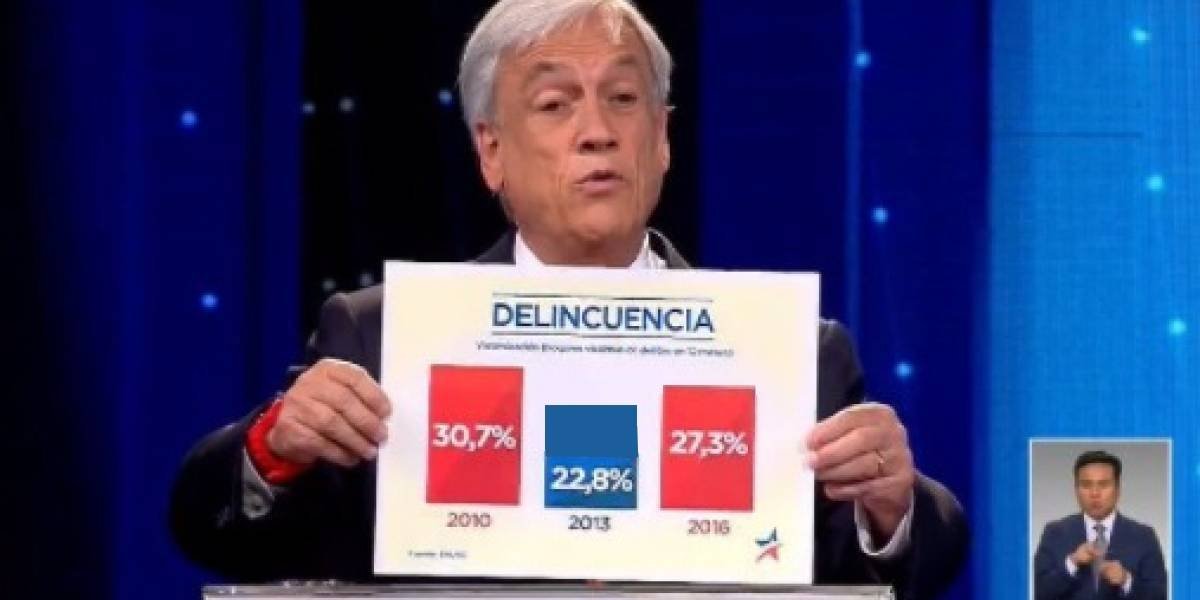 Mr. Piñera with his Nixonian bars

Many members of the media mocked Mr. Piñera’s graph, and attempted to deconstruct it throughout his campaign. 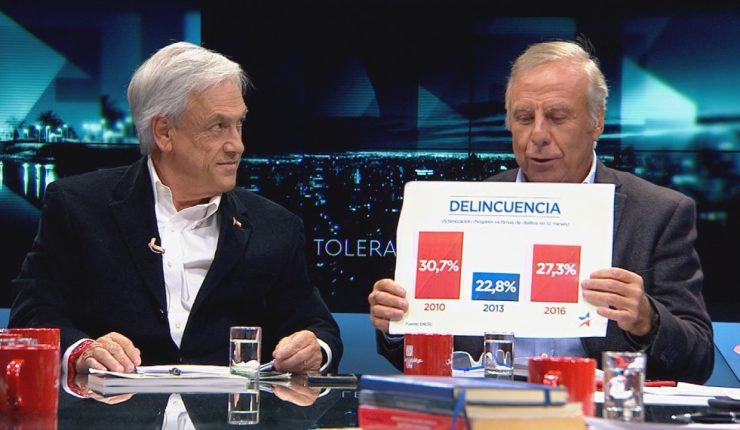 A TV personality chastises Mr. Piñera’s graph for having a baseline of 20 percent, and not zero, without saying as much.

Mr. Piñera promised to crack down not only on crime in general, but on illegal immigrants, drug traffickers, and human smugglers as well. Clearly aping President Trump, in 2016 Mr. Piñera said, “Chile should be open to receiving immigrants who contribute to our nation’s prosperity, but should absolutely close its borders to drug trafficking, crime, contraband, organized crime, and illegal immigration.” Doubling down, he went on to say, “Many of the criminal gangs in Chile today, such as those that specialize in identity theft, are made up of foreigners. This is a particularly grave situation for the areas [of Chile] where immigrants are a large percentage of the population.”

Chile’s presidential elections work as in France: if no candidate wins over 50 percent of the vote in the first round, there is a runoff vote with only the top two vote-getters. In the first round of 2017, there were two right-wing candidates and six from the left. With so many candidates, nobody won over 50 percent in the first round, but Mr. Piñera made it into the second round. In the second round, he won by nearly ten points, crushing his leftist opponent (a former mainstream journalist) Alejandro Guillier—and his victory clearly reflected the importance of immigration.

The regions most affected by immigrants are the massive capital city region of Santiago, its two neighboring regions, and the northern third of Chile—especially Antofagasta. Mr. Piñera carried all of these regions in the second round, and all but one by a large margin. He lost only the Whitest southern regions—which are all but untouched by immigration—and the absentee vote, which is dominated by leftists who fled Augusto Pinochet’s right-wing military regime (1973 – 1990) and never returned.

This all represents a marked change from the Sebastián Piñera of 2005–2014, during his first two terms as president. Back then, Mr. Piñera was much more like Mitt Romney, and much less like Donald Trump: his talking points were all of a center-right “economism” bent and little else. In the election of 2005/2006 he only narrowly managed to survive to the second round of voting, and then lost by an embarrassing eight points in the second round. He then won the presidency only very narrowly in 2009, by three points, largely because the Left’s candidate was the decidedly uninspiring and mediocre former President Eduardo Frei Ruiz-Tagle. Mr. Piñera’s first time in office was in many ways one large “lame duck” term from start to finish. He opposed the very popular social movement to make college more affordable, and his approval rating were regularly in the 20s and 30s—lower than Gen. Pinochet’s ever were. The Economist, which largely approved of his policies, even called him “inept” and noted that that opinion was, “not confined to the opposition.” I lived in Chile for part of Mr. Piñera’s first term, and it certainly felt like the entire country hated him. I myself always thought of him as something of a doofus, a Monopoly man without any sense of social grace or political tactics.

Yet only a few years later, after a scandal-ridden Leftist president and a wave of immigration and crime, Mr. Piñera returned to politics more as a Trumpian nationalist than a Romney-like Davos man. The results in his electoral fortunes and general popularity speak for themselves—and should serve as a lesson to the Right across the globe. Again, like President Trump, President Piñera shows a few signs of racial consciousness here and there. During his first term as President, he once said, on camera, to the father of a small blonde child, “Congratulations, you’ve done a great thing, you’re bettering the race.”

Mr. Piñera has been in office for less than a year, but he is already making good on his campaign’s tough talk. His administration has taken a number of different measures to make it harder for Haitians to come to—and then stay in—Chile. While I have no evidence for it, I also get the sense that there is someone in the new government who is effectively using backchannels and technicalities to slow immigration applications generally—much like what Stephen Miller is doing in the Trump White House. Regardless, President Piñera took office in April of 2018, and every month since then has seen more Haitians in Chile leave than arrive. [Argentina next best bet for Haitians as Chile tightens immigration controls, by Frances Jenner, Argentina Reports, September 4, 2018]

On top of that, Mr. Piñera is facilitating Venezuelan immigration. While Venezuelans may not be a good enthno-linguistic fit for the United States, they are a good fit for Chile. Importantly, though not as White as Chileans, they are much Whiter than most every other large source of migration to Chile in the last few years: Bolivia, Peru, and Colombia. Moreover, Venezuelan immigrants and their descendants will be sure to vote against Socialist and Communist candidates for decades to come—which will in turn limit future Leftist attempts to make Chile swarthier. There is also an element of fairness in allowing large numbers of Venezuelans to come: during Chile’s own chaotic period from 1970 until 1990, Venezuela took in an estimated 80,000 Chileans—including the famous novelist Isabel Allende. In fact, so many Chileans reached Venezuela that there is now a whole community of Venezuelan-Chileans there, including the actress Ana Karina Casanova.

So long as these trends stay firm for the rest of President Piñera’s term (until 2022), much of the cultural and racial damage done by the migratory patterns of the last five years could be undone. President Piñera, with Italy’s Matteo Salvini, Hungary’s Viktor Orban, and Poland’s Andrzej Duda, prove that the White world, whether in the Mediterranean, the East, or the Southern Cone, can punch back and will itself to survive. Let’s hope the West joins the trend.