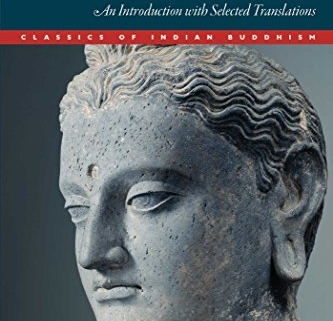 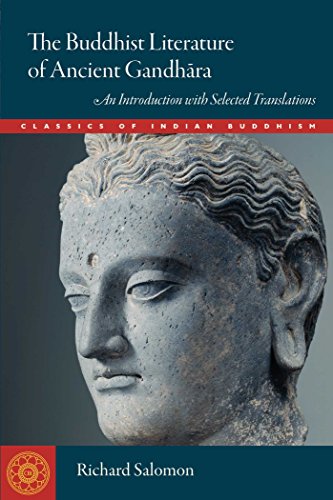 This is a fine book of translations of mysterious Gandharan Buddhist manuscripts. The context provided by Richard Salomon is excellent, providing a comprehensive overview of the little we know of ancient Buddhism and of the various sources: (enormous or fragmentary) Buddhist canons (Pali, Chinese, Tibetan, Sanskrit), archaeological sources (artifacts, inscriptions), and later legends and tales. Salomon emphasizes how little we know about ancient Buddhism from Gautama to Ashoka and indeed about ancient India in general.

Salomon’s long introductory chapters alone are worth the price of the book. I love it when a historian is able to draw a coherent picture from a great mass of wildly heterogeneous material (e.g. W. M. Sale on the Iliad, Brigitte Hamann on young Hitler, Fustel de Coulanges on the Indo-Europeans, David Engels on Roman decline).

Between the second century B.C. and the fourth century A.D., Gandhara, in what is today the rather hellish countries of Pakistan and Afghanistan, was a thriving Indic kingdom ruled by successive waves of Indo-European conquerors (Greeks, Scythians, Kushans . . .). As so often in multicultural empires, a period of syncretic flourishing was followed by total dissolution, with the disintegration of the state and of the ethnic elite with a stake in the commonwealth — quite comparable to what occurred in ancient Rome. 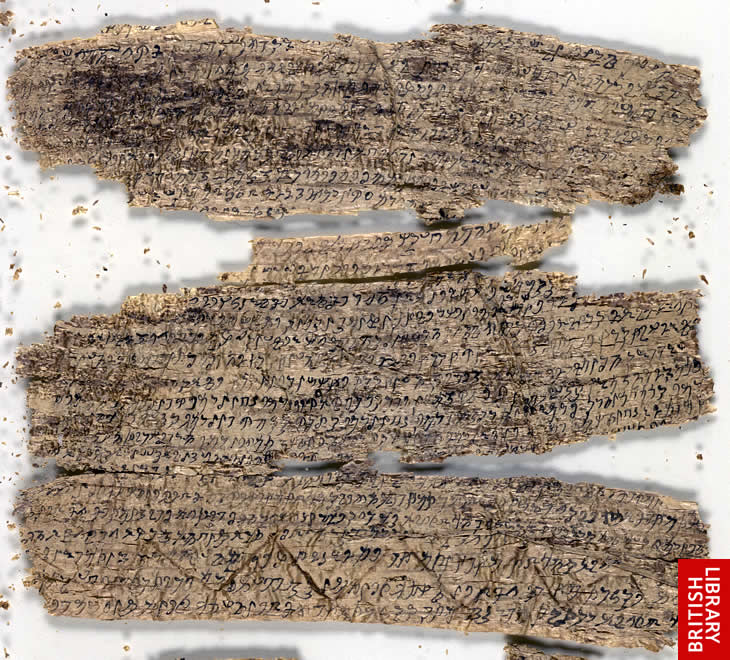 Salomon and his colleagues have been doing painstaking work over the past two decades collecting, reconstructing, and deciphering the Gandharan (overwhelmingly fragmentary) texts, of which there are about two-hundred. This book presents only a selection, the introductions and context being extremely detailed (often too much for laymen), typically longer than the translation. They have been able to draw a few significant insights. 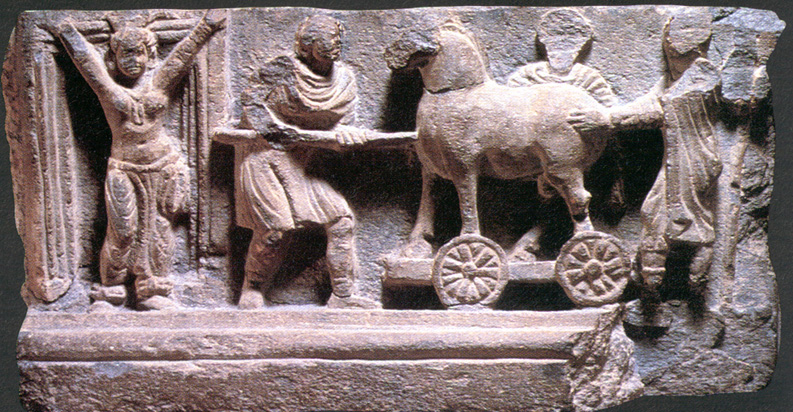 First, an incongruity: while the hauntingly beautiful statuary art of Gandhara was clearly created under Hellenic influence, there is no discernible trace of Hellenic thought in the surviving manuscripts. Gandharan Buddhism appears to have been similar to Buddhism in other parts of ancient India and the variations in the text appear to be more due to the vagaries of an oral culture being put to paper for the first time rather than to doctrinal differences. Gandharan Buddhism may have pioneered Mahayana Buddhism, the dominant school in East Asia. It also seems that the Chinese Buddhist canon was translated from Gandhari sources.

“Boddo”: Greco-Buddhist coin made by the Kushan king, Kanishka (circa 127-150 A.D.). Gandharan sovereigns would portray various gods on their coinage, apparently adapted to their local subjects. 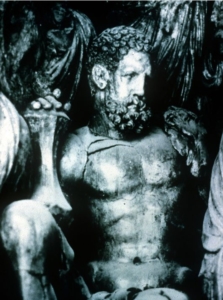 The Heracles of Hadda, Afghanistan, identified with Vajrapani, the Buddha’s protector.

We can say a few things about ancient Buddhism in general. It represented a rebellion against the brutally authoritarian, hierarchical customs and the reproductive values of ancient Hinduism, much as Greek philosophy and later Christianity challenged Homeric values. This marked a shift from the ancestral values of lordship and violence of the Indo-Europeans to “axial” values, favoring reciprocity and self-abnegation. In general, it seems to me that men gradually became exhausted with the “vitalist” values of the Vedas (Hindu scriptures), just as Homeric values gradually became exhausted due to the Malthusian pressures in settled, overpopulated areas. This led men to establish more conciliatory and de-escalatory values and ways of life, with less emphasis on classic Indo-European militaristic virtues that were so central to their conquests and their domination of conquered peoples.

Gautama Buddha’s message was universalist and open to all castes, spiritual merit being based on individual achievement, rather than one’s lineage. He challenged the spiritual monopoly held by the hereditary brahmin class. As Evola observed, it is intriguing that at the same time, ancient Buddhism also curiously asserted that buddhas can only be born of the brahmins or kshatriya (warrior) castes.

While ancient Buddhism demands respect for one’s parents and for society, it is a markedly dysgenic anti-familial and anti-natalist worldview, exhorting the best to become barren monks, dedicating themselves to contemplating reality rather than ensuring their posterity.[1] In this respect, the values of the Hindus’ Bhagavad Gita, emphasizing familial and political duty, reproduction, and a spirituality of detached action, strike me as much healthier for a people’s survival. Ancient Buddhism also affirms, uniquely among religions, not a denial but an indifference or even superiority to the gods.

Buddhist values — an adherence to truth, even the most unpalatable truths about the vanity of existence — in any healthy society must be counter-balanced by vitalist values. Japan, with its fusion of essentially pagan Shinto and various forms of Buddhism, did this best, culminating in Zen and the virtually unrivaled excellence of the samurai ethos.

Buddhism is highly diverse. Even the original sutras show Gautama as something of a naturalistic philosopher or a supernatural being. Buddhism later tended to become either a standard redemption faith (miracles, proliferation of supernatural savior deities, various postmortem rewards — a sure consolation for the peasants) or it turned into an uncompromising life-philosophy for an elite (most remarkably, Zen).

The Gandharan texts reflect most of these tendencies. There are many stories about the supernatural rewards (namely favorable rebirths) for those contributing to the Buddhist sangha (community). Most remarkably, the Perfection of Wisdom Sutra, the foundational Mahayana text, claims that those copying the sutra will get more merit from such action than by saving all the beings in as many worlds as there are “grains of sand in the river Ganges” (356). Now that’s an incentive for memetic reproduction if I ever saw one.

Buddhist scriptures, including the Gandharan ones, reflect the same kind of incomprehensible text, institutionally self-interested stories, supernatural claims, surprisingly bitter polemics about obscure points of doctrine, and outright gibberish that one also finds in those of other world religions. There are however certain elevated passages which may reflect the serene mental states actually achieved by ascetics.

[The Buddha] had achieved absolute self-control and calm . . . guarded, his senses suppressed, masterful, he was like a clear, clean calm lake. . . . Just as a blooming lotus [is not touched]  by water, so I am untouched by the world. Therefore, brahmin, I am a buddha. (114-15)

Say what you want about the ancient traditions, these were created through generations of men’s difficult efforts to thrive in a much more painful and brutal world than ours.

Ancient Buddhist meditative techniques involved restraining of the senses, will, and even thoughts; contemplation of one’s mortality, corpses, the disgusting aspects of one’s body and food, and communal monastic life. The Buddha asserts: “Sensation, perception, volitional formations, and consciousness are not yours; abandon them” (147). And he further exhorts (I remove the brackets indicating Salomon’s reconstruction using parallel texts):

Trade what ages for the ageless,
what burns for what cools,
the supreme calm,
the ultimate rest from exertion. . . .
Endowed with proper conduct and with vision,
rejoicing in calming within himself,
he delights in relying on the path,
wise and strongly concentrated. (315-16)

Buddhism may be genetically dangerous, but its memetic successes in spreading and sustaining itself as a world-religion are manifest. In this respect, Buddhism has useful advice for European identitarians and traditionalists in their own ideological struggle to reform their society’s values. The Buddhist sangha, or monastic community, was nothing if not an institution for the spreading of certain values. To build a strong movement capable of spreading its values, one must also have harmony within that movement:

The Gandharan Dharmapada, a set of verses ascribed to the Buddha summarizing the core values of ancient Buddhism, defines the ideal brahmin (or elite) as follows:

We should not take these words too literally. Numerous people no doubt found many of Gautama’s doctrines profoundly offensive. The point is that we ought not offend or hurt our fellows — who most often are our own people — gratuitously, only when necessary, only when it is for their own good. Sometimes you have to be cruel to be kind.

More generally, we would do well to heed the practices of past centuries, when people learned manners and were careful with their tongues, so as to reduce conflict among our peers.

With the fall of the Kushans in the fourth century, Gandharan Buddhism declined rapidly in the absence of royal patrons. Buddhist inscriptions disappear from around this period. Salomon writes:

[The Chinese pilgrim] Xuanzang’s travelogue shows Buddhism in Gandhara and the northwest to be alive, though not well, in the early seventh century. Over and over, he reports that monasteries are deserted or decrepit and that the remaining monks are few and often lazy and ignorant. (47)

Gandharan Buddhism was finally exterminated with the Muslim conquest of the region in the twelfth century. In its native India, Buddhism gradually and somewhat mysteriously died out, while Hinduism — ultra-conservative but emphatic about the familial duties of householders, including the brahmin priestly class — triumphed. The glories of Gandhara serve as a warning: a great empire may foster a magnificent culture, but without maintaining the people sustaining that empire and culture, nothing will remain, nothing but ruins and fragments amidst a more vicious humanity. 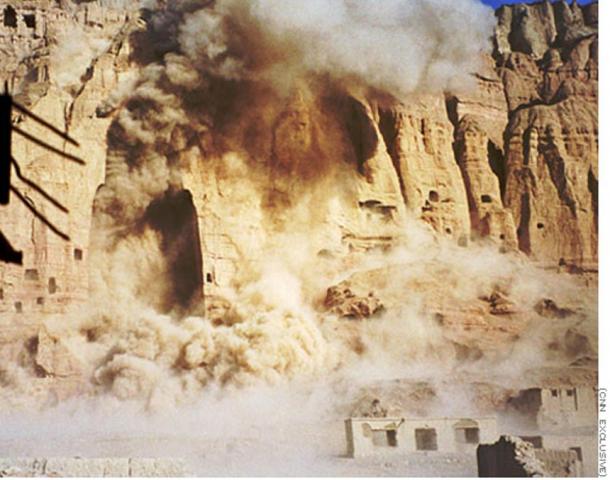 Destruction of one of the famous giant Bamiyan Buddha statues by the Taliban in 2001. 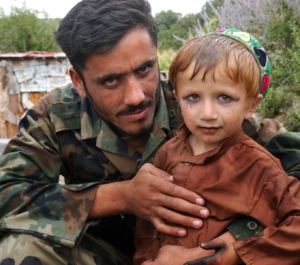 [1] It is true that Buddhist texts sometimes claim that a pious householder can be as valuable as a monk, e.g.: “He who, though adorned, practices the Dharma, who is controlled, calmed, restrained, who lives a pure life, shunning violence toward all beings — he is a brahman, he is an ascetic, he is a monk” (196). In general, however, the main theme of Buddhism is a devaluation of householders in comparison with monks.