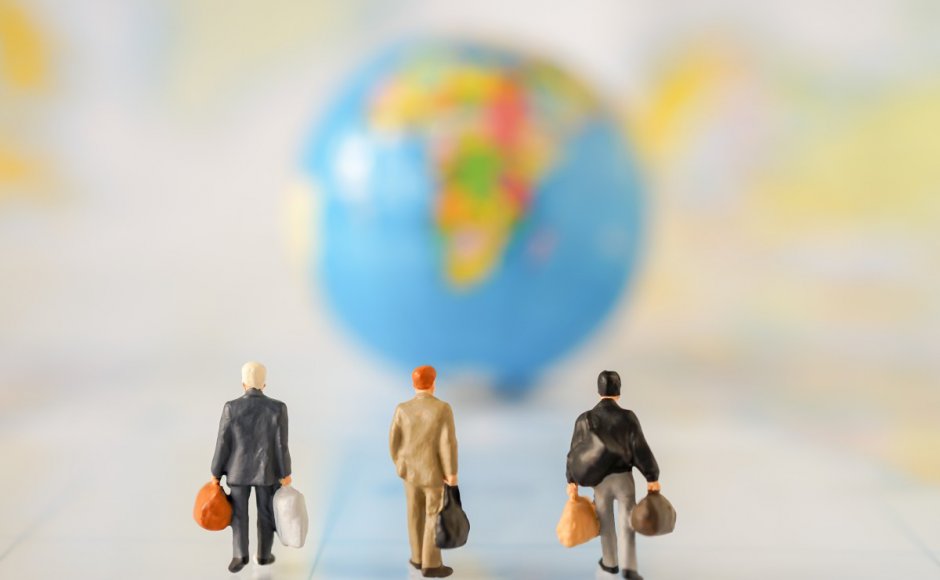 The modern era, beginning with Christopher Columbus’ discovery of the Americas, has been characterized by more and more interconnection and blurring between the world’s societies. This phenomenon has only grown in intensity over time with the rise of technologies such as mass transport and telecommunications, but also intellectual developments such as the rise of internationalist and anti-national ideologies. We may define globalism as the tendency, both conscious and unconscious, towards the destruction of distinct and autonomous nations and states in favor, allegedly, of a harmonious global society and polity. Globalism ignores the reality of racial differences and powerful nature of ethnic identity, two factors which are at the root of the inevitable tensions and conflicts to be found in all multiracial and multiethnic societies.

There are powerful material factors favoring the breakdown of national borders. There are efficiency gains in people being able to work and trade across borders. There is furthermore an understandable push by the billions of humans living in the miserable conditions of the Third World to enter our countries so as to enjoy a more comfortable and secure life. A nostalgic conservatism or reflexive inertia is then not enough to stop these pressures. Even Japan, still largely homogeneous, is starting to see significant numbers of phenotypically-distinct immigrants (especially Indians and Filipinos). An Indian man even recently won a local election in Tokyo. Rather, immigration must be opposed with a conscious and principled counter-force in the name of the economic and social well-being of the native— the preservation of their cultural and genetic identity and their sovereignty.

In the wake of the World War II, internationalists quite reasonably sought to limit conflict between states by embedding them in a web of international institutions (such as the United Nations, the World Trade Organization, and the European Union) and trade relations, as well as a common hegemonic liberal-democratic ideology. This, it was hoped, would create a community of interests making war between great nations unthinkable.

The postwar statesmen who established these international institutions, such as Dwight Eisenhower or Konrad Adenauer, did not have in mind the destruction of their respective nations. Rather, following the absolute carnage of ethnic warfare in Eastern Europe, these men generally saw the existence of distinctive, homogeneous nation-states as a factor for peace. The innumerable ethnic conflicts in the Third World, Yugoslavia, or the former Soviet Union, and the intractable tensions and conflicts in all multiracial societies, suggest their attitude was well-founded.

Whatever the merits of postwar internationalism, this ideology has since radicalized into an outright anti-national globalism. In the past, globalist ideology was always, somewhat paradoxically, mediated by national elites. Race-denying ideology, pro-minority legislation, the opening of economic borders, and, most fatefully, mass immigration and multiculturalism were all implemented, within Western nations, by particular national elites in a particular national cultural (notably linguistic) and political context.

Particular national elites, often with significant Jewish participation, most notably in the United States, France, and Great Britain, pioneered such approaches. The most striking examples of this might be Bill Clinton and Tony Blair who, at the high-point of globalist self-confidence in the 1990s, had psychologically already accepted and were promoting a world without any borders and without homogeneous (Western) nations. Alternatively, Western nations have also adopted globalism in imitation of their peers. In particular, Germany and most southern and eastern European countries have imported globalist practices in order to be accepted by other Western nations, whether for reasons to do with economics, geopolitics, or mere prestige and fashion.

In recent years however, there has been a novel development: the existence of globalist elites within particular nations who have stronger ties with each other than the nations they reside in. In the past, globalist elites were educated in their own national language, consumed their own media, and generally worked in their own country. This is no longer the case. There is a rapidly-growing ‘frequent-flier class’ of people who were educated abroad in English-speaking universities, whose work is international and often in English (multinational corporations, science and research, academia, international organizations . . .), whose online media are foreign (such as Netflix which has expanded to around 200 countries), and so on. This class of people is particularly identifiable in every Continental European nation, but psychologically analogous classes exist in Great Britain and the United States, particularly in the metropolitan areas. They form a nation within the nation.

The proverbial “small, rootless international clique” has been replaced by a rather large and growing class of deracinated individuals. In Continental Europe, this class is mostly made up of White gentiles, although I understand that in America Jews and Asians are much more prominent. This class is out of touch of the rhythm of the country they reside in. Their attitude towards provincial, patriotic Whites, who feel some sense of group identity, group interests, and homeland, is one of fear and loathing. They have absolutely no empathy for European nationalists trying to preserve their nation and race, the fruit of generations of struggle by our ancestors resulting in some 50,000 years of autonomous evolution.

This class is in fact extremely important. It is highly educated, has well-paid and prestigious jobs, and commands great influence in the media and political culture. The existence of this class is, in fact, why I am not particularly optimistic about the prospects for southern and eastern Europe, despite the rise of nationalism in these countries.

The fact is that southern and eastern European countries have comparatively low organizational capacity — that is to say, they are typified by poorly-paid and/or not many jobs, poor public services, low performance in science and tech, relatively limited international influence and power projection capabilities, etc. Thus, while I of course laud Hungary’s Viktor Orbán and Italy’s Matteo Salvini in their crushing of illegal immigration and their attempts to increase their national fertility rates, the fact that is the results (especially in the latter area) have been quite limited. Western Europe has comparatively high fertility rates and I am not sure these are entirely attributable to immigrants, but also to the fact that young parents receive much more economic and social support in these countries in general.

Furthermore, there is little indication these trends will be reversed. Southern and eastern Europe’s fertility rates are cripplingly low. The forces vives of southern and central Europe, the more dynamic and enterprising parts of the population, whether these be simple workers or highly-educated doctors and scientists, are bleeding out to Western Europe.

These deracinated, internationalized English-speakers form something a ‘global nation’ in and of themselves. While they are doomed to being a small and alienated population in their host countries, their numbers, interconnection, and collective power will grow. From Washington, London, New York, Silicon Valley, Berlin, Brussels, and Geneva, they may well consolidate into a genuine Transatlantic ruling class.

Interestingly, speaking English means these countries are most prone to being exposed to the most explicit racial ideas, namely those of the English-speaking world, notably with the work of Charles Murray, Philippe J. Rushton, Richard Lynn, Nicholas Wade, or Jared Taylor. It is certainly noteworthy that new Dutch national-populist party leader, Thierry Baudet, has met with Jared Taylor and embraced Europeans’ evolutionary inheritance, saying: “we are the product of three hundred thousand years of evolution. We survived the ice ages, we have slain mammoths.”

Furthermore, the government of Estonia includes the Conservative People’s Party (EKRE), which explicitly defends the interests of “indigenous Estonians.” The 41-year-old finance minister, Martin Helme, has in the past said he wishes to preserve “white Estonia” and that, concerning immigrants, “if he’s black, send him back” —  essentially echoing the sentiments of Winston Churchill who privately said his preferred election slogan would be: “Keep England White.” Meanwhile Ruuben Kaalep, head of EKRE’s youth wing and now a Member of Parliament, has open connections with the Alt-Right and has spoken at Alt-Right conferences. Estonians have a long history of ethnic consciousness stemming from an unfortunate history of conflict with Russian settlers. One wonders to what extent the English-speaking Alt-Right has influenced Estonian nationalists to channel this ethnocentric energy towards a productive pan-European racial consciousness which may preserve our breed of humanity.

There are plenty of negative trends. We should be under no illusions as to the gravity of the situation. The national-populist wave which has spread across the West is encouraging but, for now, completely insufficient to preserve our kind. The ‘global nation’ is here to stay and will for the most part work against us. However, we should also be on the lookout for opportunities. Sometimes, essentially negative historical trends can, in dialectical fashion, rebound in unexpected ways and yield positive results.