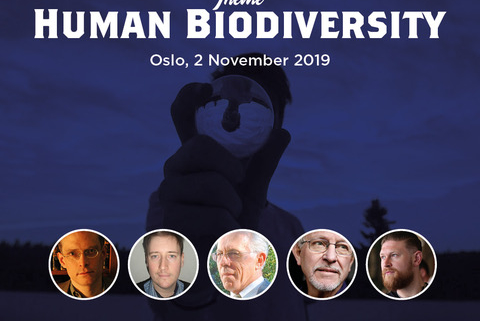 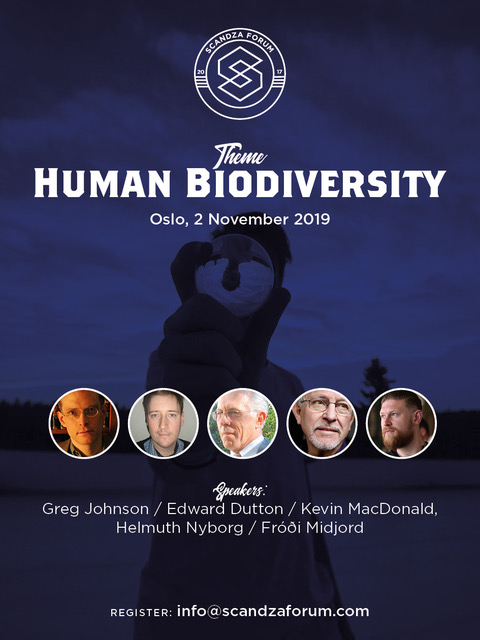 On 2 November 2019, the Scandza Forum returns to Oslo, Norway, with an impressive list of speakers:

Edward Dutton, PhD, is a British academic and writer based in northern in Finland. Editor-in-Chief on the scientific journal Mankind Quarterly, Dr Dutton is the author of numerous peer-reviewed articles and many scholarly books, most recently: At Our Wits’ End: Why We’re Becoming Less Intelligent and What It Means for the Future, Race Differences in Ethnocentrism, The Silent Rape Epidemic: How the Finns Were Groomed to Love Their Abusers, and Churchill’s Headmaster: The ‘Sadist’ Who Nearly Saved the British Empire. Dr Dutton burst onto the vlogging scene in January 2019 with his growing YouTube channel, The Jolly Heretic. This will be his first appearance on the Scandza Forum stage.

Kevin MacDonald, Professor Emeritus at CSU-Long Beach. He is the author of more than 100 scholarly papers and reviews, and he is the author of Social and Personality Development: An Evolutionary Synthesis (1988), A People That Shall Dwell Alone: Judaism as a Group Evolutionary Strategy (1994), Separation and Its Discontents: Toward an Evolutionary Theory of Anti-Semitism (1998), and The Culture of Critique: An Evolutionary Analysis of Jewish Involvement in Twentieth-Century Intellectual and Political Movements (1998). He has also edited three books, Sociobiological Perspectives on Human Development (1988), Parent-Child Play: Descriptions and Implications (1994), and Evolutionary Perspectives on Human Development (2004). Cultural Insurrections, a collection of essays, appeared in 2008. In April 2015, professor MacDonald spoke in Stockholm on the psychological mechanisms of pathological altruism, at an event organized by Fróði Midjord and Logik Förlag, and in the spring of 2017 he gave a speech at the first ever Scandza Forum.

Helmuth Nyborg, Professor Emeritus of psychology at the University of Aarhus. Among other things, professor Nyborg has done research on the genetic heredity of intelligence and behaviour and he has written on “collective fraud” regarding the nature/nurture debate in academia. One of his debate articles in Danish mainstream media, from 2016, is titled “Danishness – culture or biology?”. Professor Nyborg has previously spoken at AmRen and he appeared on an interview with Stephan Molyneux on the topic “Race, Genetics, and Intelligence.” This will be his second appearance at the Scandza Forum.

Greg Johnson, PhD in philosophy, founder and editor of Counter-Currents/North American New Right, former editor of The Occidental Quarterly, and author of numerous articles as well as ten books, including The White Nationalist Manifesto (San Francisco: Counter-Currents, 2018). Dr. Johnson is one of the leading intellectuals of  White Nationalism and the Alternative Right, and he has spoken at every Scandza Forum.

Our theme for this event is Human Biodiversity, the suggestion that the diversity found among and between human individuals and populations has a significant basis in biology. Although the theory of evolution is well established throughout the West, it has for decades been taboo to apply evolutionary/biological explanations to human behaviour, and especially to differences between human populations and races. Popular culture and the political mainstream today has implicitly assumed the “blank slate” theory as an axiom for what can be discussed in polite society.

One famous example of this is James Watson, who won the Nobel Prize in Medicine 1962 for groundbreaking research on DNA. In 2007 he told a newspaper that he was “inherently gloomy about the prospect of Africa” because “all our social policies are based on the fact that their intelligence is the same as ours – whereas all the testing says not really,” which would be an uncontroversial statement for anyone who is actually familiar with the research on the subject. However, the statement ignited a mass media witch hunt which resulted in Watson selling his gold medal in 2014, because he had been ostracised from the scientific community.

During this event, we will break those taboos, speak freely on the “Nature vs. Nurture” debate and discuss human diversity from an evolutionary perspective.

If you want to know more about our events, please watch any of my several appearances on podcasts and live streams where I have been interviewed about the Scandza Forum, including:

If you want to attend, please send us an email for information on how to proceed with the registration: info@scandzaforum.com

Since we have two conferences coming up, remember to let us know which one you want to attend (you are also welcome to register for both events, of course).

Because we care about your safety, we have a vetting procedure to make sure that everyone attends with honest intentions. There are three ways you can get admission to the event, so remember to include the necessary information when you contact us:

This will be an unforgettable event – so make sure to register now!

Finally, I want to thank our supporters and donors – you know who you are. It is with their help that the previous Scandza Forums have been made possible, and that we now are able to move forward!

I am looking forward to seeing you all in Oslo on 2 November.