Once Upon a Time in Hollywood is not an homage to the Hollywood of the ‘60s but rather a paean to masculinity using Hollywood as a foil. This fairy tale was created not to praise Hollywood but to censure it.

What drives the movie and constitutes its backbone is the contrast and interplay between two conceptions of what it is to be manly, the one embodied by the mostly Western genre actor Rick (Leonardo DiCaprio) and the other by his stunt man Cliff (Brad Pitt). Rick has been playacting killers and tough guys most of his career. As such he is gritty and fearless and highly skilled in the manly art of self-defense. But, of course, because he is an actor, it is all just an act. The real Rick, the Rick not in front of the cameras, is insecure, and given to weeping, self-loathing and childishness. On the studio grounds he is at one point lectured on the responsibilities of the actor by an eight-year-old girl actor. Later, after doing a scene together, it is the little girl who feels the need to encourage this man much her senior by whispering in his ear, “That was the best acting I’ve ever seen.”

Cliff, by contrast, is fundamentally NOT an actor. He is in movies as a stuntman but his role isn’t to act. It is to fall off roofs and horses and generally help Rick “carry the load,” as Cliff modestly sums up his job the first time we see him. Indeed, Cliff’s modesty, which is fundamentally a self-assurance and far removed from humility, is one of the prominent characteristics that go into defining what it is for Cliff to be manly. The others we will shortly see illustrated: he is confident and exceedingly capable, as exemplified in his genuine ability to defend himself against real threats; he has a pronounced sense of responsibility for his fellow man, even those only distantly related to him, as when he persists at the risk of his own life to enquire about the well being of George Spann; and he is an adult, which is to say mature, not one to give in to the sexual enticements of a girl child. These are some of the jewels in Cliff’s manly crown. 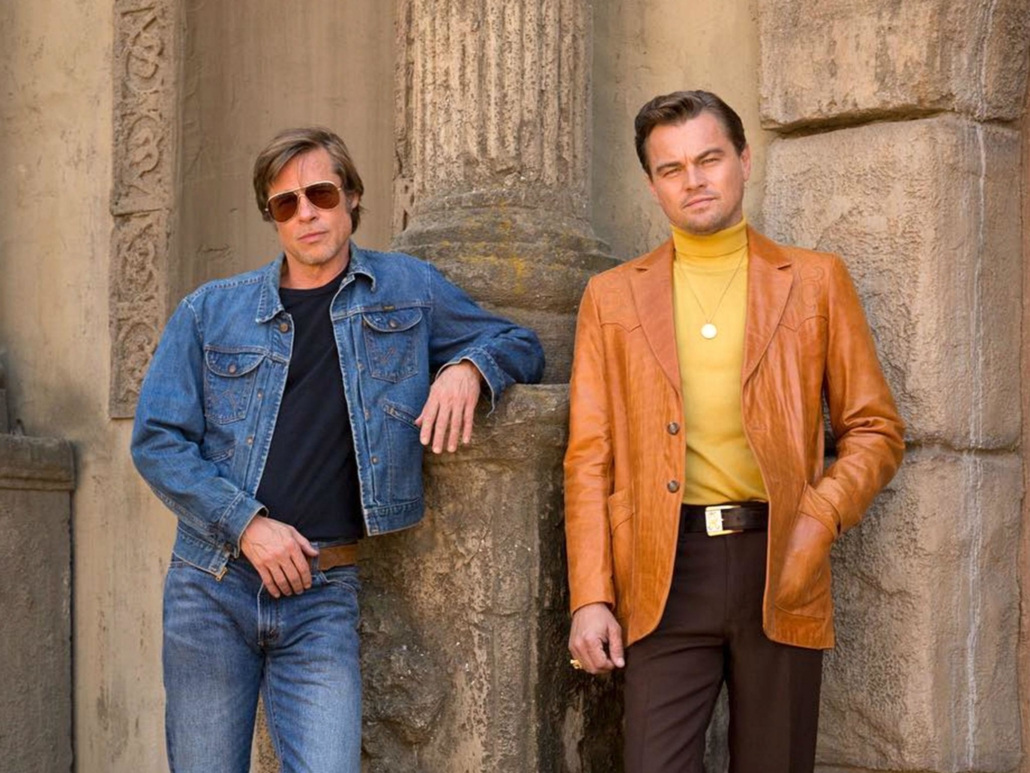 Brad Pitt and Leonardo DeCaprio portray two contrasting types of masculinity in Once Upon a Time in Hollywood.

And there is another, which is finely demonstrated in Cliff’s confrontation with Bruce Lee. I refer not in the physical fight itself, which Cliff knew he could win, but to his registering the only vocal objection to Lee’s claim that he could whoop Muhammed Ali. All of the several other listening to Lee’s boast — that this 137-pounder could beat the heavyweight boxer — listen in awe and stand transfixed in silence at this display of arrogance and pomposity. Not Cliff. He laughs. A fitting response to be sure, but a response not capable of being made by just anyone in such circumstances.

Finally, Cliff is a stoic. What slings and arrows fortune sends his way, he handles with aplomb, remaining essentially unaffected by them and not at all reduced in the respect he pays to himself. He doesn’t act as if he had been lowered when he is asked to chauffer Rick around or is commanded to fix a TV antenna. And so far is he from complaining about his lot, so little does this man tolerate such whining, that he is prepared to deprive even his beloved dog of supper if that creature whines a second time.  Whining, not bearing without complaint that which fortune brings, is a cardinal sin.

In contradistinction to Rick, who is like Eddie Adams in Boogie Nights in rousing himself to action by lecturing his image in a mirror, Cliff is supremely unselfconscious and always inner-directed. By instinct he knows what he is about and how he should act. This is a character who does not think about how he should act, reflect on what is right and what is wrong, hesitate in the face of a demand for action. He is and he acts from within himself. Which is to say, he is authentic. No rehearsal needed for this kind of “actor.”

It is clear which idea of manliness Tarantino lauds and which he mocks. But note that he mocks not so much Rick the actor as those cowboy roles that Rick played on TV and in the movies. He mocks the savage masculinity of the Rick character who can say, in response to a recollection of many people dying in an earlier gunfight, “Yeah, but we had a lot of fun.”  Of course, Tarantino mocks Rick, too, suggesting that playing such childish roles stunts the actor. And we are meant to laugh at the disparity between Rick’s manliness and that of the fictional characters he portrays.

It is fitting that Cliff would be rewarded only with a bare subsistence. His circumstances likely have not fallen. More likely they have never risen above lodging in a trailer and feeding on mac and cheese, while Rick has laddered up to one mansion short of Roman Polansky’s. So skewed were Hollywood’s values in the ‘60s, and so skewed were those of TV viewers.

The picture I have drawn of Cliff’s manliness is considerably larger and more detailed than that of Rick for the good reason that the kind of manliness embodied in Cliff is itself much more generous and expansive. A mature human is far more complicated and interesting than a toddler, and infinitely more praiseworthy.

Tarantino would thus agree with the hitchhiking hippy girl when she tells Rick that his stuntman work is far more real than that of actors, who are essentially phony. Hollywood TV serials of the ‘60s were peopled with Ricks — Matt Dillon, Man from Uncle, Batman — cosseted play actors pretending to kill those who pretended to want to do them harm. (Matt Helm movies escapes this criticism, as they didn’t take themselves seriously. Helm movies underline their distance from reality and present themselves as an amusement and not a model for anything but fun. That fun was good, clean and wholesome. As was Sharon Tate, who had a role in one of those Helm movies.)

But to what extent would he agree with another Manson girl, a killer manqué, who contends that Hollywood’s TV Westerns taught America how to kill, but that was only play acting and what the Manson clan is about to do — kill those same actors and directors responsible for those Westerns — is far more genuine and true? Indeed, the killing of Sharon Tate and companions was anything but phony?

Obviously, Tarantino was repulsed by the killings and would hardly endorse the irrational thinking that lay behind it. But those killings were real and those Manson killers were authentic in their actions, and that violence endlessly portrayed in ‘60s TV and movie Westerns (phony violence) may very well have blunted those killers’ moral sensibilities — to some extent.

The portrayal of Jews in the film is hardly irrelevant given Tarantino’s close relationship with one of Hollywood’s most influential producers, the notorious Harvey Weinstein. Tarantino has said he knew of some of Weinstein’s offenses and regretted he did not assist his victims and blow he whistle on his predations. The two Jewish directors we see portrayed in the film, Wannamaker and Schwarz, are glib, manipulative wizards who are clearly adept at pulling the strings that direct the lives of Hollywood hopefuls. The third Jew depicted, Roman Polanski, is seen by Rick as a grand star in the Hollywood firmament, but for many of those watching this movie he is foremost a child rapist and as such stands as a foil to Rick who, far from raping a girl child who fell into his lap, manfully rebuffs her advances. Weinstein is paired with Manson here.

Is Tarantino blowing the whistle now? Blowing it on those powerful movie men who chew on and disgorge naifs from the Midwest? Blowing the whistle on himself and his movies, including, height of ironies, Once Upon a Time in … Hollywood?

Daniel N. Davidson worked as a reporter and editor for a variety of newspapers and as a text editor for the Jerome Levy Economics Institute. He lives in Milwaukee.