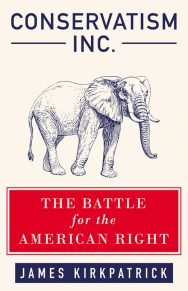 It is a political truism that the best way to control the opposition is to lead it oneself, and today’s globalist, anti-white left has succeeded better than perhaps anyone else in history at implementing such a strategy. The rising generation of young white men are subject to a ceaseless campaign of psychological warfare by the dominant elite: taught that their ancestors were monsters and that they themselves are the great, supposedly all-powerful enemies of the rest of oppressed humanity. But when they look around for an alternative to such hostility, they encounter a “conservative” opposition happily chirping about “the record number of new businesses started by black women” and holding “Young Latino Leadership Summits,” while hypocritically telling Whites (and Whites alone) that “ethnonationalism has NO place in the conservative movement.” We will never defeat our declared enemies before we have displaced this sham opposition.

James Kirkpatrick, columnist for VDare.com and The Social Contract Quarterly, spent years within a conservative movement that now has no place for him, but readers of his new book Conservatism Inc. will be the beneficiaries of their folly. No one knows that gutless, cowardly gang of careerists better than he does. As he writes:

Conservatism Inc. always has to appeal to nationalism and populism to win elections. However, they didn’t actually mean it—it was simply a way to get the rubes to vote Republican. Once safely in office, the likes of Eric Cantor and Paul Ryan get back to cutting taxes for the rich, outsourcing jobs, opening the borders and getting mired in pointless foreign wars.

Kirkpatrick correctly observes that the leadership of every normal movement in history has been more dedicated to achieving its  goals than the rank and file; conservatives alone are “always enthusiastic about denouncing the most stalwart and energetic activists on their own side.” The only possible explanation is that they are not genuinely interested in hardball politics:

If politics can be defined as the pursuit of power, movement conservatives aren’t even really involved in politics, since they are trying to persuade the world with their universal “principles,” not trying to acquire power to defeat enemies…. The conservative movement exists to consolidate and legitimize the leftist victories of the past.

Yet, although they make “no serious effort to defeat the Left, movement conservatives have a highly developed political sense when it comes to climbing the career ladder within Conservatism Inc.” The periodic purges of all who directly challenge key leftist assumptions are conservatism’s “preferred method for removing competitors within their own organizations or securing a spot as the token ‘conservative’ on a liberal media network.” This journalistic cartel is in reality “a parasite that …  exploits the grievances and frustrations of a dying people to fuel policies that furthers their dispossession. For the nation to live, the Beltway Right must be radically reformed or, more likely, broken.”

The rising generation of Americans is faced with “increasingly overt anti-white sentiment and the cascading catastrophes engendered by mass Third World immigration.” The nation which should have been their birthright has been reduced, in Obama’s approving words, to “a hodgepodge of folks.” These young Americans have no stake in defending a “limited government” that ceased to exist a long time ago, or a “free market” made up of gargantuan monopolies that deplatform the few spokesmen who explicitly support the interests of White America. They know they can have their lives destroyed in an instant for an overheard remark. Under such circumstances, they must focus not on universal principles, however admirable in themselves, but on winning an existential struggle against the determined enemies who have unleashed anti-White racial hatred and demographic warfare against them.

And to do this, they must mobilize their natural base—the White working class abandoned by the Left. As automation lowers the supply of jobs for which such Whites qualify and immigrants increase competition for those that remain, these people desperately need a leadership able to channel their righteous anger into an effective political program that genuinely advances their interests both as a class and as a race. As Kirkpatrick says, “the existential issue of the next century is identity, the key challenge is resisting the Death of the West, and the template to follow is the Donald Trump campaign of 2016, which proved that National Conservatism can win.”

Note that it is Trump’s campaign, not the man himself, to which Kirkpatrick directs our attention. In office, Trump has flinched from implementing the policies that seemed implied by his campaign rhetoric. Some of his failures are due to his enemies, but he has only himself to blame for failing to tax remittances and calling for increased legal immigration. Kirkpatrick is probably correct that Trump will prove a transitional figure, while his electoral strategy will provide the inspiration for more consistent nationalists in the years ahead.

Most of Conservatism Inc. consists of carefully chosen columns written between 2013 and 2018. The pieces are short and punchy, ideal especially for younger readers getting up to speed on America’s current situation and the nationalist response. This material can be difficult to summarize, but highlights include his account of

As Kirkpatrick wrote four years ago:

Conservatism may prefer running out the clock on Anglo-America in order to squeeze out consultants’ fees and board directorships for a few more election cycles. In that case, the dreaded specter of ‘white nationalism’ will move from the margins to the mainstream as the only Alternative to a permanent Leftist (and anti-white) regime. And the Beltway Right will have only itself to blame.