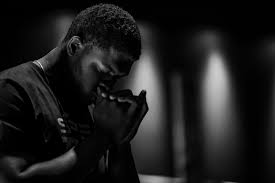 Well judging by the media and political reaction this was the crime of the century. The headlines said it all, even those from “conservative” sites like Drudge which lead for days with “Brutal Murder Shocks The Nation”. (The presumption of innocence  has become another casualty of the new woke culture).  Even Donald Trump got his spoke in, declaring it to be ‘very,very sad’. We’re talking here about Ahmaud Arbery (left at prayer*) who, if we’re to believe media reports (chuckle) was simply innocently jogging when a pair of rednecks (Gregory McMichael and his son Travis) chased after him in a car before ventilating him with a shotgun. That the authorities took months to bring charges brought the ensuing squeals of outrage to a fever pitch.

But there was a reason for that delay. Mr Arbery’s mother, Wanda Cooper Jones, said police told her her son had been involved in a burglary before the incident, but the family say they do not believe the keen jogger had committed a crime and he was unarmed. A number of calls were made to the emergency services around the time of the confrontation, CBS reports. In one 911 call, a neighbour said a black man was seen at a home under construction in the area. When asked what the man was doing now, the caller said “running down the street”.

Now that’s a bit different, isn’t it? If you see a black man running in a White neighbourhood any normal person will assume that he’s fleeing the scene of  crime. And a number of crimes had just been committed. Any normal person would also assume that black escapee to be armed. In this case he wasn’t armed. But the McMichaels weren’t to know that. Now look at the video and you’ll fully understand why charges had not been brought. Arbery was not ‘gunned down’. He foolishly tried to take the gun from McMichael and during the ensuing struggle a shot was discharged, fatally wounding the thug.
And yes.he was a thug. He had a criminal record. But you know what? The links I looked up are no longer available. Isn’t that amazing? Well no, of course it isn’t. Aubrey will join the long list of future brain surgeons like Freddy Grey and Michael Browne murdered by racist Whites. In fact these thugs were more likely to end up murdering a brain surgeon than becoming one. We can duly expect the media to fan the flames and precipitate another bout of rioting and destruction. You know, ‘give them space to destroy’.
The proverbial visitor from Mars would be scratching his pointed head observing all of this. Wondering why the dominant race prostrates itself before a violent and parasitical minority. And why the dozens of black-on-black murders that take place every hot weekend go unreported while the nation descends into paroxysms of self-flagellation when a black gets killed by a White in a struggle over a gun.