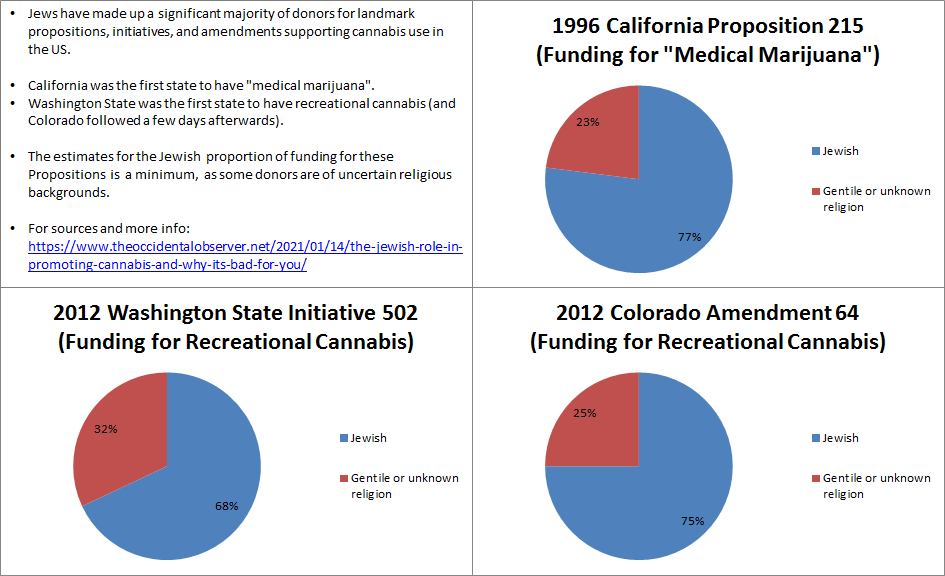 That Jews should be involved in the promotion of cannabis should come as a surprise to no educated person. After all, in centuries past the Sassoon family (“the Rothschilds of the East”) grew wealthy plying opium on the Chinese, resulting in the Opium Wars. In more recent years, the Sackler family turned enormous profits pushing the opiate Oxycontin (which the Sacklers knew to be addictive) upon American Whites. While many articles have been written in the dissident right on these topics, the normalisation of cannabis has happened with seemingly less attention. Mentions of cannabis are typically made in passing, perhaps due to the association of anti-cannabis sentiments with mainstream conservatism.

The Jewish role in the modern promotion of cannabis

This remark (a tape-recorded conversation was released after Nixon’s presidency) reveals the high level of Jewish influence in the 1970s push for legalisation, and while there were some gentiles involved, it’s understandable that Nixon might miss the occasional gentile within the Semitic sea of activists. One notable Jewish influence from the 1970s was Harvard professor Lester Grinspoon[1], who released the highly influential book Marihuana Reconsidered (1971), and who, in 1978, said “I think ultimately cocaine is less harmful than alcohol and tobacco” while advocating for the liberalisation of laws regarding cocaine.

The 1970s push for reform ultimately failed as cannabis advocacy increasingly became associated with cocaine use — a bridge too far for the public. The connection deepened when the prominent cannabis organisation NORML (The National Organization for the Reform of Marijuana Laws)[2] became embroiled in a PR nightmare after Peter Bourne (Carter’s drug policy adviser) allegedly used cocaine at a NORML party om 1977[3].

After the failure of the 1970s push for legalisation, a new incrementalist approach was taken. “Medical marijuana” was pushed as a concept. It provided a convenient slippery slope: its advocates were not promoting cannabis for recreational use—they were promoting it only for medical use for people with chronic pain — “You want to help people with chronic pain, right?” But then, as cannabis became viewed as a medicinal product, people began to view it less as a harmful drug (“Can it really be so harmful if it’s medicine?”), thus paving the way for later legalisation.

Two new cannabis advocacy institutions were created. The Marijuana Policy Project (MPP) was created in 1995 by Rob Kampia and Mike Kirshner[4], and has financial backing from the insurance billionaire Peter Benjamin Lewis[5]. The Drug Policy Alliance (formerly the Drug Policy Foundation) was created in the year 1992 by Ethan Nadelmann and has financial backing from the financial billionaire George Soros.

California Proposition 215 was put forward to legalise “medical marijuana” in 1996, and Jewish sources provided 77% of the funds supporting the proposition[6]. Of the $1.5 million total, the following came from Jewish sources: $550,000 from Soros, $500,000 from Peter Lewis, and $100,000 from George Zimmer[7]. The proposition passed, and subsequently, copying California, other states began to legalise “medical marijuana.”

Within 16 years of California’s Prop 215, Washington State would be the first state to legalise the recreational use of cannabis through Initiative 502 in December 2012, followed by Colorado with Amendment 64 a few days later.

In Washington at least 68% of the funds for Initiative 502 came from Jewish sources, and only 35% of the money came from sources within Washington [8]. Of the $6.17 million total, the following came from Jewish sources: $2.04 million from Peter Lewis himself; $1.69 million from Soros’ Drug Policy Action; $435,000 from various ACLU organisations; $75,000 from Emanuel Bronner[9]. Rick Steves, a Christian, donated $450,000. There were several individuals who donated over $100,000 who were of an unknown religious background (Thomas Swift, James Swift, Harvey Philip, and Harriet Bullitt).

However, some legalisation attempts backed by Jews have failed. The 2010 California Proposition 19 to legalise recreational cannabis, to which Soros donated $1 million, was rejected by voters[11]. However, if enough money is thrown at propositions, one will get through in the end. In 2014, Nadelmann estimated that Soros was giving roughly $5 million a year to the Drug Policy Alliance and its affiliates [12], and the total amount donated by Soros to drug-related initiatives is reported to be as high as $100 million[13].

Other facts about cannabis and why it’s bad for you

Israeli scientist Raphael Mechoulam was the first to isolate and achieve the total synthesis of THC, the chemical which causes the “high” when one consumes cannabis. On the subject of THC: prior to the 1990s, cannabis had less than 2% THC content, but by 2017 popular strains of cannabis ranged from 17% to 28% — i.e., least ~10 times more potent nowadays [14]. This is why people from the Baby Boomer generation often reported not feeling an effect “that one time” they tried cannabis. The shift in potency in cannabis is roughly equivalent to shifting from beer (~4% alcohol) to brandy (~40% alcohol, or 10 times more potent) — a single blunt of current cannabis is to a blunt of older cannabis as a pint of brandy is to a pint of beer. For this reason, much of the older research is out of date, or at least will underestimate the effects of cannabis use.

CBD is another chemical found in cannabis. It is thought to have some potential health benefits (for seizures, such as those caused by epilepsy, and possibly some other conditions[15]. However, as cannabis has been selected for greater proportions of THC, CBD content has decreased. The strains of cannabis with high THC tend to have low CBD[14].

Cannabis advocates will often make arguments that “cannabis has only been proven to correlate with schizophrenia and psychosis, not cause them.” It is worthwhile to point out that in the 1950s and 60s, tobacco had not been proven to cause lung cancer — they were merely shown to be correlated. The lack of causation was an argument used by big tobacco companies. Luckily, people back then were less sophisticated about statistics, and thus restrictions came into place on tobacco and so many people avoided lung cancer and death.

Another argument of cannabis advocates boils down to “most people who smoke cannabis don’t develop schizophrenia or psychosis, and so you shouldn’t say that cannabis causes psychosis.” This can be countered by observing that everyone knows and agrees with the statement “smoking tobacco causes lung cancer.” but a surprisingly low number of smokers ever develop lung cancer (15% for current smokers vs 7% for former smokers and 2% for those who never smoked)[16].

The effects of cannabis are not limited to psychosis. Other effects may include worsened: memory, anxiety, depression, intelligence (especially for children or adolescents), apathy, suicidal ideation, lung health, and more [14]. People with psychosis are also significantly more likely than average to commit violent crime[17], and thus cannabis might indirectly cause violence.

It has been shown that Jews and their organisations have provided the majority of funding for all recent landmark propositions, initiatives, and amendments supporting cannabis use in the US. Jews are unlikely to spend millions of their own money to improve the state of a gentile population — certainly the Jewish promotion of liberalism, pornography, feminism, anti-racism, etc. has not benefited gentile society.

For the foreseeable future, cannabis use will decrease the quality of society generally. As people become apathetic and stupefied by cannabis, they will be less likely to join the dissident right and more likely to join, for example, antifa. On the other hand, as the general population degenerates through cannabis consumption, our (relatively) energetic and morally upright people will start to gain a comparative advantage over the apathetic, depressed drug users.

[1] “For the last five decades, Dr. Grinspoon was the intellectual leader of the marijuana legalization movement.” https://norml.org/blog/2020/06/25/norml-remembers-dr-lester-grinspoon/ also see https://www.thecrimson.com/article/1978/2/17/professor-grinspoon-will-seek-liberalization-of/

[2] NORML was founded in the 1970s by a gentile named Keith Stroup, but had early backing from the NY Senator Jacob Javits, who sat on its board of directors in the 70s. It had a high degree of Jewish involvement and exists to this day.

[4] The MPP was founded after a disagreement between the founders and the then executive director of NORML, Richard Cowan (who, interestingly, was a founding member of Young Americans for Freedom, a Conservative student group launched in 1960 by William F. Buckley https://norml.org/richard-cowan/). Rob Kampia is likely Jewish https://twitter.com/RobKampia/status/976119252653694977 https://www.medicaljane.com/directory/professional/rob-kampia/, but there is little information about Chuck Thomas available on the internet.

[7] A Jewish businessman who predominantly worked in the clothing industry. Net worth around $200 million. https://www.celebritynetworth.com/richest-businessmen/ceos/george-zimmer-net-worth/

[12] Sorvino, C. (2014) An Inside Look At The Biggest Drug Reformer In The Country: George Soros. Forbes. 2 October https://www.forbes.com/sites/chloesorvino/2014/10/02/an-inside-look-at-the-biggest-drug-reformer-in-the-country-george-soros/

[13] Berenson, A. (2019) Tell Your Children: The Truth About Marijuana, Mental Illness and Violence. Free Press. Chapter 5