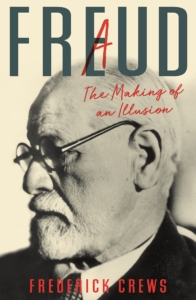 Two guest reviewers offer us intriguingly diverse perspectives on a biography of the great Sigmund Freud. Dr. D’Bea’Qwarr insisted on not capitalizing ‘white’.

Freud: The Making of an Illusion, Frederick Crews (Metropolitan Books 2017)

This is a guest-review by Dr Benjamin M. Rubinstein

Burn this evil book. Burn it!

Freud: The Making of an Illusion, Frederick Crews (Metropolitan Books 2017)

As a proud Black Woman of Size, I simply could not read all of this book. It wasn’t that Frederick Crews is a white male, because I was relieved to discover that Crews has managed to divest himself sufficiently of white privilege and racist white solidarity to expose his fellow white Freud as the true criminal and pervert he was. Nevertheless, I was unable to process so much about whites and their white wickedness. And there’s worse to come, it seems:

The first director of the [Freud] archives [at the US Library of Congress], Kurt Eissler, saw to it that other papers would remain unavailable for many more decades, extending as far forward as the year 2113. (“A Note on Sources,” p. xv)

The mind boggles at what still remains to be exposed! But the facts are already clear, as Crews lays out in unsparing detail. Freud was an archetypal white: a greedy, selfish, unscrupulous control-freak interested only in power and money, and prepared to tell as many lies and hurt as many people as it took to get what he wanted. I was sickened to my stomach, repeatedly, even in that short portion of the book I managed to fully process.

Fortunately, Crews brings a dry wit and a sure eye for a comic quote or wry comment to the task of cutting Freud down to size. In between being sickened to my stomach, I chuckled heartily many times as I read what I managed to read. Here are some of the additional laughs I found by dipping into the unprocessed portion of the book:

“I read through your manuscript in one sitting,” he [Freud] enthused [to Wilhelm Fliess] in 1896, with reference to The Relationship between the Nose and the Female Sexual Organs. “I was exceptionally pleased with its plain assurance, the lucid self-evident connections between the individual themes, the unpretentious unfolding of its riches, and…its wealth of glimpses of new riddles and new explanations.” (ch. 23, “The Secret Sharer,” p. 426)

Psychoanalysts were expected to march in step behind Freud’s anti-masturbatory banner. Between 1910 and 1912 the Vienna Psychoanalytic Society devoted no fewer than eleven sessions to discussing the ravages of the vice, and although dissenting voices were raised, Freud remained adamant. (ch. 35, “Imposing His Will,” p. 642)

[Margarethe] Csonka had kept him [Freud] busy analyzing fabricated dreams that were designed to satirize his preconceptions. Freud was just wary enough to suspect that her dreams were trying to deceive him, but not wary enough to perceive that Csonka herself was the trickster. After each session, having retired to a café, she would amuse her girlfriend with uproarious accounts of her therapist’s fatuity. (ch. 35, p. 644)

Freud schmeud, baby. This creepy Viennese shyster was a pervert and crook in typical white male fashion. Frederick Crews is to be congratulated on making a major contribution to the on-going campaign to expose the white male icons of the past as woefully over-rated, wildly over-exposed and way-way-way over-due for replacement in the so-called Western canon by the silenced voices of Persons of Color – especially Women-of-Size of Color and LGBTQTSIA+ of Color.

Dr La’Toksha D’Bea’Qwarr is the Hymie K. Diamondberg Professor of Black Diaspora Studies at the University of East Brooklyn.