If Whites hope to ever win the demographic war which is being waged upon us, then we need long memories—and it makes no difference if what we remember is great or small.

Earlier this week, The View co-host and former-comedienne Whoopi Goldberg did one of those small things when she inadvertently insulted a great many Jews. She stated that the Jewish Holocaust was “not about race” and later doubled down on that. She didn’t say the Jewish Holocaust was a good thing, nor did she downplay it, revise it, or deny it. She simply removed race from the equation because she felt that Germans and Jews “are two groups of white people.” Presumably, she would have the same opinion of Caesar’s campaigns in Gaul or the English Civil War. It’s just whitey killing whitey, so where does race come into it?

Instantly, however, Jews from both ends of the political spectrum (and some nastier than others) showed Whoopi exactly where race comes into it: That would be everywhere. But, of course! And Whoopi Goldberg, mainstream media talking head that she is, should have known that.

Let’s start with that doyen of diaspora, Jonathan Greenblatt of the Anti-Defamation League, who came onto The View  to scold Whoopi for her transgressions:

Well, Whoopi, there’s no question that the Holocaust was about race. That’s how the Nazis saw it as they perpetrated the systematic annihilation of the Jewish people across continents, across countries with deliberate and ruthless cruelty.

Newsflash @WhoopiGoldberg 6 million of us were gassed, starved, and massacred because we were deemed an inferior race by the Nazis. How dare you minimize our trauma and suffering!

In an article called “Whoopi Goldberg’s Holocaust Comments Were Wrong – and I’m Glad She Said Them,” Nora Berman of the ever-useful Forward had this to say:

I am generally a fan of Whoopi. I enjoy her biting wit, and I truly don’t think she’s an anti-Semite. Yet if popular members of the mainstream media continue to affirm the false claim that all Jews are white and the Holocaust was an expression of “white on white violence,” then the broader lessons on how humans should treat each other that Goldberg was seemingly trying to articulate will be lost.

Then we have the motor-mouthed, Israel-first conservative Ben Shapiro:

Whoopi Goldberg explaining that the Holocaust wasn’t about race because these were ‘two groups of white  people’ isn’t just insipid, it’s insidious. It’s downplaying the minority status of Jews in order to uphold bullshit intersectional arguments that justify anti-Semitism today. The intersectional argument is that Jews are white people, and that Jews are disproportionately privileged thanks to ‘white supremacy.’

Even further on the Right, we have Daniel Greenfield of Front Page Magazine, who responded with an article entitled “Whoopi Goldberg’s Dumb, Antisemitic Holocaust Comments Will Come With No Consequences” (Not true; she did get suspended):

On The View and on Colbert, Whoopi “Rape, Rape” Goldberg once again showed that she’s an idiot and that the current racialist view of identity politics has holes you can drive a truck through.

And here’s Ace of Spades co-blogger J.J. Sefton, who is about as right-wing as you can get for a mainstream Jew. He has little of substance to add other than to use the L’Affaire Whoopi as an excuse spew ad hominems and rant incoherently about Democrats, as he is wont to do.

The truth of the matter is, there’s very little difference in the mindset of the thugs that murdered Yankel Rosenbaum in the 1991 Crown Heights Pogrom than in the fiend who egged them on, Al Sharpton. Nor Whoopi Rape-Rape. And it’s all because Anti-American Left crave power by any and every means necessary, including the age old strategy of divide and conquer. Whoopi is an unreconstructed pig ignorant stooge just as much as the homies who play the knockout game.

So, we should be a seeing a pattern here. Regardless of a Chosen One’s politics, being called “white” in the context of the Jewish Holocaust is deeply offensive. This is pretty much the alpha and omega of the Jewish grievance industry. In other words, when a Jewish writer, pundit, politician, activist—what have you—talks publicly about the Jewish Holocaust, you can count on it that it will be as a Jew first and foremost. It won’t be as a White person, or as an American, or a Democrat, or a Los Angeles Lakers fan. This is where the truth comes out, and it comes out urgently. This is why almost all public Jewish responses to Whoopi’s statements fall close to the Y-axis on the Grand Logarithmic Scale of Jewish Indignance.

Here is my slightly-less-than-scientific (read: fake) regression scatter plot analysis of the phenomenon: 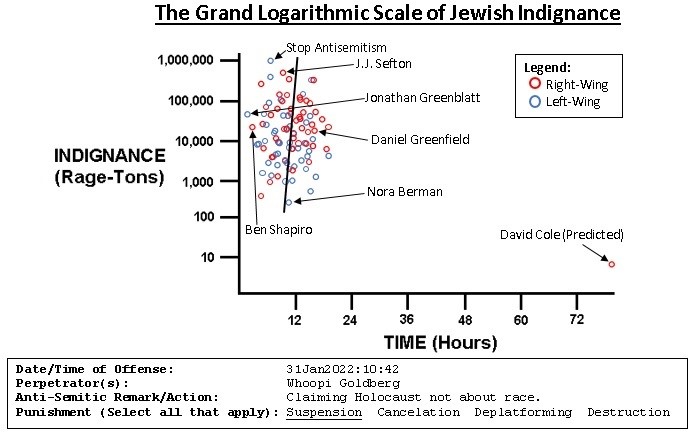 Note that the Right-to-Left correlation on this graph is somewhere around 0.00.

In fact, I did an internet search on “Whoopi was right” and got all of one hit. A not-entirely-terrible substack article from someone named MJ Rosenberg. His basic claim is that while Jews are White and have never considered themselves a race, we still need to fight racism, anti-Semitism, etc. (Sigh.)

Where’s Norman Finkelstein when you need him?

Anyway, for what’s worth, I’m with the Jews on this one. As I have stated before, Jews are not White people. If they were, they would have just shrugged their shoulders after Whoopi’s comment and forgotten all about it. Millions were killed in the Thirty Years War too, and you don’t see the French and Germans today taking offense over a claim that the slaughter wasn’t about race. That’s because it wasn’t.

But here is where our long memories need to kick in. From now on, whenever Jews try to attain some kind of advantage by claiming that they’re White, we need to remind them of the Jew-first standard they set for themselves during Whoopi’s little dreadlock drama. The violation of such standards is what led to the “My Fellow White People” trope on the Right, which catches Jews claiming they’re White when it suits them, and then later claiming they’re Jewish when it suits them. Here it is explained pretty well in The Forward (without bothering to refute it). This Stormfront thread gives a pretty good rundown as well. Jews don’t want to be considered white? Fine. And that’s how it’s going to stay. 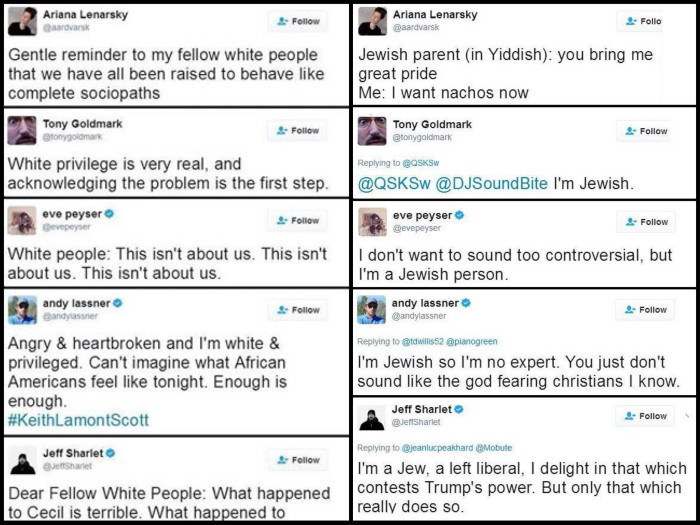 An instructive inverse of this scandal occurred back in 2016 when hard rock icon Ted Nugent re-tweeted a meme showing how some of the most powerful gun control advocates are really Jewish. (Yes, it is true.) Unlike Whoopi Goldberg, however, the meme reveals Jews rather than obscures them. But because the meme painted Jews as victimizers, they must not be seen as Jewish but as White. In Whoopi’s case, however, Jews are seen as victims. Therefore, they must remain as Jews. 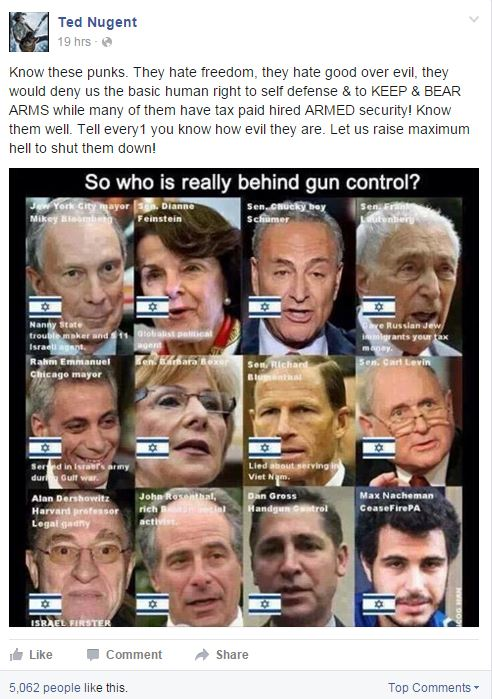 This is perfectly self-serving and hypocritical. And if you call such people out for it, they shriek “Anti-Semitism!” and try to ruin you. If not for the manifest power Jews wield today, there’d be no reason for Whites to take these people seriously at all—except, of course, as a threat. Case in point, the Trump-hating Jew Max Boot, someone I have written about before:

Max Boot is a disingenuous, ethnocentric Jew who hates white people—especially the ones that are as ethnocentric as he is. He’s then pretends to be white in order to convince other whites that they should allow themselves to become minorities in their own countries—to atone for the sins of a tiny fraction of their ancestors or to strive nobly for equality and social justice and other leftist illusions. He has no sympathy when whites complain about discrimination and ascribes this to “fear they are losing their privileged position to people of color” rather than any legitimate concerns for their group interests.

The article he wrote that prompted my response was entitled “Get a Grip, White People. We’re not Victims.” from 2019. In it, he complains about how Trump capitalizes on “white rage,” tells of an abusive White customer at a South African restaurant, frets over how 55% of Whites see anti-White discrimination as a problem, sheds a few crocodile tears over the plight of Blacks in America, and then links all of this to the 2019 El Paso shooting. This is how he ends it:

White people can be pretty clueless. (I know, I’m one myself.) Get a grip, folks. We’re not the victims here. Thinking that we are us is not just wrong. It’s dangerous. It’s a mind-set that can justify everything from a public temper tantrum to a shooting spree.

Anti-White Jews like Max Boot are the reason why we have the “My Fellow White People” trope to begin with. This is not anti-Semitism. This is truth. So, get a grip, Jews. With the Whoopi Goldberg affair, you showed your true colors. And we’re going to hold you to it.