Well, that didn’t last long. Chesa Boudin, the “progressive” district attorney of San Francisco, was recalled in a landslide election on Tuesday. Evidently, even that city’s progressive voters finally got tired of replacing their car windshields. (On the upside, once out of office, Boudin can keep prosecuting as many criminals as he did while in office.)

In a shocking upset, the most liberal city in the nation just voted to recall a pro-criminal D.A.

Q: Should you be dedicating your time to:

Crime is primarily a state and local issue, but there are some things the federal government can do. How about auditing the “homelessness” industry for fraud, graft and corruption? (And the drug rehab industry, while you’re at it.) In the last decade, homeless “advocacy” seems to have displaced Hollywood as the most well-compensated and glamorous industry in California.

Michael Shellenberger’s 2021 book, San Fransicko: Why Progressives Ruin Cities, details how progressives are foisting drug-addicted mental patients on an unsuspecting public. The problem is less the homeless — the drug-addicted mental patients you will always have with you — and more the well-heeled liberals getting rich off the homelessness racket.

He begins by quoting all manner of homeless “advocates” — i.e., people who make money off of homelessness — such as Dr. Margot Kushel of the University of California-San Francisco (UCSF), who insists that homelessness has NOTHING to do with drugs or mental illness. “We’ve always known,” Kushel said, “that most homelessness is a result, pure and simple, of poverty.” 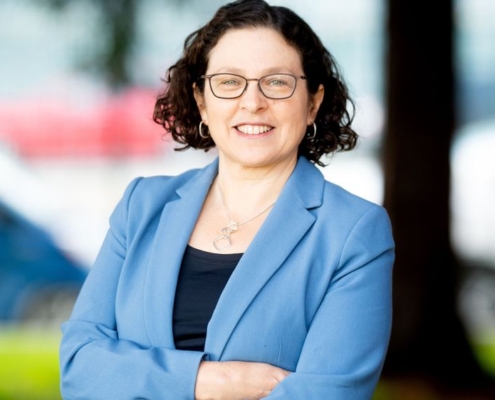 TOO Addition: Photo from a Forward article: “Dr. Margot Kushel is one of the nation’s leading researchers into geriatric homelessness, she approaches the topic with her Jewish values in mind. In 2006, Kushel co-wrote the first study on the issue, discovering that the average age of the homeless population in the United States was in the mid-50s. Since then, Kushel, who is 52, has been awarded tens of millions of dollars to research homelessness.

A lot of valuable information comes from sentences that begin with “we’ve always known.”

Convinced of the truth of this preposterous maxim, San Francisco has been doling out billions of dollars to solve homelessness, by providing the homeless — or as we are now commanded to call them, “our unhoused neighbors” — with shelter, food and massive cash payments.

Also free needles! Because homelessness is just a matter of being poor, as “we’ve always known.”

On the other hand …

In 2004, nearly 5,000 homeless people were offered housing by then-Mayor Gavin Newsom. Only 131 accepted.

And because, as Einstein said, doing the same thing over and over and expecting different results is the definition of excellence — isn’t that the quote? — San Francisco just keeps trying the same thing. Under a different mayor, about 15 years later, 150 vagrants were removed from a homeless encampment and offered free housing. Eight accepted.

But that makes no sense! Homeless advocates assured us our unhoused neighbors are just like you and me, except they can’t afford the rent.

Another possible cause of homelessness is hinted at in a recent Harvard University study of chronically homeless people in Boston who were given permanent housing. After following the group for 14 years, last year the researchers released their results: 86% of their subjects were beset by the “trimorbidity” of mental illness, substance abuse and medical illness. After 10 years, only 12% were still housed. Forty-five percent died before the completion of the study.

Similarly, in 2019, San Francisco’s health department found that fully half of the city’s homeless population — currently housed or not — are both mentally ill and drug addicts. About 1,600 of the city’s estimated 8,035 homeless “frequently used emergency psychiatric services.”

The pernicious — but profitable! — idea that homelessness is caused by poverty has led the city to lavish unimaginable aid on the “poor.” In straight cash welfare, SF offers $588 a month to the poor — and that doesn’t include $192 in food stamps. Compare that to Los Angeles, where the maximum cash payment to the poor is $221, or New York City, where it’s $183.

That $780 a month in cash and food stamps doesn’t include all the free stuff given to the homeless through cutout agencies, like churches and nonprofits, funded by taxpayer dollars and tax-deductible “charitable” donations.

Tom Wolf, a formerly homeless drug addict, said that, thanks to all of San Francisco’s giveaways, he was able to spend his entire general assistance payment on heroin. Which San Francisco also helps out with, giving away 6 million free needles to drug addicts every year. That’s more than New York City dispenses — with a population 10 times larger.

As a result, drug overdose is the leading cause of death among the homeless in San Francisco.

The mother of a drug-addicted, homeless young man told Shellenberger that he describes San Francisco as “Pleasure Island” in the movie “Pinocchio”:

“On one side of the street are people giving you food and clean needles. On the other side of the street are all the drug dealers. It’s like getting all the candy and treats that you think you want. You think you’re having fun. But little by little it’s taking away your humanity and turning you into something you were never meant to be, like how the kids start turning into donkeys in ‘Pinocchio,’ and then end up trapped and in cages.”

What kind of sick society would do this to people?

One possible answer: a society that rewards money-grubbing narcissists with no concern for their fellow man, masquerading as giants of compassion. There’s a ton of money to be made in the helping-the-homeless business. As the formerly homeless Wolf told Shellenberger, “[The homeless nonprofits’] whole intention is to keep more people in this cycle because they’re getting money for it.”

Say, whatever happened with UCSF’s Kushel — of the “we’ve always known” metric? In 2019, she was the lucky recipient of a $30 million grant from San Francisco billionaire Marc Benioff (Salesforce founder) to study homelessness.