The competition would be intense, but if there were an international search to find the world’s most repulsive and irritating Jew, my money would go on Britain’s very own David Baddiel (born 1964). He’s a highly successful comedian who combines minimal talent with maximal smugness. He’s overweight and oily and, like Harvey Weinstein, he has one of those obnoxious Semitic beards that look like fungus growing on a turd. He spoke out passionately for pornography in his youth and his Twitter bio consists of the single word “Jew.” I think the k-word would suit him much better. Even the very philo-Semitic shiksa Julie Burchill finds him repulsive. She’s likened him to a “severed afterbirth” and alleged that: “The U.S. has done, is doing and will do more damage to this planet and its people than Nazi Germany, fascist Japan and David Baddiel put together.” 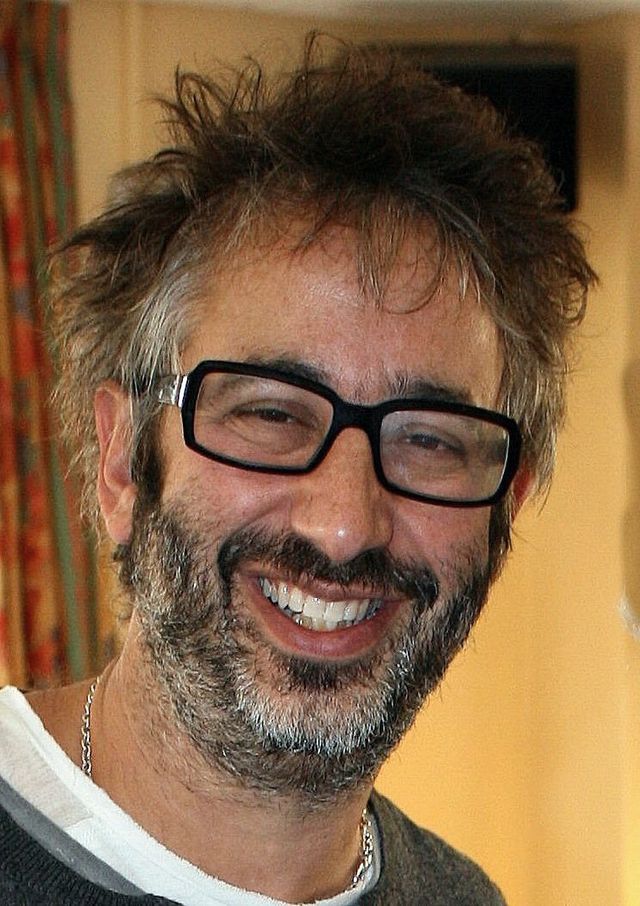 David Baddiel and his facial fungus (image from Wikipedia)

That line from Burchill is far funnier than anything Baddiel himself has ever come up with, which is perhaps why he was so upset by it. The Guardian promptly issued an apology: “In Julie Burchill’s column, Weekend, September 16[, 2000], she bracketed together David Baddiel, nazi Germany and fascist Japan. We wish to apologise unreservedly for the distress caused to Mr Baddiel and his family by this article.” Twenty years later, he was still complaining about what Burchill had said: “I can’t think of anything more extreme than that.” In other words, David Baddiel is a comedian who can’t take a joke. He’s also a graduate in English Literature who can’t recognize hyperbole. He can’t compose a balanced or graceful sentence either, as you’ll learn if you have enough masochism to try his best-selling polemic Jews Don’t Count (2021). In the book he complains bitterly that the left doesn’t recognize Jews as victims, doesn’t work to rescue Jews from oppression, and consistently portrays Jews as belonging to the privileged White majority. The irony is overwhelming. BaddieView Postl himself is a shining example of a highly privileged Jew who has enjoyed success far beyond his merits thanks to his Jewishness, not his “whiteness.” His unfunny comedy has been richly rewarded and broadcast to millions, decade after decade. His badly written Jews Don’t Count was lavished with praise, chosen as a “Book of the Year” by the London Times, and will soon appear as a television documentary broadcast to more millions. But Baddiel still thinks of himself and other Jews as victims. He’s a Goliath who fondly imagines that he’s a David, bravely facing the overwhelming power of gentile prejudice in a cruel and uncaring world.

Well, let’s look at a recent example of a Jew “not counting” and see if Baddiel’s ideas can explain it. In August 2022, the veteran American photographer Annie Leibovitz was harshly criticized for taking some poorly lit photographs of the Black Supreme Court Justice Ketanji Brown Jackson. Annie had sinned against the sacred principles of Diversity, Inclusion and Equity (D.I.E.) and the verdict of the Black journalist Tayo Bero was blunt: “Leibovitz’s photographs are what happens when Blackness is seen through a white gaze that is incapable of capturing its true beauty.” Got that? Leibovitz was deploying the “white gaze.” And when Leibovitz used Abraham Lincoln as “the focal point of the first image,” she was allegedly “projecting a white savior narrative.” Got that? Leibovitz was acting as a “white savior.” And all this set a stark contrast with Leibovitz’s work on behalf of her own race: “when white people are her subject, Leibovitz manages to capture them beautifully.” In other words, Leibovitz is a White racist who consistently fails to find one of the “many ways to capture Black women’s beauty.” 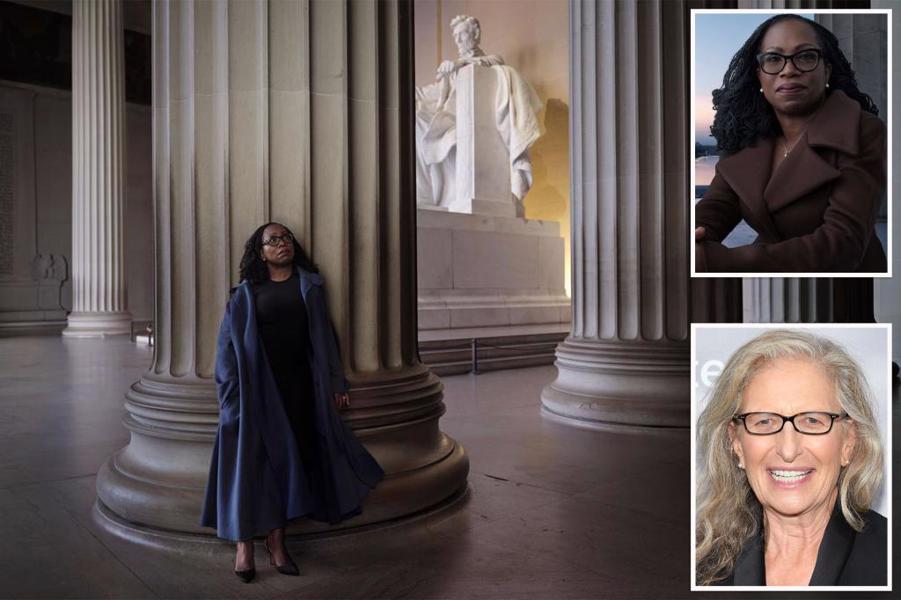 This criticism of Leibovitz appears to be an excellent example of how “Jews Don’t Count.” That’s because she’s not White but Jewish — and proudly so. But no Jew rushed to correct the claims that she is White. However, imagine if she were being praised as a great “white photographer” and as a shining example of “white artistic genius.” Jews would shriek with outrage. She’s Jewish, not white, they would insist. But for Jews like David Baddiel, she doesn’t count as a Jew when she’s being condemned for failing to treat Blacks with sufficient reverence. All at once it’s acceptable to “erase” her Jewishness and “bracket” her with the oppressive White gentile majority. What is going on? Well, it isn’t explained by Baddiel’s theory of how “Jews Don’t Count.” But it is explained by my theory of Jews as Schrödinger’s Tribe. In a famous thought-experiment devised by the Austrian physicist Erwin Schrödinger (1887–1961), a cat is simultaneously alive-and-dead until the collapse of a quantum wave-function. In the reality of Western politics, Jews are simultaneously a minority and not-a-minority, depending on what best suits the interests of Jews.

Jews are a minority when they want to cast themselves as victims of oppression, but not-a-minority when Whites are being criticized for unfairly dominating Western institutions and culture. When a self-righteous non-White claims that publishing or science or finance or law is “too white,” Jews do not point out that, in fact, Jews are vastly over-represented in those fields. For example, every Chair of the U.S. Federal Reserve was Jewish in recent decades and Jews occupy a vastly disproportionate number of seats on the American Supreme Court. By keeping quiet about this over-representation, Jews are allowing themselves to be portrayed as “white” and ensuring that it will be genuine Whites who are displaced by racial quotas. They are also avoiding potentially dangerous questions about why Jews are over-represented. If we’re all the same under the skin, it follows that in a fair society every racial group would be represented in exact proportion to its share of the population. The “over-representation” of Whites is used as proof positive that we don’t live in a fair society. No, we live in a society where, for example, the innate genius of Blacks is crushed and denied expression.

That’s why — according to leftists — no Black has ever won the Nobel Prize for Physics or the Fields Medal in mathematics. The Black genius is there, but the White justice isn’t, because White men have unfairly dominated those fields and excluded countless deserving Blacks (and women) down the centuries. Or so the leftist narrative goes. In fact, of course, Jews have won awards and made huge contributions in physics, mathematics and other intellectually demanding fields out of all proportion to their tiny share of the population. How could this have happened in Western societies replete with minority-excluding White male Christian bigotry?

That’s a question that Jews don’t want to be explored, because the obvious answer is that White Christian bigotry isn’t so powerful after all. When an allegedly oppressed minority has intellectual gifts, that minority can flourish in the West. But Jews don’t want their intellectual gifts to be explored either, because that would explode the leftist lie of innate and absolute human equality. It’s no coincidence that Jewish biologists like Stephen Jay Gould, Richard Lewontin, Leon Kamin, and Steven Rose — all  professors at prestigious universities — have led the fight to deny the existence and importance of race. They’ve insisted that the brain has been miraculously exempt from evolution even as human beings have migrated into hugely different environments and maintained isolated breeding populations over millennia. In fact, those Jewish race-deniers are lying to protect Jewish power. Different races of human being haven’t simply been evolving in isolation for millennia, they’ve been interbreeding with different species of the Homo genus and acquiring new genes that affect cognitive function. Homo sapiens interbred with Neanderthals when they migrated into Europe and with Denisovans when they migrated into Asia. Meanwhile, Homo sapiens was interbreeding with other now extinct hominids back in Africa.

In other words, Whites and Blacks and Yellows haven’t simply evolved to be cognitively and psychologically different: they’ve interbred to be different. That’s biological reality, but it contradicts one of the two big lies of modern leftism. The first lie is that of equality. Leftism preaches that we’re all the same under the skin — Blacks and Whites, men and women, gays and straights all have exactly the same potential and are capable of the same high achievements. The second lie is that of inequality. Leftism preaches that, in the West at least, majorities are innately evil and minorities innately virtuous. The contradiction between the two big lies of leftism doesn’t weaken the ideology or embarrass leftists. On the contrary, it empowers the ideology and emboldens leftists. Jews like David Baddiel and Stephen Jay Gould are at the heart of the anti-White lies just as they are at the heart of White-hating leftism.