Charles Dodgson: The other day I came across a somewhat befuddled but nevertheless  interesting op-ed in the New York Times titled “The Protocol Society” (22 Dec. 2009). The idea is that nowadays industry not only makes physical things but packages sets of instructions. An obvious example is a piece of software. So is a car, most of the value of which is tied up with the knowledge that goes into its design. The steel and plastic are not worth much unshaped. There are important difference between physical and information-rich products. The former are costly to produce, the latter cheap once the design is there. Metal and glass are costly to produce and transport. But an idea, once formulated, can travel at the speed of light and be copied endlessly at essentially zero cost. The pharmaceutical industry is another example. The first pill can cost billions to develop but from there on producing copies costs less than a dime a dozen.

My only objection at this stage of the article is that physical culture has always had elements of the protocol economy. The first sewn clothing must have been a creative act of genius but because imitation is easier than invention it could spread to the hoi polloi. The ingredients for simple tools are often readily available, but not the knowledge about how to make them. The Neolithic was an economic and lifestyle revolution driven by the spread of innovations. Population density rose 100 times with profound ramifications for human evolution, as argued by Gregory Cochran and Henry Harpending in their  recent book, The 10,000 Year Explosion.  My point is that the protocol economy is not new, just accelerated.

Then the article veered off into the fascinating subject of social implications. It also became horribly befuddled where before it had been middling.

Protocols are intangible, so the traits needed to invent and absorb them are intangible, too. First, a nation has to have a good operating system: laws, regulations and property rights.

Oh really! Ideas are intangible. Does it follow that the brains that produce them are intangible? What a remarkably silly thing to say. And how did nationhood enter the conversation? The author, whose name I had not yet noticed, was using the nation concept loosely to say the least. The term crops up 5 times, once in a book title. It seems that any state is a nation. The New York Times was making the same error as George W. Bush who throughout his presidency called anything with a government a “nation.” More of the distinction between state and nation in a future post.

Then came the paragraph that made me look for the author’s name.

A protocol economy tends toward inequality because some societies and subcultures have norms, attitudes and customs that increase the velocity of new recipes while other subcultures retard it. Some nations are blessed with self-reliant families, social trust and fairly enforced regulations, while others are cursed by distrust, corruption and fatalistic attitudes about the future. It is very hard to transfer the protocols of one culture onto those of another.

The article does not hint at the possibility of tangible differences between societies. Consistent I suppose. What possible effect could genes and brain characteristics have on a population’s production of useful ideas? Or for that matter what could stable family life and general altruism have to do with,  say, hormone levels and evolutionary history?

The thing is that this ignorance is willful. Someone who has been around as long as David Brooks knows the evidence or knows where to find it. In addition the NYT does not publish all the news fit to print on such matters. Such people together with such publications create synergies of lies and deception.

The author is David Brooks. Here he is: 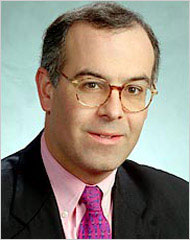 The rewards for towing the line are considerable. Mr. Brooks has an illustrious career providing Americans with an outlook designed to lead them away from their vital interests. Here is one career trail of this “conservative” and very well-connected columnist:

He is currently a commentator on “The Newshour with Jim Lehrer.” He is the author of Bobos In Paradise: The New Upper Class and How They Got There (basically a portrait of people from his ethnic group — combining “the values of the countercultural sixties with those of the achieving eighties) and On Paradise Drive : How We Live Now (And Always Have) in the Future Tense, both published by Simon & Schuster.

Charles Dodgson: 57.5% of Swiss voters have approved banning the construction of further minarets in a referendum held on November 29. The will of the Swiss people has been condemned by spokesmen for Islamic groups, the United Nations, and the European Union. In addition large Swiss multinational corporations have expressed concern that the vote could endanger markets for their products. However, patriotic parties in Italy, the Netherlands, and Denmark are calling for similar measures to be passed by national parliaments.

The Sunday Telegraph reports that the BBC is trying to broaden the appeal of the highbrow Radio 4 network to attract more “ethnic” listeners (“Radio 4 to get in tune with ethnic listeners”, 29 Nov. 2009, p. 13; and see the Daily Mail report.)

Critics claim that only 2% of listeners are Asian or black. The BBC has commissioned research to discover the diversity of Radio 4 listerners. Research included focus groups with Muslims and Hindus in which they were asked for advice on programming. The review followed criticism in 2001 from Greg Dyke, the former director general of the BBC, that the corporation was “hideously white”. Despite there being many minority presenters on Radio 4 the present controller of the network, Mark Damazer, apparently agrees that the BBC is “too white” because he met with minority activists to seek guidance on how to meet their wishes. One such meeting was held with Ashok Viswanathan, a founder of Operation Black Vote, who remarked: “Radio 4 is still too white and has a tweetness to it, but their response to the criticism has been positive and what we’re hearing is encouraging.” One result of the new approach will be a programme starting in January to be hosted by Nenjamin Zephaniah, a poet belonging to the black consciousness Rastafarian movement. Some listeners have expressed concern that the changes will cause some existing shows to be axed.

Comment: The news signals a step-up in multiculturalism by the BBC and a retreat from assimilationism, in which immigrants are expected to adopt the folkways of the indigenous society. Yet multicutluralism was officially dumped by the Labour government following the 2006 terror bombings in the London transport system. Notice that Anglo ethnic sensibilities are given practically no voice, while open minority self-interest is taken seriously. English and British ethnicity is not even named, as if only minorities have ethnicity. The changes are intended to provide Radio 4 with a “distinctly ethnic angle”, as if its content has not always consisted of English and British culture. According to this view the only identity the English have is their whiteness and that is illegitimate. The irony! It seems that when the purpose suits the liberal establishment and minority activists are happy to adopt the racial categories employed by the neo-Nazi right. The denial of Europeans’ ethnic identity is one of the most poisonous lies spread by our liberal elites. The language of this report, relayed without revision by the conservative Telegraph, reflects a root cause of Britain’s surrender to Third World immigration. It illustrates the wisdom of the BNP’s defence of “indigenous” British peoples.