Tim Wise learned a few years ago that he has nothing to gain and everything to lose from a fair and open debate about racial issues. Fortunately for him, modern technology has empowered him to create imaginary straw men to win debates against. This is a great catharsis for him, as his opponents walk right into all of his traps, resort to name-calling, and even fart.

Behold: Arguing With Xenophobe Bear: Volume Two of the “Bears and Bigots” Series.

Latina Bear: Why did you assume I was here illegally? Is it because I am brown?

Republican Bear: No. I am not a racist!

Note that Republican Bear’s attempts to pretend that it’s not about race are easily shredded by Latina Bear. As an advocate for White Americans, I wish that Republican Bear had the confidence and integrity to admit that he’s defending the interests of his people..

Republican Bear: I don’t have a problem with Mexicans who come here legally, like my ancestors did.

Republican Bear: What part of illegal don’t you understand, Chica?

Republican Bear has now managed to both renounce his racial interests AND spout racial epithets. He is one stupid bear.

Latina Bear: What’s legal and illegal is about power and who makes the laws. White people made the laws and protected themselves in the process.

Oh, snap! She’s moving in for the kill! How dare White people protect themselves!

Latina Bear then argues that Mexicans aren’t reclaiming land that they believe belongs to them, following that argument up with the assertion that Mexicans are merely reclaiming land that belongs to them. Republican Bear doesn’t call her on this naked contradiction. All she had to do next is suggest that our government formerly  promoted the interests of White people, which Republican Bear has already conceded to be illegitimate..

Latina Bear: I am tired of being treated like I don’t belong here by people like you who seem to think you’re entitled to this nation, and to keep others out who don’t look or sound like you.

Mexicans think they’re entitled to Mexico, and keep others out who don’t look or sound like them. Why can’t we do that? Are all national identities and borders illegitimate or only ours?. 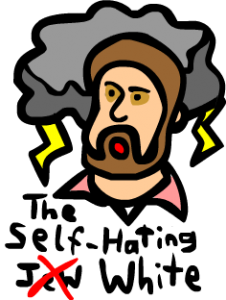 Finally, Republican Bear has a full meltdown, having been exposed as a Fox-News-viewing Tea-Party-supporting Birther who’s obsessed with firearms. Had Latina Bear had a similar meltdown, admitting that she supports the Reconquista, is a member of MS-13, and has a dozen anchor babies, that would have been racist stereotyping.

Directly after Republican Bear throws a tantrum and farts (WTF?), Latina Bear blows him off and does a monologue. This sort of hateful and vulgar garbage is classic Wise. Just like Republican Bear, Tim Wise starts out trying to sound like a reasonable and logical defender of truth and justice, but can only maintain the act for so long. Inevitably, he boils over with outbursts of anti-White stereotyping, racial hatred, and scatological nonsense..