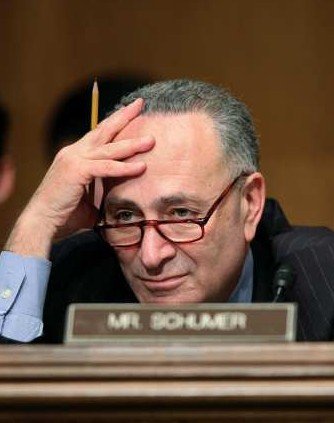 In all the jaw-dropping and outrageous moments of the Madoff fraud saga, nothing surpassed it. But almost no one knew.

Starting about 1 hour 38 minutes 44 seconds into the Senate Banking Committee Hearing on “The SEC’s Failure to Identify the Bernard L. Madoff Ponzi Scheme and How to Improve SEC Performance” (September 10, 2009) Senator Charles Schumer (D-NY) looks over his glasses at an SEC bureaucrat and intones:

When you read Mr. Kotz’s report (PDF)…it’s just astounding…How the heck did this happen…all you had to have was an IQ of about 100 and even a semi desire to find out what happened…you didn’t have to turn over every stone…most people if they’d just read what happened they’d say there’s got to be fraud…to let Madoff escape….

That is absolutely true.

If the SEC man had been a public servant of suicidal courage he would have squared his shoulders, looked Schumer in the eye, and said

Because, Senator Schumer, you called the SEC during our last and best-informed investigation, questioning our activities. Obviously Mr.Madoff was one of your constituents, and it was easy to find out he was an important contributor of yours. We were afraid.

A true hero would have added:

We could see that both of you were Jewish and we knew that very many members of the Jewish community, some of them very powerful, were extremely pleased with the returns they were receiving from Madoff. We knew he was a hero to many Jews. We knew that any effort to shut down Madoff before he actually failed would reap terribly lethal consequences.

That would have been absolutely true as well.

The SEC man was not a hero.

The evidence that Schumer tried to influence the last SEC Madoff investigation (2006–08), which resulted in negligible sanctions on Madoff, stems primarily from whistle-blower Harry Markopolos’s book No One Would Listen.

When he volunteered to give evidence on the fraud to the newly-appointed Inspector General of the SEC, David H. Kotz, Markopolos was surprised to be asked to testify on oath:

David Kotz began by telling me right off the bat that he was conducting a criminal investigation…. He asked a lot of questions about possible interference in the investigation, ranging from asking me if I knew anything about the phone call supposedly made by Senator Schumer (I didn’t)…. (pp. 239–43)

Previously Markopolos had said, “I was told by a government agency, for example, that at some point New York Senator Chuck Schumer called the SEC to inquire about the Madoff investigation” (p. 141). (From the context, this was all clearly in connection with the last SEC probe.)

Markopolos then proceeded to stand on his head to demonstrate that he had no suspicions about Schumer, but added

the SEC is funded by Congress.… For a middle-level SEC employee with ambitions, any case in which an important politician is involved is a case he or she wants to stay far away from.

That a Schumer call would chill an investigation is all too plausible.

But it gets weirder. The Senate Banking Committee hearing on September 10th 2009 had two sessions. Markopolos was scheduled to testify at the second session:

I appeared before what was supposed to be the Senate Banking Committee…only Senators Chuck Schumer, who had made a phone call to the SEC [my emphasis], and Jeff Merkley, a Democrat from Oregon, returned. Schumer took over the questioning…

When we returned, the whole feeling in the hearing room had changed. The SEC had reserved all the seats in the room… [My lawyer] took one look round and whispered to me, “The fix is in”.… I was surprised that I was asked so few questions. Senator Schumer seemed to focus on the other members of the panel … [my lawyer] started handing me cards urging me, “Jump in whenever you can.” …

Schumer carefully controlled this panel. I’m sure he had his reasons.

He certainly did. Confronted with an irrepressible maverick like Markopolos, Schumer must have been terrified that his intervention at the SEC would be blurted out. No wonder he took over the committee.

Needless to say, exactly how close Schumer really was to the Madoffs is obscure. No doubt dozens of wealthy New York Jewish families gave as much as Madoff to his campaigns. But Fortune claims

New York Senator Charles Schumer stopped by [Madoff’s] office in the run-up to the Iraq war and gave a rousing talk on the trading floor. (James Bandler & Nicholas Varchaver, How Bernie Did It, April 30, 2009)

And a poster at Huffington Post claims there was a Madoff-Schumer fund raiser at some point.

In our essay Is the Madoff Scandal Paradigmatic, Kevin Macdonald and I said

Thoroughly investigated, the Madoff scandal has the potential to illuminate the economic and political prerogatives usurped in late 20th-century America by what can only be described as the new ruling class. That will not be allowed to happen.

This could not be more vividly illustrated than by the Kotz report itself. This 457-page document prepared by the newly appointed Inspector General of the SEC, dated August 31 2009, spends 121 pages discussing why the investigation of 2006–08 — the last one before the collapse — failed and never mentions Senator Schumer’s call. Not even to dismiss it as a possible cause. This despite the fact that it appears to be only because of Kotz’s questions and Markopolos’ honesty that we know about the call at all.

To my mind this utterly destroys the integrity of the report. How can you evaluate a massive investigative failure and not mention an intervention by a very prominent Senator during the last and biggest probe?

H.David Kotz is Jewish and the son of an immigrant indirectly from Russia.

The only reference in the media to the Schumer intervention appears to be Schumer Denies Report He Called SEC on Madoff Probe by Glenn Thrush in Politico (February 26, 2010) — actually a denial by a staffer. Curiously this story is no longer archived on the Politico site but lingers on in cyberspace.

Recently I condemned The Picower Madoff settlement: A $7.2 Billion Whitewash.

Comparatively speaking, that was just a splash.