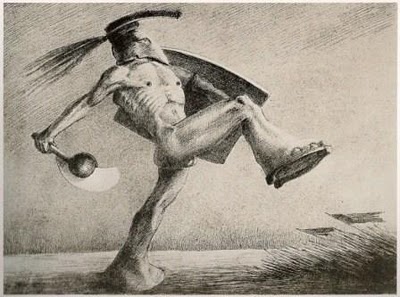 (Translated from the French by Tom Sunic.)

Modernity successfully gave birth to three major competing political doctrines; liberalism in the eighteenth century, socialism in the nineteenth century and fascism in the twentieth century. Being the last in line, fascism was also the one that disappeared most rapidly. However, the breakdown of the Soviet system has not brought to a halt socialist aspirations and even less so the ideas of communism. Liberalism, for its part, seems to be the biggest winner in this competition. In any case the principles of liberalism, spearheaded by the ideology of human rights, and thriving now within the New Class all over the globe, are today the most widespread within the framework of the process of globalization.

None of these doctrines are totally wrong. Each one of them contains some elements of truth. Let us have a rapid look at this panorama. What needs to be retained from liberalism is the following; the idea of freedom accompanied by the sense of responsibility; the rejection of rigid determinism; the importance of the notion of autonomy; the critique of statism; a certain tendency towards republicanism, anti-Jacobinism and anti-centralism. What needs to be rejected is: possessive individualism; the focus on the anthropological concept of the producer vs. consumer in which everybody searches for his best interest; the principles based on what Adam Smith called “the gift for peddling,” that is, the inclination for tradeoffs; the ideology of progress, the bourgeois spirit, the primacy of utilitarian and mercantile values; the paradigm of the market — in short, capitalism.

What needs to be retained from socialism are the following points: its critique of the logic of the capital in so far as socialism was the first to analyze each of its economic and supra-economic dimensions; the idea that society must be defined as a whole (holism, the original key-concept of sociology); the desire for enfranchisement; the notion of solidarity and the idea of social justice. What needs to be rejected is: historicism; statism; the drive toward egalitarianism and doleful hypermoralism.

From fascism what needs to be retained is the following: the affirmation of the uniqueness of identity of each people and its national culture; the sense of heroic values; the bondage between ethics and aesthetics. What needs to be rejected is: the metaphysics of subjectivity, nationalism, Social Darwinism, racism, primitive anti-feminism and the cult of the leader, and of course, again, statism.

Will the fourth political theory, the one the twenty-first century so badly needs, be a radically new doctrine, or will it provide a synthesis of what was best in the preceding ones? In any case this project has been a major focus of interest of (what one calls) the “European New Right” for well over 40 years.

The twenty-first century will also be the century of the 4th Nomos of the Earth (general power configuration at the global level). The First Nomos, the one where nations lived relatively isolated from each other, came to an end with the discovery of America. The Second Nomos, embodied by the Eurocentric order of modern states (the Westphalian order), ended with the First World War. The Third Nomos was the one in place since 1945 and it shaped the Yalta regime and the Soviet-American condominium.

What will be the Fourth Nomos? That one may take on the form of a unipolar America-centric world, i.e. a vast global market, that is to say, an immense free trade space, or possibly a multi-polar world where major continental blocks, being both autonomous power actors and hubs of civilizations, play a regulatory role vis-à-vis globalization, preserving thus the diversity of lifestyles and cultures that make up the wealth of mankind.

But it may just as well be said that we have entered now World War IV. World War One (1914–18), which ended for the benefit of the City of London, had brought about the dismantlement of the Austro- Hungarian and the Ottoman empires. The two big winners of the Second World War (1939–45) were the United States and Stalinist Russia. World War III corresponded to the Cold War (1945–89). It ended with the fall of the Berlin Wall and the disintegration of the Soviet system, mainly to the advantage of Washington. World War IV began in 1991. It means a war led by the United States against the rest of the world; a multifaceted type of war, both militarily and economically; both at the financial, technological and cultural level and inseparable from the world-wide “enframing” and rationalization of everything (‘Gestell’) by boundless capital.

The evolution of warfare depends not only on technological advances in armaments, but also on the succession of political forms and institutions to which they are related. One can say that the well-defined military forms of conflict have gone through four stages in modern times: first came the war of sovereign states — as a fall-out of the birth of modern politics, so well described by Hobbes and Machiavelli. In other words back then we were witnessing the dispossession of the theological in favor of a pure political conception of the sovereign. Henceforth, wars were solely conducted for the interests of each state. These were limited wars — wars against justus hostis (“just enemy”), in which only a specific political order was defended.

In the 18th century surfaced the “democratic war” of nations, who in their turn became sovereign actors. This was also the war that included irregulars while giving birth to guerillas within the context of rising nationalism, and in which what needed to be defended was a given territory as the first priority. In the nineteenth century one could witness the rise of wars conducted in the name of humanity, i.e., wars of a moralizing and criminalizing nature, wars based on an ideology in which abstract principles were defended. This type of war signaled the return of “just war” (its first apparition could be observed during the American Civil War). The fourth form of warfare is now the war against “terror” (or “Star Wars”) — a war of asymmetric and total character.

In many aspects we have already entered the fourth dimension of warfare. Entering this fourth dimension brings us closer to the moment of truth. The question remains as to what will be the general configuration of issues in this century, the major lines of demarcation and the decisive cleavages? For the time being we still live in a kind of interregnum. Yet from now on, the essential issue needs to be addressed: the enigma of the subject in the historical process in a world dominated by Capitalism, in which Capitalism is itself subject to terrible internal contradictions, while at the same time becoming stronger and stronger day after day. Who will be the historical subject to shake things up in life now?

Being a historical subject and not an object of the history of others requires full self-awareness and awareness of how to unfold oneself towards one’s own potential. Heidegger spoke of Being (Dasein), a Being shaped by his time, waiting to unfold. But there is also a Being (Dasein) of peoples in the political sense of this term. All peoples are waiting to see the end of their alienation —  as peoples. Facing the objectified forms of their work — which is represented by capital — they need to affirm themselves as historical subjects in the present age — in order to become again the subjects of their own social endeavors.

Alain de Benoist is a philosopher residing in France.  His websites are: http://www.alaindebenoist.com/ and http://www.revue-elements.com/. This editoiral  was originally published in Elements, Nr. 136, June  2011.