There is no question that Hollywood is internally driven to promote diversity, as shown, for example, in two recent TOO movie reviews: James Edwards’ Driving Miss Ditzy: Review of The Help and Edmund Connelly’s “Unstoppable: Why I write.” Typical movies and TV fare not only turn on diversity themes, like The Help, but so much of it has relatively subtle pro-diversity messages, like bit parts for counter-stereotypical Blacks in otherwise all-White programming. The 24/7/365 propaganda machine.

But the other side of  the coin is that the media industry is under a great deal of pressure to promote diversity from outside activist groups, as illustrated by a recent LATimes article “Concerns about lack of minorities in NBC’s family; Latino groups raise an issue with KNBC, and NBC’s fall schedule shows a reversal from characters’ ethnic diversity last season.” Latino groups are upset that a Latino anchor on the local NBC affiliate was removed, so they don’t  have any Latino anchors. The altruistic and high-minded activist groups (who want these companies to hire more people like themselves) were able to get a memorandum of understanding with NBC to “recruit and retain more Latinos so that their workforces more accurately reflect the communities they serve.” So much for the idea that  immigrants only do jobs Americans won’t do. Executives are “are scrambling to address the concerns”–doubtless backed up with an implicit threat of a lawsuit or problems in renewing licenses if nothing is done.

Incidentally, one strategy that TV stations use to have their cake and eat it too is to hire White people with Spanish-sounding names. Here’s Carlos Granda, the reporter from KABC who interviewed me on the Breivik thing: 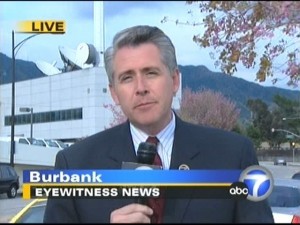 If people like Granda were the whole story about incorporating Latino diversity, it really wouldn’t be a problem for Whites.

The problem that NBC has is that the shows starring Blacks that they have come up with haven’t drawn an audience. When NBC merged with Comcast, they had to assure the FCC that they would rectify their “historically poor record when it came to placing African Americans in front of and behind the camera.” They got their merger, but the problem is that despite a lot of promotion, the show that they were using to accomplish this lofty goal, Undercovers, “never caught on with viewers and was canceled by early November.”

The institutional power of the multicultural left is the other part of the equation. TV stations must renew their licences periodically and they must get approval for mergers. Activist groups have a lot of power in this process, as seen here by the formal statements that NBC had to make to get approval and by their “scrambling” to meet the criticism of these groups. 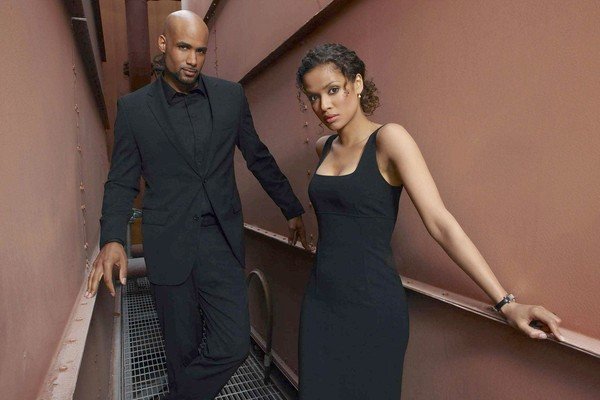 LATimes caption: Boris Kodjoe and Gugu Mbatha-Raw starred in "Undercovers," which NBC trumpeted as a response to opponents of the network's merger with cable giant Comcast who contended NBC had a historically poor record when it came to placing African Americans in front of and behind the camera.

Hollywood loves diversity, but it also loves profits and ideally it would like to combine them–as in successful movies like Unstoppable and The Help. But  White audiences don’t seem to want to watch a Black-dominated TV show like Undercovers week in and week out. It’s noteworthy that “NBC is not the only network struggling with the issue this season; new shows on rival networks feature few people of color in prominent roles.”

The usual formula for success for TV is to center the show around at least some White people (e.g., Fox and ABC are said to fare “slightly better” in the diversity sweepstakes, but both shows have Black stars embedded in a cast that is mainly White: a Black actress plays one of three main characters in ABC’s revamp of Charilie’s Angels and a Black actress has a starring role in Fox’s “Terra Nova“ but the other two stars are White and get top billing.

A modest proposal for the FCC: Mandate that all Whites watch shows like Undercovers for at least one hour per week or else lose their access to cable TV.

Blacks are the same way, but of course no one frets over that. A 2004 study found that Black adolescent girls had “strong preferences for Black television programming and characters that looked like them and had lifestyles they admired” (see here).

As bad as these shows doubtless are from the standpoint of White identity, the behavior of White audiences shows an implicit sense of Whiteness. White audiences don’t want to watch TV shows where Whites are nothing but marginal characters (even if, as is often the case, the portrayals of Whites are negative or present Whites as enthusiastic cheerleaders for a non-White world). I suppose there is some consolation in that.

Indeed, one wonders if shows modeled on successful Black-dominated shows of the 1980s and 1990s, like The Cosby Show or The Fresh Prince of Bel Air, could be successful now. I rather doubt that White America would buy into saccharine shows that create an idealized, counter-stereotypical world of successful, intelligent Blacks with great family values. Even in the age of Obama, there’s too much water under the bridge for that.