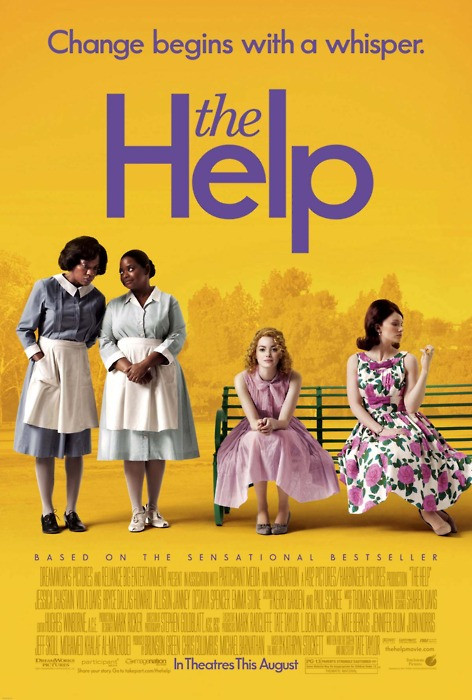 “Looking after White babies, that’s what I do,”  answers Abileen, the long-suffering Black heroine of  The Help when asked by Skeeter, the courageous budding journalist from the right side of the tracks, how it feels to raise someone else’s children while leaving your own at home.  And we’re off to another two hours treat from Hollywood on one of its two favorite themes, the suffering of Black folks.  You know the other one.

White boys, move over, because when it comes to vicious racism, pettiness, cruelty, and all over mean-spiritedness, you ain’t got nothin’ on your women.   And this is theme of The Help. When it comes to obsessing on the evils of racism in the South, no effort is ever spared in Hollywood and certainly not in this joint effort of Blacks, Jews and self-loathing liberals.

The Junior League set depicted in this movie about Black maids in Mississippi in the early 60s are uniformly despicable.  They are shallow, vain, lazy, as well as largely dim-witted and completely petty. Their brittle little personalities are acted out with malicious delight.     They play bridge and order the Blacks around.  And that’s all they do.

Thank God we have Hollywood to teach us the evils of racial stereotyping.

They squeal with delight over knowing jokes at the expense of the poor little poor girl who happened to have married one of “their men.” The character of Celia Foote is so over-acted it’s almost painful to watch.  She is pathetic in her over-the-top efforts to gain either the love of her husband or be invited to bridge.  Her maid Minny is wise, warm, and wonderful; in other words, she’s Black.  And, of course, it takes Minny the Wise to point out to her that it is because she is “poor White trash” that she is routinely rejected by the Junior League, evidently something Celia can’t figure out on her own.  But then you know, them little White gals ain’t so smart.   And it also takes Minnie to feed her so she’ll stop miscarrying one child after another.

And who is it that trots out an endless parade of oversexed and underfed baby starlets—the underlying reason for the anorexia of so many girls in our society? It’s the fashion industry, an outgrowth of the garment trade in New York, run by, which other poor oppressed minority is it?  Oh but Lord, am I being petty?

So how does it feel to toss your baby into the hands of the help?  It’s a question I need to ask my White liberal friends who work for the World Bank and hire Haitians to raise their children while pursuing a career seeking economic equality for the Third World, the politically correct choice over marriage.  Painful, no doubt.

And I do want to ask another liberal friend if she just isn’t a tad uncomfortable hiring an “Hispanic “ to clean her house.  I think we all understand that Hispanics are the “non-racist liberal’s” race of choice when it comes to cleaning the place up.  Wouldn’t it be better to hire a White woman in the interests of appearing non-racist?

Skeeter the Sincere is the only decent White person in the movie—except for Mom, who comes around at the end.  She sends her material—the stories told to her by the Black maids of Jackson, Mississippi to an editor in New York named Stein, no surprises there.  I do recall the story of a would-be liberal appointee to the Cabinet, a nice Jewish lady, who had to withdraw after it was discovered that she had hired illegal immigrants and not paid their Social Security. I’d love to hear the stories of Hispanic maids in Beverly Hills, Palm Beach, and the Hamptons. But that’s a movie that won’t be made.

Hilly the Horrible is the meanest of the mean.  She’s the one who proposes in her genteel little Southern voice, the Home Health Sanitation Initiative, which would require every home to have a separate bathroom for the help because they have “different diseases than we do.”  Oh those Southern Whites, ain’t they jus’ somethin’?

And thank God we have Hollywood to point that out.

Here’s another story that won’t get the Hollywood treatment. It’s the story of Khaled, who worked ten hours a day for the Israeli settlements in Gaza before the “disengagement.”        His meager income, a third of the minimum wage in Israel, had to support 20 people in his extended family, after his own home had been bulldozed by the Israelis.

“The settlers treat us like animals … We are watched all the time,” Khaled says, “and we are not allowed to speak.”  He has to ask permission to go to the restroom and eats lunch where he sits.  If he is ill he is not allowed to leave; the checkpoint only opens to allow workers in and out . . .

Khaled is hired on a daily basis so work is never guaranteed. “Sometimes the checkpoint is closed for weeks and then we receive no wages.”

As a matter of fact, I think Khaled would find singing and cracking jokes at the expense of his dim-witted employers kind of fun compared to what he’s used to.  And imagine what a luxury having his own toilet would be! Wouldn’t you just love to see the settlers eating Khaled’s shit? Like in this clip where a maid in The Help gets her employer to do just that–to the great amusement of another White woman in the scene (and presumably all those liberals in the audience).

The reviews of The Help, even the critical ones, were favorable (with the notable exception of our own James Edwards’).  After all, no one would dare be negative about the central religion of multicultural America. Actually one critic spotted the central absurdity:

In the end everyone fits neatly into the film’s view of a world filled with racists and nitwits on one hand, and courageous, color-blind strivers on the other.

The rest of his review is tepid.  Not a good career move to get too far off the reservation.

How Hollywood loves to hate the South!  I can honestly say I’ve never seen a depiction of a Southerner ground out by the Hollywood movie machine that wasn’t blatantly insulting.  Vicious racists, slick womanizers, sanctimonious-out-of-touch reactionaries, moronic hillbillies, hypocritical preachers, greedy oil men—each one more repulsive than the last.

Where would we be without Hollywood’s unique gifts of insight into the failings of others?  Why frankly, I just can’t imagine.

The Help was brought to us by Dreamworks, founded by Hollywood super producer Steven Spielberg. I don’t doubt for a minute that Spielberg is at home Hoovering the Orientals and sprucing up the silver in his 20,000 foot mansion as I pen this.   I just know he wouldn’t stand for the exploitation of another human being, most particularly not another oppressed minority like himself.

Misrepresenting the past is one thing, but being completely oblivious of what goes on in front of you is another.  The New World Order, or whatever your pet name is for the emerging global economic regime derives its staggering wealth on, well, what else could you call it, but slavery.   Skeeter, who wants us to hear the perspective of Black domestics in the South might want to travel to China, Vietnam, the Philippines, Peru or some other Third World plantation and talk to The Help.  And if her funds are a little tight — and we all know money’s a little tight these days — she could just stay home and walk over to McDonald’s, Wendy’s, Kmart, etc. and talk to The Help.

And one last thing before I wrap this thing up, and that’s this.  One of the subplots is this;  it is at last revealed that Skeeter’s mother fired their beloved Constantine after 29 years of loyal service and never told Skeeter the truth.  And worse yet, when she sent Skeeter’s brother to fetch her back from Chicago, Constantine had already died, broken hearted and alone.

I have another story.  My mother was raised with a Black girl in the house.  They remained life-long friends.  Ginsie worked for my family through the next generation, when she worked for my uncle’s family.  And no, she wasn’t handed down in the Will.     She had her own free will and plenty of it.  She could have been a kindergarten school teacher but chose instead to work as a domestic.  In between stints with the Holders, she worked as the dining room manager at my grandmother’s women’s club.  She took pride in her work and enjoyed her life.

She and my mother were both funny women.  I remember listening to their voices after they’d have a double and laugh by the hour remembering the old days.   There was no rancor and no hatred, only genuine humor and affection.  But if your Bible is brought to you by Hollywood, you’ll never believe such a thing was possible.