A reader sent along this video of Jeb Corliss, an extreme athlete, flying through the Alps.

Here’s extreme surfer Laird Hamilton surfing waves so big that he has to be towed into the path of the wave.

Corliss and Hamilton are White, and being White seems to be part of a pattern for extreme athletes. The reader also sent a link for Revolt of the White Athlete: Race, Media, and the Emergence of  Extreme Athletes in Amerca (2007), an academic book on the phenomenon which is predictably bogged down with words like ‘interrogate’ (as in “interrogating the racial, gender, and nationalistic aspects of Generation X discourse) and using ‘privilege’ as a verb (as in a complaint about a scholar who [Gasp!] “implicitly privileged the contributions, perspectives and interests of white men over and against all others”).

The author is Kyle Kusz who was rewarded for his efforts by being nominated for the Multicultural Center Diversity Award at the University of Rhode Island where he teaches. Kusz notes that he was inspired to enter the field of cultural aspects of sports by taking a sport sociology class taught by Dr. Stephen Mosher at Ithaca college.

What we have here is a clear case of implicit Whiteness, but of course Kusz takes a typical cultural Marxist attitude towards his subject.

Extreme athletics is where “white everymen perform supra-normal athletic feats in high-risk sporting activities like BASE jumping and sky surfing. Extreme sports are also portrayed as sporting activities which have revived a sense of traditional American masculine values and pursuits: rugged individualism, conquering new frontiers, and achieving individual progress” (p. 63). Predictably, for Kusz, engaging in such sports by Whites is the politics of backlash and resentment that “attempt to deny the racialized privileges of whites while masking (and thus ensuring the reproduction of) asymmetrical relations of power in the present. [They are also an attempt] to reverse the minimal gains made by historically marginalized groups since the 1960s” (p. 69). 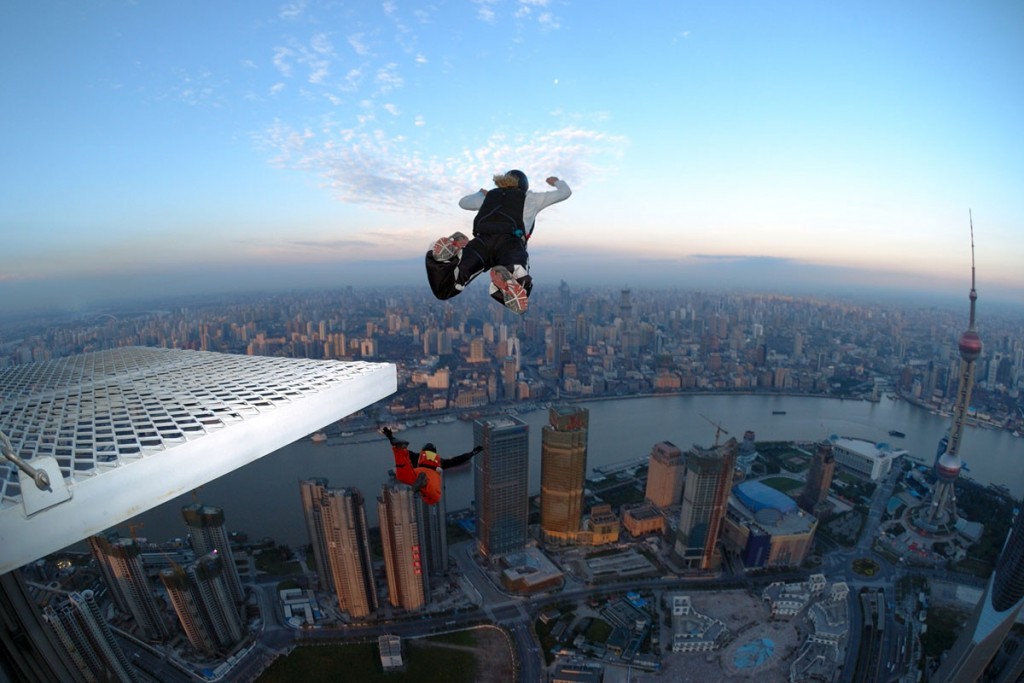 BASE jumper jumping off a building

Kusz therefore is upset not just because White guys do these things when they ought to be celebrating diversity in their sporting activities by only doing activities that non-Whites enjoy as well.  The problem for Kusz is that extreme sports is seen as embodying evil traditional American values of individualism and conquering the frontier with heroic acts of courage. (One might make the same analysis of NASCAR racing [see here, p. 20 ff).  This is bad because it implicitly de-emphasizes the contributions of non-Whites—“a cleverly disguised version of the contemporary reactionary populist rhetoric about traditional values and the nation which re-secures and privileges the articulation of white masculinity with America” (p. 71).  This may seem “innocent and non-political,” but it coincides with phenomena like Rush Limbaugh (!) and “the rise in white supremacist movements.”

Extreme athletes exist in an implicitly White world where they associate only with other White men—“a racially and gender exclusive place” where White men “can un-apologetically perform an ideal masculinity which they cover by taking death-defying risks, enduring the pain of participation and displaying an unwavering confidence and coolness in the face of apparent danger.” By assigning merit to these activities, “these white males are portrayed as extraordinary and exceptional individuals who are different from, and superior to, anyone not willing to attempt such potentially dangerous athletic exploits” (p. 72).

Kusz the cultural Marxist is not burdened with having to actually prove his assertions about the evil that lurks in the hearts of all those White extreme athletes. The important thing is to use the right verbiage—what passes for brilliance, or at least competence in the academic culture of the left these days.

Thinking about the phenomenon reminded me of Ricardo Duchesne’s The Uniqueness of Western Civilization—a book I strongly recommend (and review at length in the forthcoming Fall issue of The Occidental Quarterly). Duchesne proposes that this daring, high-risk behavior is fundamental to understanding the uniqueness of the West. He describes the Indo-European founders of the West as heroic warriors striving for individual fame and recognition, often with a “berserker” style of warfare — i.e., frenzied, foolhardy intensity. Duchesne argues that the goal is to gain fame by social recognition of individual heroic and dangerous exploits. For example:

It was the vigor, boldness, and the acquisitiveness of Germanic war-bands that kept the West alive [after the decline of the Western Roman Empire]. These lads were uncouth and unlettered, much given to quarrelsome rages, but they injected energy, daring, and indeed an uncomplicated and sincere love of freedom, a keen sense of honor and a restless passion for battle, adventure, and life. (p. 465).

As we must all expect to leave
our life on this earth, we must earn some renown,
If we can before death; daring is the thing
for a fighting man to be remembered by. …
A man must act so
when he means in a fight to frame himself
a long lasting glory; it is not life he thinks of.

In this analysis, White men jumping off buildings and sky surfing are reenacting a fundamental script of Western culture—the same script that underlies Western energy, inventiveness, exploration and creativity. While I argue that this berserker military ethos of daring and adventure is  not the whole story of Western individualism (there are also the morally constructed egalitarian ingroups that feed into today’s stifling political correctness; see here, p. 23ff),  I think Duchesne has a key insight that explains the psychology of a great many White men and is likely a critically important aspect of the evolutionary psychology of the West.

And yes, Kusz is probably right that White men who engage in extreme sports think of themselves as “extraordinary and exceptional individuals who are different from, and superior to, anyone not willing to attempt such potentially dangerous athletic exploits.” Nothing wrong with that. As we head into the multicultural deathtrap of the future, it is critical that such men develop an explicit sense of their White identity and interests and that they redirect their sense of physical daring and adventure to lead their people in the struggles that lie ahead.