In my recent blog “Jews and the Occupy Wall St. Protests” I mentioned that popular Los Angeles-area radio talk host Bill Handel said he wasn’t upset with Wall St. because “my tribe controls Wall St.” Handel is happily continuing his lucrative career without any problems at all. But Patricia McAlister, a Black substitute teacher in the LA school system has been fired for saying that the  “Zionist Jews who run these big banks and the Federal Reserve … need to be run out of this country.”

Granted, McAlister went quite a bit beyond Handel in advocating that Jews be expelled, but I rather doubt that that is the issue. Simply pointing to Jews in the context of the financial meltdown would have been quite enough. Indeed, there has been quite a bit of comment about lone protesters like David Smith, a regular at the New York protest, who has gotten quite a bit of attention for his signs, including “Google: Zionist Jews control Wall St.” 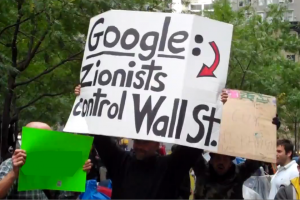 JTA Caption: An Occupy Wall Street protester who says his name is David Smith holding aloft a sign in Zuccotti Park in New York that offers an overtly anti-Jewish message, Oct. 11, 2011. Protest organizers say his type is a fringe element of the movement. (neolibertariannet via YouTube)

The situation is similar to what happened during the first stages of the meltdown in 2008 when the ADL expressed concern about the “dramatic upsurge” in anti-Jewish messages on internet discussion boards devoted to finance and the economy in reaction to the huge bailout of Wall Street. The ADL press release was predictable in its attempt to characterize such outbursts as irrational hatred against Jews: Abe Foxman complains darkly that in times of economic downturns, “The age-old canards [the ADL’s favorite word is ‘canard’] about Jews and money are always just beneath the surface.”

The issue of Jewish involvement in the fraud that caused the meltdown (and I use the work ‘fraud’ advisedly; see the current TOO video, with Dylan Ratigan interviewing David DeGraw of OWS and Prof. William Black of the University of Missouri-Kansas City) has recently surfaced in the Jewish media (“Jewish activists try to fight Wall Street — and some protesters’ anti-Semitism,”JTA, Oct. 19, 2011). The JTA article points to

an undercurrent of anti-Semitism that runs through some of those protesting at the Occupy Wall Street gatherings across the United States.

While movement organizers and sympathizers are quick to argue that such protesters are a fringe element, they are a reminder of the small proportion of Americans that still clings to the canard that Jews control the nation’s money. According to the Anti-Defamation League, 16 percent of Americans hold anti-Semitic beliefs about Jewish control of the banking system.

16% is a substantial percentage. If the 16% were visibly represented at the OWS events, they would take on quite a different color. Meanwhile, mainstream conservatives have seen this as an opportunity to vilify the entire movement, presumably because of its generally leftist atmosphere:

Radio personality Rush Limbaugh said the protesters’ rants against bankers and Wall Street were coded references to Jews. Similarly, Washington Post columnist Jennifer Rubin accused politicians and the media of hypocrisy for a lack of coverage of the anti-Semitic content compared to coverage of racism at Tea Party events.

But detractors say the anti-Semitism is not just a fringe element. Among other things, they cite support for the protests by the Canadian magazine Adbusters, which was widely condemned for a 2004 story that focused on the influence of Jewish neoconservatives in drumming up support for the Iraq war and featured a list of 50 neoconservatives with asterisks next to the names of the Jews. In 2010, the magazine published a story comparing the Gaza Strip to the Warsaw Ghetto.

Adbusters may have been widely condemned, but it was surely right to emphasize the Jews who were involved in promoting the Iraq war. People are simply not paying attention or engaging in self-deception if they fail to accept the critical role of the Israel Lobby, the Israeli government, and strongly identified American Jews with close family and personal ties to the Israeli right and ensconced in high positions in the American government (Mearsheimer and Walt; Steve Sniegoski; my version; there are many others).

The JTA wording shows once again that actual data on Jewish power and influence are completely irrelevant to Jewish activists. Similarly, Alana Goodman, writing for Commentary, is concerned about the involvement of Adbusters, referring to its article naming Jewish neocons: Adbusters “peddled some of the more feverish theories about American Jews, neoconservatism, and the Bush administration.” (See also Charlie Wolf’s blog in the Mail Online, “Organizer Behind “Occupy Wall Street” Has History of Anti-Jewish Writing.”)

For anything except Nobel prize winners, Jewish identity is completely irrelevant.

Obviously, we should certainly not be cowed by Jewish denials from independently investigating the role of Jews in the financial meltdown. In fact, the reflexive denials by Jewish activists reinforce the general impression that the mainstream Jewish community will never engage in a dispassionate, rational discussion of Jewish influence.

Admittedly, the case for Jewish involvement in financial misbehavior is different from situations, such as promoting the Iraq war and the intellectual and political movements discussed in The Culture of Critique, where strongly identified Jews are pursuing specific Jewish interests. Nevertheless, I have presented the case that Jewish economic behavior does indeed reflect historic patterns, including the acceptance of white collar criminals in the Jewish community, concluding that

the problem for [Michael] Kinsley and like-minded people is trying to seriously rebut the claim that the socially destructive behavior of the  predominantly Jewish financial elite does in fact fit a strong historic pattern of Jewish ethical behavior vis á vis the non-Jewish society — behavior that is well grounded in Jewish religious ethics.

Con artists have a word for the inability of their victims to accept that they’ve been scammed. They call it the “True Believer Syndrome.” That’s sort of where we are, in a state of nagging disbelief about the real problem on Wall Street. It isn’t so much that we have inadequate rules or incompetent regulators, although both of these things are certainly true. The real problem is that it doesn’t matter what regulations are in place if the people running the economy are rip-off artists. The system assumes a certain minimum level of ethical behavior and civic instinct over and above what is spelled out by the regulations. If those ethics are absent — well, this thing isn’t going to work, no matter what we do. Sure, mugging old ladies is against the law, but it’s also easy. To prevent it, we depend, for the most part, not on cops but on people making the conscious decision not to do it. (“The Wall Street Bailout Hustle,” Feb. 17, 2010)

It’s that civic sense and minimum level of ethical behavior that I think has been lost. And yes, I do think it has something to do with the high level of Jewish involvement in the financial industry.

But honest discussions of this issue will be intensely resisted by activist Jews—just as in the case of the role of Jewish neoconservatives, the Israel Lobby and Jewish activist organizations (who have actively policed any murmurs of Jewish involvement) in promoting the war in Iraq. Or Jewish domination of the media in the U.S. and how that shapes perceptions of issues important to Jews (see here, p. 48ff). It’s an old story—the mainstream Jewish community has steadfastly resisted any suggestion that Jewish behavior is relevant to negative attitudes about Jews throughout history. Given this track record, one certainly cannot depend on the Jewish community to provide an accurate, unbiased portrayal of the actions of the responsibility of Jews in the financial meltdown.