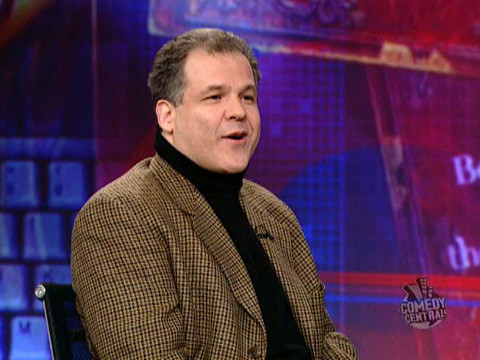 At TOO we often use the phrase “hostile elite” to describe our new, predominantly Jewish elite that has become ensconced in all the media high ground in America. Examples are legion, but it is hard to imagine a more blatant recent example of fear and loathing of White America than Lee Siegel’s “What’s race got to do with it?” (Well, maybe Rabbi Hammerman’s outburst against Tim Tebow comes close.) Published in the most mainstream of the mainstream media, the New York Times, Siegel is horrified by Romney’s Whiteness:

The simple, impolitely stated fact is that Mitt Romney is the whitest white man to run for president in recent memory. Of course, I’m not talking about a strict count of melanin density. I’m referring to the countless subtle and not-so-subtle ways he telegraphs to a certain type of voter that he is the cultural alternative to America’s first black president. It is a whiteness grounded in a retro vision of the country, one of white picket fences and stay-at-home moms and fathers unashamed of working hard for corporate America.

Romney reminds Siegel of the bad old 1950s when White people like Romney ran the country and supported Joe McCarthy, worked hard and had lots of babies. The new elite hates the old America with a passion. Here’s the photo accompanying Siegel’s piece: 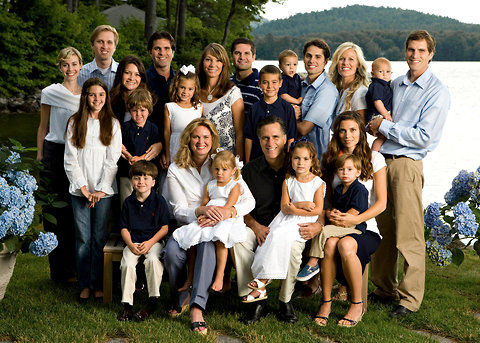 NYTimes caption: Mitt Romney, a Republican presidential candidate, with his extended family in 2007.

Way too many White people. Good looking, healthy, rich White people. It’s enough to make a Jewish writer think pogroms and expulsions. Siegel longs for the day when the power of Whites is way less than it is now–when Whites don’t have the clout to matter much in presidential elections.

White America is retro. Obama is the personification of the new America. And the only trait that matters is that he is non-White.

On the other hand, retro America is racist to the core, and Romney’s Mormons  are a “bastion of pre-civil-rights-America whiteness.”

Yes, since 1978 the church has allowed blacks to become priests [the link directs the reader to the LDS home page which features Jesus with non-White children]. But Mormonism is still imagined by its adherents as a religion founded by whites, for whites, rooted in a millenarian vision of an America destined to fulfill a white God’s plans for earth.

Sort of like Judaism as imagined by its adherents: founded by Jews, for Jews, and rooted in a millenarian vision of America and the rest of the world as destined to fulfill a Jewish G-d’s plans for His favorite (Chosen) people.

Siegel hates everything White, down to clean shirts. To be authentically White is to be overly clean, robotic, insincere, bland, sentimentally patriotic, and living in the time warp of small-town America—the bogeyman of two generations of Jewish intellectuals—and to believe that the Founding Fathers (those dead White guys who established the hopelessly evil White America before it was redefined by our hostile elite) may have had some good ideas that should inform how we do things in the contemporary US:

Mr. Romney’s meticulously cultivated whiteness. He is nearly always in immaculate white shirt sleeves. He is implacably polite, tossing off phrases like “oh gosh” with Stepford bonhomie. He has mastered Benjamin Franklin’s honesty as the “best policy”: a practiced insincerity, an instant sunniness that, though evidently inauthentic, provides a bland bass note that keeps everyone calm. This is the bygone world of Babbitt, of small-town Rotarians.

Mr. Romney does not merely use the past as an inspirational reference point, as the other candidates often do. He conjures it as a total social, cultural and political experience that must be resurrected and reinhabited. He speaks of the founding fathers and the Declaration of Independence as phases of national creativity that we are destined to live through again. He frequently accompanies his recitative with verses from “America the Beautiful.”

Siegel as exemplar of the new hostile elite still fears the old America. But despite all the best efforts of Siegel and his ilk, he understands that the beast has not been slain–yet. He claims that had it not been for the economic calamity that occurred right before the 2008 election, McCain would have been president (probably true). And it could happen again:

Whether he means to or not, Mr. Romney connects with a central evangelic fantasy [nothing terrifies serious Jews quite like serious Christians]: that the Barack Obama years, far from being the way forward, are in fact a historical aberration, a tear in the white space-time continuum. And let’s be clear: Mr. Obama’s election was not destiny, but a fluke. …

[Romney is] the white solution to the problem of a black president. I am sure that Mr. Romney is not a racist. But I am also sure that, for the many Americans who find the thought of a black president unbearable, he is an ideal candidate. For these sudden outsiders, Mitt Romney is the conventional man with the outsider faith — an apocalyptic pragmatist — who will wrest the country back from the unconventional man with the intolerable outsider color.

I do think there is a lot of implicit Whiteness going on in this campaign, but the most noticeable thing so far is the lack of enthusiasm for Romney among the Republican base. Indeed, in a previous blog, I wrote

I also suspect that the lack of enthusiasm Republicans have with Mitt Romney is precisely because they don’t sense that he is an implicitly White candidate but rather someone who is finding the best way to get elected and who will then carry on the dissolution of White America under the banner of the Republican Party. (And the flag of Israel…)

Siegel is probably right that once Romney becomes the candidate, there will indeed be a great many Whites who see him as the White alternative to the candidate who is very much favored by the hostile elite. Nothing wrong with that. If only White voters voted for a White candidate the way Blacks (95%) or even Jews (83%) vote for Obama.

Not living in the New York-Hollywood culture machine, I was unfamiliar with Siegel. Looking him up on Wikipedia is revealing. Siegel’s page looks like it was written by his press agent, or better yet, by himself given that in the past he has apparently written glowing anonymous comments about his writing. The page features flattering comments by The New York Times Magazine  (“one of the most eloquent and acid-tongued critics in the country”) and The New York Times Book Review (his “drive-by brilliance”). There are also lavish compliments from other Jews, David Rieff and Janet Malcolm.  Siegel lives is at the very pinnacle of culture production, writing for the elite media (The New York Times, The New Republic, Harper’s Magazine, The Atlantic Monthly).

The terrifying thing is that in that world, his attitudes about White America are definitely an asset.