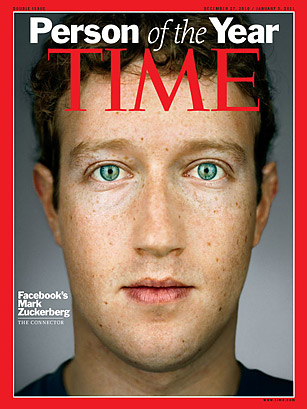 We’ve all heard the adage “He who pays the piper calls the tune.” Now let’s consider what that means in today’s America.

For starters, we know that Jews collectively have a lot of money. And I’ll bet that has sure increased in the years since Madoff and the 2008 banking crisis. I’ve previously argued that Jewish malfeasance with respect to money is a very old thing. And it’s no canard to make this argument. See my article “The Culture of Deceit,” as well as “Jews & Money” and ” The Smell of Money.” Mostly, however, see John Graham’s powerful writing on the topic on TOO’s pages.)

So one day last week when I opened my browser and checked the mainstream news to see what we proles were meant to ingest that day, I groaned when I read about Facebook going public. As one account noted,

The biggest beneficiary of a Facebook IPO, of course, would be founder Mark Zuckerberg. The 27-year-old native of White Plains, NY, founded Facebook in 2004 with a couple of Harvard buddies.

And how much did he benefit? The headlines told us that his share of the loot was — this is not a misprint — $28 billion, assuming a $100 billion valuation, which may be conservative. Folks, that is a lot of money, even in the era of trillion dollar deficits. Then there’s Dustin Moskowitz, whose Facebook shares are expected to be worth around $7.6 billion and Eduardo Saverin (who had to sue to get his piece of the pie) will be worth around $5 billion. All told, a notable increase in Jewish wealth. (Although he is often said to be Jewish, Peter Thiel, the venture capitalist whose $500,000 investment will turn into shares worth around $2 billion, is not Jewish.)

Now allow me to speculate a bit. First, I join other TOO writers in doubting that Zuckerberg really founded Facebook.  As Matt Parrot wrote of its origin, as presented in the film The Social Network:

The project was hijacked when the gullible Winklevoss twins entrusted Mark Zuckerberg and his accomplice, Eduardo Saverin, to help execute the project. (See also Kevin MacDonald’s review.) The movie adaptation of this true story is a fevered Jewish revenge fantasy against their hapless arch-enemies, the reviled WASP “insiders.” Both the book, by Ben Mezrich,  and the screenplay, by Aaron Sorkin,  wallow in defeating the earnest brothers, heaping these two iconic American Christians with humiliation after humiliation.

Whew, there are a lot of familiar themes there.

Now, I’m going to assert that the success of Zuckerberg and Facebook did not occur in a vacuum. I suspect that he had ample help and support from the wider Jewish community. If a dedicated team of researchers were to spend five years investigating everything about the rise of Facebook, I believe they would find instance after instance of support from Jewish lawyers and judges here, Jewish journalists there, Jewish politicians (and their lackeys) everywhere. It would amount to a full-court press. It would be the usual pattern of Jewish ethnic networking.

The whole thing brings to mind the old case of who won the patent for the invention of television. It’s pretty much the same story as Facebook: Philo Farnsworth invents it, but it ended up in the hands of David Sarnoff and RCA, thereby gaining not only immense wealth but massive social control.

And here’s where it gets weirder: the film The Social Network was written by Jewish playwright Aaron Sorkin (whose father was a copyright lawyer!). Back in the early part of this century, Sorkin himself had even written a play depicting the Jew Sarnoff as stealing the television patent from Philo Farnsworth. Originally meant as a screenplay, it was set to be produced by New Line Cinema but never came to fruition. Later, Sorkin converted it into a stage play by the name of The Farnsworth Invention, described in a press press release as follows:

“The Farnsworth Invention tells the story of Philo Farnsworth, a boy genius born in Beaver, Utah, who later moved to Rigby, Idaho, where he began experimenting with electricity. In 1920, when Farnsworth was 14, he showed his high school chemistry teacher a design he had made for an electronic television only to become involved in an all or nothing battle with David Sarnoff, the young president of RCA and America’s first communications mogul.” [Director Thomas] Schlamme described the movie as “a classic American tale driven by the conflict between a Mormon farmer and a Russian [sic] immigrant over the ownership of the most influential invention of the 20th Century.”

Next, I’m going to assert that Zuckerberg will support the usual Jewish causes following the dictum “whatever’s good for the Jews.” So far, however, that doesn’t seem to be the case, as he tossed off $100 million “to improve the long-troubled public schools in Newark.” That means he’s currently following the hip but largely hopeless trend to donate to African American welfare.

Also, traditional Jews might not be happy with his dating habits, as his girlfriend is decidedly not Jewish: 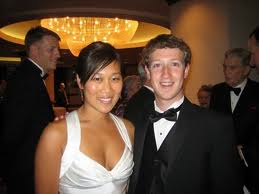 Zuckerberg is still young, though. Keep an eye on him as he ages. He may well begin to steer some of that immense wealth into causes favorable to Jews, including those such as open borders immigration into traditionally White countries.

Returning to my original point about the political power of money, let me relate a story told by anti-Zionist Israeli Gilad Atzmon. He wrote about an elite Quaker school in Manhattan that may have a Jewish enrollment approaching 40%. But their Quaker values are not consistent with Jewish values:

The Zionist parents . . . are now insisting that the school give up on its Quaker principles and start to operate as a Yeshiva. They openly lobby against tolerance,  freedom of expression and relentlessly suppress freedom of speech. As we always knew — in the ‘land of the free,’ money can buy everything.

In fact, what we see here is a microcosm of the Zionification of America. Once Zionist money changes hands, tribal indoctrination will soon follow. The Wall Street Journal confirmed this week that some parents “vowed to pull their applications in protest” unless their demands are met.  The message to the Quaker seminary was clear – surrender or face financial extinction.

The Quaker Seminary is facing a serious challenge here. It has to decide whether to stand up for its precious principles or surrender to mammon seeking and face total moral bankruptcy. Interestingly enough, America faces the exact same dilemma. It has to choose between a fight for freedom or total surrender to a foreign materialist ideology conveyed by AIPAC, ADL and other Zionist warmongers.

I wish America and the Friends Seminary’s Quakers lots of luck, because in this battle we are all together. We’re all Palestinians seeking liberation.

As I once wrote, “The topic of Jews and money is forever important.” You can take that to the bank.