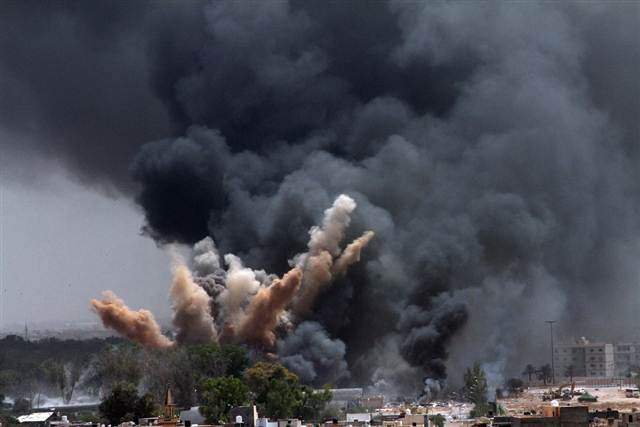 This article appeared on Feb. 06, 2012 in the Swiss online journal Alles Schall und Rauch and was written by Freeman.

Like all illegal wars exclusively pulled off by NATO, the one against Libya has triggered mass murder. Reports from human rights organizations show that the United States, NATO and their vassal “rebels” committed the worst possible war crimes, culminating in the cold-blooded murder of Muammar Qaddafi. Interviews conducted with victims and witnesses in Tripoli, Zawiya, Sibrata, Khoms, Zliten, Misrata and Sirte Tawergha give ample proof that NATO deliberately bombed civilian targets, causing numerous deaths and injuries. This included schools, hospitals, government buildings, food stores and homes. The rebels meanwhile indulged in systematic torture, abuse and revenge killings among Gaddafi sympathizers, while “Black” immigrants were literally butchered.

But the Western media and official war mongers maintain a total silence about these facts since they do not fit into their hypocritical justification for the war, particularly the transparent lie that it was waged for the protection of civilian populations. It is estimated that at least 60,000 people were killed by the NATO attacks while many more were wounded. NATO admits to having carried out in six months some 26,000 missions with 9,600 attacks during which thousands of tons of bombs were dropped.

According to an official investigation the most barbarous acts were committed by the rebels since the end of fighting. Prisoners have been beaten, tortured and executed en masse. The rebels went from house to house and arrested all the men whom they regarded as enemies. There are witness statements that pro-Gaddafi fighters had their fingernails ripped out before their throats were cut.

The human rights group Human Rights Watch (HRW) has accused Libyan rebels to have tortured and killed the former Ambassador to France, Omar Brebesch. After his arrest on 19, January in Tripoli, the body of the 62-year-old was located the following day in the hospital of Sintan some 100 kilometers away. A preliminary investigation showed broken ribs, cuts and torn toenails.

Last week the human rights organization Amnesty International and the aid organization Doctors Without Borders reported that torture and ill-treatment is widespread among military and security forces and armed rebels who run prisons. For which NATO is responsible since it has brought this band of criminals into power.

The worst thing happened to Black people, no matter if migrants or native Libyans. 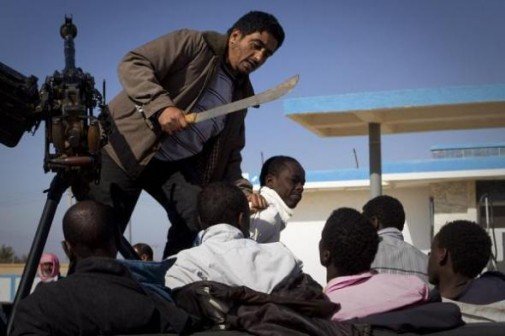 … and thrown into mass graves by the hundreds. 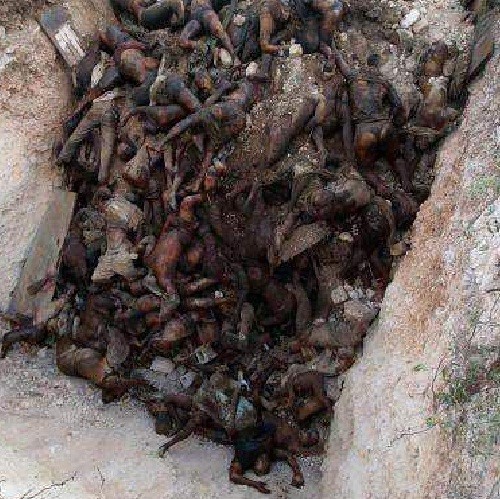 It’s always the same colonial powers like the U.S., UK and France and its NATO accomplices who perform one war of conquest after another. Under the pretext of UN Resolution 1973, which merely meant to enforce a “no-fly zone” and an arms embargo—both allegedly to protect the Libyans from Muammar Gaddafi—the presnt assault was staged as a ruthless act of aerial warfare, coordinated with murderous rebels on the ground.

Immediately after the fall of Mubarak in Egypt, NATO’s  “opposition” forces in Libya and the Gulf States were trained by Allied soldiers, supplied with weapons and military know-how. Particularly the puppet government of Qatar and its military leadership now boasts brazenly that without their massive support, the rebels would have never won. Qatar hosts the headquarters of the U.S. armed forces in the Middle East and serves as a “proxy” for the Pentagon.

The same “game” is now repeated in Syria. Again there are foreign forces at work, causing targeted attacks and murderous raids, all to be used as an excuse for military intervention by NATO. Lybian rebels have even been assigned directly to Syria where the West wants to stage the next fall of an unpopular government. As always, this is accompanied by the worst Western media propaganda against Syria, and the do-gooders are always dumb enough to believe it. Yes, it is all about human rights and democracy and similar bullshit.

As usual, our media points the finger in the wrong direction. The whole time they accuse Assad as being guilty of the violence. Yet the truth is that it is primarily committed by groups supported by foreign countries. The Syrian government is victim instead of perpetrator and only defends itself against a foreign-led terror. But what can we expect from our media whores except a distortion of the facts as usual.

According to a report of the Arab League, an international “armed entity,” including the “Free Syria Army,” is responsible for the terrorist attacks. Observer missions in Homs, Hama and Idlib observed attacks against government troops and civilians which have resulted in numerous deaths and injuries. Buses with civilians were blown up, as well as a freight train transporting fuel, a police van, a pipeline and road bridges.

NATO planes land day and night at Turkey’s military base of Iskenderum near the Syrian border, unloading weapons and experienced fighters from Libya. Iskenderum is also the headquarters of the “Free Syria Army.” French and British special forces train Syrian rebels, while the CIA supplies them with electronics and information about troop movements of the Syrian army and attack targets. The Turkish Foreign Minister Ahmet Davitoglu has admitted that his country was ready to invade Syria as soon as the consent of the Western Allies would be given.

The only hope of preventing an open war against Syria are China and Russia and their veto in the UN Security Council. We have learned what NATO meant by “protection of the civilian population.” Because what has taken place in Libya is a counter-revolution of the global elite which has turned back the clock by 43 years. It wants to turn the country again into a Western colony as it was under King Idris who donated the country’s resources to the American and British oil companies and allowed foreign military bases, a situation that ended when Gaddafi came to power. The influence of Russia and China is now limited, because Gaddafi had signed investment and oil supply agreements with both countries.

We are witnessing the rape of Libya by the West, the funeral of the Revolution which served the working class and could be seen, within the limits of a strictly Islamic mentality, as a role model for other countries in Africa as well. The oil wealth served the Libyan population as well, but not anymore.

The NATO war is only the beginning of the destruction of Libya, where now a brutal civil war is being waged. The various rebel factions are fighting against each other or against remnants of Gaddafi loyalists. An “Iraqi” situation is the result, with a destroyed infrastructure and a lack food, water etc.; of course it is the civilian population that suffers terribly.

But the real criminals in this whole drama are the opinion leaders, the intellectuals, the academics and the many do-gooders who eagerly parroted the lies of politicians in Washington, Paris and London about human rights and thus gave the green light for the war. Because it is always the same so-called pillars of Western society who are enabling the wars, finding a suitable excuse and justification for every crime.

And what do you hear from the UN war crimes tribunal in The Hague? Nothing, except a loud silence. Because genocide is committed only by the “others”, and certainly not by the “civilized” West.

It makes you vomit, doesn’t it?