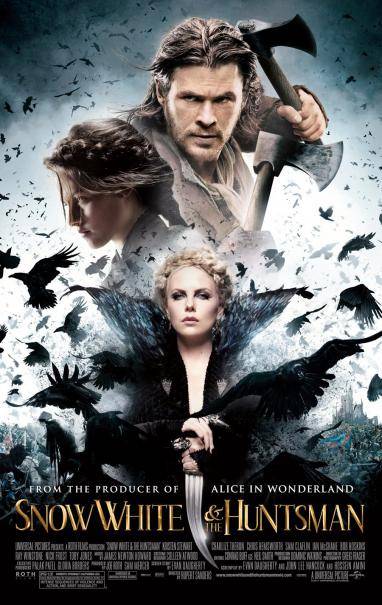 I realize that if a studio is going to spend $170 million on a movie, they are going to do their best to appeal to a wide audience. Movies with mass appeal necessarily have emotional hooks that draw the audience in. In Snow White, there are two such hooks.

One hook is the image of idealistic romantic love completely divorced from sex. We first see the huntsman grieving for his dead wife. He helps Snow White because of the promise of reward and later because he realizes that she can be the key to defeating the evil Ravenna, a sorceress who has usurped Snow White’s rightful position as queen and whose reign has completely devastated the  kingdom. But there is an obvious romantic tension, as the huntsman, who is personification of a Viking warrior, protects Snow White and teaches her how to fend for herself. (The huntsman is played by  Chris Hemsworth, who starred as the Viking god/warrior Thor in the movie Thor.) 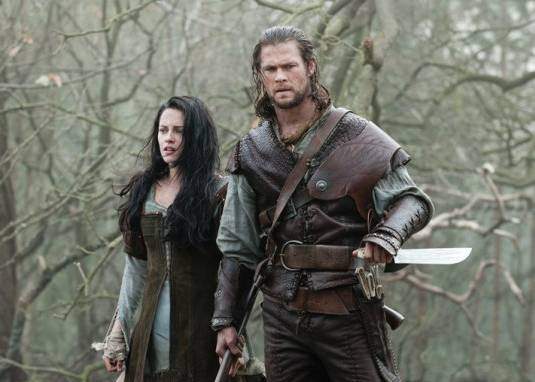 Chris Hemsworth as the huntsman, with Kristen Stewart as Snow White

The Huntsman maintains vigil over Snow White. He speaks to her about his wife, Sarah, whom he met after the war and how she changed him into a better man. He tells her how he loved her and the guilt he felt when he let her out of his sight, losing her forever. After her death he became himself again, a self that he didn’t much care for, and was lost until he met Snow White. The Huntsman confesses that she reminds him of his wife, that she too has the same heart and spirit and since meeting her notices his change into the man he once was long ago. He apologizes to Snow White for failing her and tells her she deserved better. Before departing, the Huntsman kisses Snow White. After he leaves, Snow White awakes from death and with a revelation. She addresses the Duke and his army, stirring the men into battle and confiding in them that she alone possesses the power to kill the Queen. That night they prepare to do battle the following morning with the Queen and her army.

There is no hint that the victorious Snow White will marry the huntsman. She will probably marry the prince, but that is left to the sequel. So the love between Snow White and the huntsman is a completely pure and chaste love; the huntsman still mourns for his dead wife. It’s the stuff of fairy tales, but it is doubtless a large part of the psychological appeal of the movie, especially for women.

This emphasis on pure romantic love divorced from sex recalls a theme from the chapter on psychoanalysis in The Culture of Critique—the psychoanalytic view that romantic love was merely a sublimation of sexual urges:

[John Murray] Cuddihy (The Ordeal of Civility: Freud, Marx, Levi-Strauss, and the Jewish Struggle with Modernity. New York: Basic Books, 1974, 71) traces Freud’s views in this matter to the fact that for Jews, marriage was completely utilitarian. A disciple of Freud, Theodore Reik stated that the older generation of Jews held the conviction that “love is to be found only in novels and plays.” “Love or romance had no place in the Judengasse [Jewish quarter].” Love was therefore viewed by Freud as an invention of the alien … culture and thus morally suspect. Its true hypocritical nature as a veneer for and really only a sublimation of the sexual instinct would be unmasked by psychoanalysis. … It was a devastating analysis—an analysis with important consequences for the social fabric of Western societies in the late twentieth century. (See here, p. 125)

Movies like Snow White show that despite the psychoanalytic war on romantic love, it is alive and well, doubtless because love and sex are indeed two quite different psychological adaptations. Although romantic love  is a cross-cultural universal even in societies where kinship relationships and property predominate in choice of marriage partner, it is uniquely elaborated in Western societies as a basis for individualist choice of marriage partner (see here, p. 65ff).

The other emotional hook is the fight of good against evil, where good is the  survival and  prosperity of the ingroup. The evil Queen is a usurper whose reign has resulted in poverty and misery for everyone. The people are under alien rule, their fight is just. It is a moral imperative, just as in The Lord of the  Rings. Indeed, Tolkein’s work was an inspiration for the main screenwriter, Evan Dougherty:

It’s well known that the Lord of the Rings trilogy resulted in a moral panic among some because of its depictions of good White people trying to save themselves and their culture against the forces of darkness. Indeed, Stephen Shapiro, says that “Tolkien’s good guys are white and the bad guys are black, slant-eyed, unattractive, inarticulate and a psychologically undeveloped horde.” There is a long line of critics of Tolkein who see strong overtones of White racialism in his stories (see discussion here). 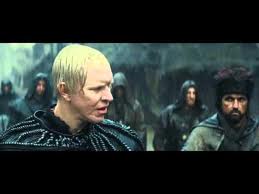 In Snow White, the good White, bad non-White theme is underplayed but still there. The evil Queen, played by the beautiful Charlize Theron, is blond, and Finn, her brother, appears almost as an albino. But the evil Queen commands the Dark Army, ” an army of invincible glass soldiers who have enslaved several of the neighboring kingdoms” and who are entirely black, from head to toe. The only Black actor in the film is a soldier in Finn’s war party charged with bringing Snow White back  into the clutches of the evil Queen who would eat her heart to ensure her own immortality. When the Queen is attacked as she poisons Snow White, she transforms into a swarm of ravens; when the White Hart is attacked after blessing Snow White and thereby confirming her legitimacy as ruler in tune with all of nature, the magical animal is  transformed into a flock of white birds. And when Finn dies because the Queen can’t save him without imperiling her own youthfulness, we see a pool of black blood exuding from the Queen. She may be blond and beautiful on the outside, but inside she is evil. 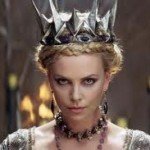 Snow White therefore plugs into the  same primeval emotions as The Lord of the Rings—a dispossessed and beleaguered, morally superior White ingroup fighting against overwhelmingly powerful forces of evil. Like post-1965 America, the regime has no legitimacy; it is entirely destructive of all that is good and beautiful. The emotional high point of the movie is the victory celebration when Snow White was surrounded by the cheers of her people—all White. The world was righted. Crops will grow again; the misery and oppression are ended.

Elsewhere (see here, p. 69ff), I have argued that the  construction of morally defined ingroups (rather than extended kinship or coercion) is a critical feature of individualism and basic to uniquely Western forms of social organization. Snow White plugs into the emotional core of this sense of a morally defined ingroup. It is also a racially homogeneous ingroup; the dwarves are little White people; the pixies look like White babies.

In the end, Snow  White is an excellent metaphor for our times, although the message is doubtless lost on the vast majority of the audience.  In general, the movie’s messages tapping into the White subconscious are implicit, not explicit—thus sparing it from ever-present Hollywood sanctions on anything resembling White advocacy. Messages that implicitly tap into the White subconscious, like those apparent in Snow White and Lord of the Rings, are relatively impotent to actually change people’s conscious attitudes, while at the same time they are effective in drawing in a White audience.

Nevertheless, the image of elite Whites who, like the evil Queen and her brother, are eagerly reaping the rewards to be had by dispossessing their own people and allying themselves with the  forces of darkness is an emotionally compelling depiction that plugs into exactly what is happening throughout the West. Indeed, the metaphor of an elite composed of traitorous, evil Whites supported by the the  Dark Army is more appropriate to the  contemporary situation than Tolkein’s image of besieged Whites fighting ugly, violent, mindless, animalistic non-Whites. The movie could therefore have a potent emotional effect on Whites who already have an explicit sense of White consciousness, or those nearing such an explicit consciousness.

Snow White thus manages to plug into two primeval emotions central to the West and relatively weak in the  rest of the world: Romantic love as an ideal—chaste, pure, and desexualized, and the ideal of a morally constructed ingroup fighting the forces of evil. Despite all the ideologically motivated anti-White trash that is put out by Hollywood, movies like Snow White show that  there is an audience for movies that play to these primeval Western emotions. Its box office success speaks volumes.

And it suggests that despite the dire situation we are now in, there is hope for the future, because the reality of what is happening to our people and culture is becoming obvious and will have very negative effects on the vast majority  of Whites in the  very near future. And when Whites  think of themselves as a besieged, morally superior ingroup fighting for their  survival against the forces of darkness, they will be a formidable force indeed.