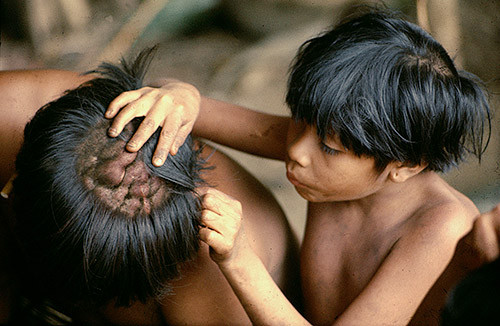 Evolutionary anthropologist Napoleon Chagnon’s new book, Noble Savages: My Life Among Two Dangerous Tribes—The Yanomamö and the Anthropologists, is creating a considerable stir because it (gasp!) reiterates his findings that the behavior of the Yanomamö tribe  of the Amazon basin was a good fit with an evolutionary model. In his review, Nick Romeo summarizes the central findings:

To a Darwinian anthropologist, it comes as no surprise that genetically related kin would form coalitions to wield power. And indeed, nearly all Yanomamö headmen have a greater number of male kin in their village than potential rivals do.  But earlier anthropological models often downplayed natural selection and rejected the idea that hierarchies might be innate features of human society. Where these models assumed that individuals of the same age and gender would have roughly equal status in a village, Chagnon documented extensive kin-based hierarchies.  He explained their presence in Darwinian terms: individuals who promote the survival of genetic kin are promoting the survival of their own genes. He also observed that power in Yanomamö villages was primarily defined by access to reproductive resources, not material ones. Powerful males had more wives and more offspring than less powerful males, and they were able to use their influence to provide close male relatives with wives. Power was both cause and effect of producing many genetically related kin in a village. A more disturbing finding was the correlation he noticed between violence and reproductive success: Yanomamö men who had killed other men were statistically more likely to have more offspring than those who had not.

Or, more colorfully, as Chagnon (who is nothing if not colorful) phrased it in his Skeptic interview with Frank Miele,

I was threatening the general attitude within anthropology that all native peoples are pacific and live an angelic kind of life, gliding through the jungle with lithe, scented bodies, being altruistic, sharing their food, and willing to cooperate with the stranger that comes in and wants to learn about them and their culture, and anxious to share their knowledge and life histories with that stranger.

Chagnon’s work quickly became a standard ethnological account among evolutionary anthropologists, but he was “effectively blacklisted” by the wider field. The second part of Chagnon’s book recounts his war with the anthropological establishment clinging to romantic views of the human past populated by peaceful gift givers living in harmony with nature. Based on the main combatants arrayed against Chagnon over the years (Marshall Sahlins [an early ideological opponent of sociobiology who recently resigned from the National Academy of  Science to protest Chagnon’s election to the NAS], Nancy Scheper-Hughes, the notorious Ashley Montagu [whose given name, as Chagnon notes in a footnote, is Israel Ehrenberg], Marvin Harris, and now yet another anti-evolutionary crusader, Jonathan Marks), the entire controversy might be a good addition to the material on the decline of Darwinism in anthropology (Chapter 2 of The Culture of Critique; Montagu is discussed on p. 26).

So you see, that’s all there is to anthropology. It doesn’t matter that Chagnon’s data conclusively demonstrate reproductive competition at the heart of Yanomamö society. You can make his data disappear into irrelevance by simply assuming that reproductive competition is not important. In the same way, the demonstration by Copernicus that the earth revolves around the sun can be safely rejected if we simply make the assumption that God created the universe with the Earth at its center. Different assumptions, different results.

Is there any wonder that anthropology has  no respect as an academic field? As a recent article in Science noted,

In the fall of 2011, Florida Governor Rick Scott proclaimed that his state didn’t need any more anthropologists, and that public money would be better spent educating scientists. Then in January, a study found that the unemployment rate among recent graduates with bachelor’s degrees in anthropology and archaeology was 10.5%, surpassed by few other majors, and that anthropology majors who did get jobs were also among the lowest paid.

Another good reason to despair of anthropology is a review of Jared Diamond’s new book The World Until Yesterday by Wade Davis appearing in The Guardian. (Davis is an anthropologist who studies “the traditional uses and beliefs associated with psychoactive plants.”) Now there are many reasons to dislike pretty much anything written by Jared Diamond (discussed scathingly by Ricardo Duchesne in his The Uniqueness of Western Civilization and by Brenton Sanderson in his review of Ian Morris’s Why the West Rules — For Now). But Davis dislikes him because he is not Boasian enough: he has the temerity to believe in a hierarchy of human cultures. For Davis, the Boasian revolution has meant that

the goal of the anthropologist is not just to decipher the exotic other, but also to embrace the wonder of distinct and novel cultural possibilities, that we might enrich our understanding of human nature [whatever that could possibly be given Davis’s anti-biologism] and just possibly liberate ourselves from cultural myopia, the parochial tyranny that has haunted humanity since the birth of memory.

So I guess that the whole point for Whites in studying other societies is to embrace non-White cultures? Davis writes that Boas has been vindicated by modern studies of genetics:

Studies of the human genome leave no doubt that the genetic endowment of humanity is a single continuum. Race is a fiction. We are all cut from the same genetic cloth, all descendants of a relatively small number of individuals who walked out of Africa some 60,000 years ago and then, on a journey that lasted 40,000 years, some 2,500 generations carried the human spirit to every corner of the habitable world.

This would seem to imply that Africans aren’t human. But you get the point. The fact that all humans are related is twisted into the ideology that there are no races, thus ignoring the work of Frank Salter and Henry Harpending on genetic distances between groups whether or not one wants to label them races. Genetic differences between human groups in traits like IQ can also be safely ignored:

It follows [i.e., as a matter of theory and ignoring all the data on IQ], as Boas believed, that all cultures share essentially the same mental acuity, the same raw genius. Whether this intellectual capacity and potential is exercised in stunning works of technological innovation, as has been the great historical achievement of the West, or through the untangling of the complex threads of memory inherent in a myth – a primary concern, for example, of the Aborigines of Australia – is simply a matter of choice and orientation, adaptive insights and cultural priorities.

Davis praises Diamond for ignoring genetic differences as influencing differences between people in traits like IQ:  “In accounting for [the Australian aborigines’] simple material culture, their failure to develop writing or agriculture, [Diamond] laudably rejects notions of race, noting that there is no correlation between intelligence and technological prowess.” This, of course, completely ignores all the data on IQ, particularly the work of Richard Lynn and Tatu Vanhanen (IQ and the Wealth of Nations; IQ and Global Inequality).

But enough on the intellectual disaster that is anthropology. The really horrifying thing is that despite Chagnon’s work and the work of many other evolutionary anthropologists showing that reproductive competition is at the very center of all traditional human societies (a standard work is Laura Betzig’s Despotism and Differential Reproduction; this trend is much less pronounced in traditional European societies), the intellectual left has been successful in avoiding the entire issue of reproductive competition within and between societies (by simply assuming it away, as in the case of Elizabeth Povinelli). The work of Salter and Harpending, cited above, formalizes the basic evolutionary intuition that immigration has huge negative fitness effects on native populations (thus accounting for the rather mundane fact that societies have intensely resisted being invaded by other groups!). If reproductive competition was indeed central to the way intellectual elites throughout the West viewed society—as was common during the height of Darwinian influence up to the 1920s until the rise of the Boasians, there would be a powerful intellectual consensus against immigration and permanent settlement of genetically distant groups.

Sadly, even the great majority of evolutionary anthropologists and evolutionary psychologists have bowed to the left consensus that dominates the academic world and avoided discussing the genetic displacement of their own people as a result of immigration policy crafted by elites that are hostile to the traditional people and culture of the West. While the ethnic motives of activists like Sahlins and Montegu are plain enough, by not discussing the disaster that is befalling the West, the non-Jews among them are completely ignoring their own ethnic interests in the hopes of retaining some small shred of academic respectability. Perhaps that is the greater shame.