In his series of articles on the future of the Republican Party, Sean Trende proposed that one explanation for increasing numbers of Whites voting Republican was simply that they were continuing to get wealthier—that it had nothing to do with race. I argued against this on a number of grounds, including the generally difficult economic times for Whites.

Now a new report emphasizes that the economy has gotten worse for all races, but in particular for Whites  (“Signs of declining economic security“).

Four out of 5 U.S. adults struggle with joblessness, near poverty or reliance on welfare for at least parts of their lives, a sign of deteriorating economic security and an elusive American dream. …

Hardship is particularly on the rise among whites, based on several measures. Pessimism among that racial group about their families’ economic futures has climbed to the highest point since at least 1987. In the most recent AP-GfK poll, 63 percent of whites called the economy “poor.” …

While racial and ethnic minorities are more likely to live in poverty, race disparities in the poverty rate have narrowed substantially since the 1970s, census data show. Economic insecurity among whites also is more pervasive than is shown in government data, engulfing more than 76 percent of white adults by the time they turn 60, according to a new economic gauge being published next year by the Oxford University Press.

The gauge defines “economic insecurity” as experiencing unemployment at some point in their working lives, or a year or more of reliance on government aid such as food stamps or income below 150 percent of the poverty line. …

Sometimes termed “the invisible poor” by demographers, lower-income whites are generally dispersed in suburbs as well as small rural towns, where more than 60 percent of the poor are white. Concentrated in Appalachia in the East, they are also numerous in the industrial Midwest and spread across America’s heartland, from Missouri, Arkansas and Oklahoma up through the Great Plains.

More than 19 million whites fall below the poverty line of $23,021 for a family of four, accounting for more than 41 percent of the nation’s destitute, nearly double the number of poor blacks. …

This breakdown in the family patterns of Whites is occurring predominantly among working class Whites for two main reasons:

Going back to the 1980s, never have whites been so pessimistic about their futures, according to the General Social Survey, which is conducted by NORC at the University of Chicago. Just 45 percent say their family will have a good chance of improving their economic position based on the way things are in America.

The divide is especially evident among those whites who self-identify as working class: 49 percent say they think their children will do better than them, compared with 67 percent of non-whites who consider themselves working class.

In November, Obama won the votes of just 36 percent of those noncollege whites, the worst performance of any Democratic nominee among that group since 1984.

That’s right. 36% of noncollege Whites voted for Obama. The article suggests that the Democrats should go after this segment, but it’s pretty clear that, despite substantial numbers of working class Whites staying home in the last election (as Trende emphasizes), the vast majority of working class Whites are not buying in to the rainbow coalition of the Democratic Party, despite the Democrats’ greater emphasis on safety net issues. They don’t want to stand in line with Blacks, Latinos, legal and illegal immigrants, and everyone else for health care. And they realize that in general the taxes of the White middle and working classes are being used to support services for people quite a bit unlike themselves — people who pay proportionately far less of the tax burden and are part of the coalition of minorities that is the backbone of the Democratic Party.

Again, this refutes Trende’s suggestion that Whites are drifting to the Republican Party because they are getting richer. Marx was wrong. It’s not about social class. It’s about race. American politics is becoming ever more racialized.

Clearly, the way forward for the Republicans is to get presidential candidates who advocate policies that appeal to the White working class. The White working class has borne the brunt of the onslaught by our hostile elites; essentially, the economy has been run to favor the corporate sector and in particular the financial industry, resulting in ever-widening income gaps and ever-larger percentage of wealth controlled by the top 1%.

The Bush-Obama Wall Street bailout has resulted in the deepening financialization of the US economy: Finance has displaced the technology industry as the profitable sector of the US economy. While the US economy stagnates and the European Union wallows in recession and with over 50 million unemployed, US financial corporations in the Standard and Poor 500 index earned aggregate profits of $49 billion in the second quarter of 2013, while the tech sector reported $41.5 billion. For 2013, Wall Street is projected to earn $198.5 billion in profits, while tech companies are expected to earn $183.1 billion. Within the financial sector the most ‘speculative sectors’, investment banks and brokerage houses, are dominant and dynamic growing 40% in 2013 .Over 20% of the S and P 500 corporate profits are concentrated in the financial sector. (James Petras” “The Wall St. Take-Off – 2012-2013) (See also Les Leopold, “American middle class prosperity is pure fantasy,” Salon.)

Needless to say, the financial sector is a major source of Jewish wealth. 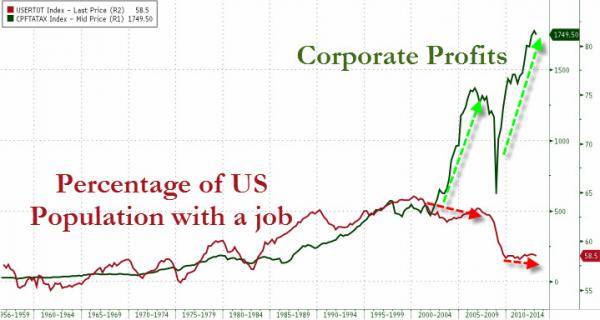 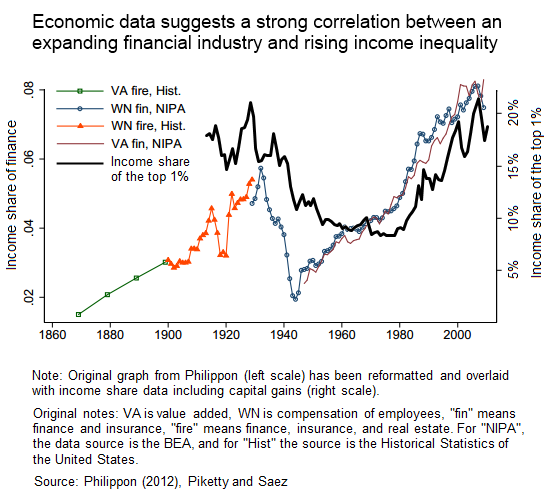 From “How the Financial Sector Consumed America’s Economic Growth“

The economic base of the White working class has eroded. They often can’t escape the onslaught of diversity: they can’t afford to move to White neighborhoods or put their children in private schools. They will resonate to an implicitly White populist message from credible Republican candidates.