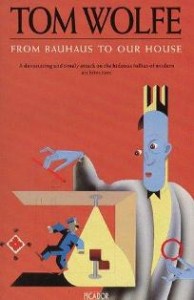 From Bauhaus to Our House, a critique of modern architecture, can be considered a companion volume to Painted Word. Wolfe charges modern architecture with causing “sensory deprivation” due to “the whiteness & lightness & leanness & cleanness & bareness & spareness of it all.”[1] Beyond aesthetic criticism, Bauhaus again makes explicit the link between modernism in the arts and left-wing politics. And once again a turning point in the U.S. was the Second World War. After the war the American elites were “willing to accept that glass of ice water in the face, that bracing slap across the mouth, that reprimand for the fat on one’s bourgeois soul, known as modern architecture.”[2]

The Bauhaus in the title refers to the Bauhaus School founded in 1919 in Weimar, Germany by Walter Gropius. This school, according to Wolfe, was the genesis of modern architecture. Ludwig Mies (van der Rohe, “less is more”) taught at Bauhaus. With the ascension of National Socialism, both Gropius and Mies left Germany for the U.S.

The heirs of the Bauhaus were very concerned with post-war worker housing in America. There was a housing shortage after the war so it was a legitimate issue, but the Left completely misread their clientele. Wolfe points out that public housing became known as “the projects,” and workers avoided them as if they “had a smell. The workers — if by workers we mean people who have jobs — headed out instead to the suburbs.”[3]A dramatic example of this phenomenon was seen in St. Louis where post-war working and middle-class Whites left the city as “a vast worker housing project called Pruitt-Igoe” was being built. There is no explicit mention of race (perhaps none was needed), but Wolfe notes that Pruitt-Igoe “filled up mainly with recent migrants from the rural South … where the population density was fifteen to twenty folks per square mile; [and] one rarely got more than ten feet off the ground except by climbing a tree.”[4] It took just seventeen years for the tenants to destroy P-I. The city demolished the dilapidated buildings in July, 1972. Wolfe calls Pruitt-Igoe and other similar projects “American monuments to 1920s Middle European worker housing.”[5] It turns out that people are not interchangeable cogs after all. 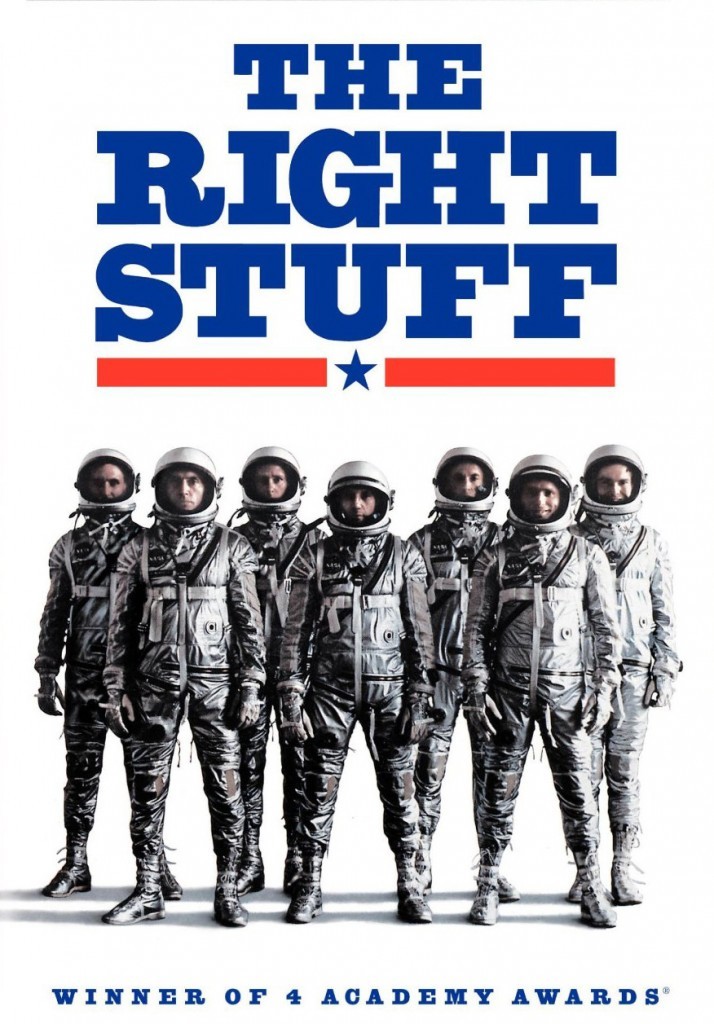 On a more positive note is The Right Stuff, Wolfe’s story of America’s first astronauts — the Mercury Seven. Though it is a “warts and all” account, it is obvious that Wolfe greatly admires the spacemen and the pool of military test pilots from which they were drawn. NASA is a civilian agency, but the space program grew out of the Air Force’s experimental rocket planes of the late 1940s. The Mercury Seven were all military pilots.

Early in the book Wolfe makes it clear that these test pilots were White men of the highest physical and mental standards. Here is a description of test pilots attending the funeral of a comrade at the Patuxent Naval Air Station in the mid-1950s: “Navy boys! … They looked so young. Their pink lineless faces with their absolutely clear lean jawlines popped up bravely, correctly, out of the enormous bellycut collar of the bridge coats.”[6]

These boys had the right stuff. Wolfe claims the right stuff is difficult to define. It is a combination of physical courage, intelligence for the skull work, grit, and competitiveness; but it’s greater than the sum of its parts.

The story begins with the X series rocket planes flown by Chuck Yeager, the prototype of the modern (postwar) test pilot — “he was the boondocker, the country boy from the back country.”[7] According to Wolfe combat and test pilots of the time as well as the first astronauts came from one of two sources — military families or rural/small town America.

After the USSR launched Sputnik I in October 1957, the progress the U.S. had achieved with the X series rocket planes seemed totally inadequate. In a near panic America entered a crash program to launch satellites. It is easily forgotten how far ahead the Soviet Union was in rocket and satellite technology from 1957–1962. America’s response to further Soviet achievements was the Mercury Project to launch a man in orbit around the earth.

Seven military pilots — the first astronauts — were selected for the Mercury Project. Gus Grissom was from Mitchell, Indiana, the son of a railroad worker, raised in the Church of Christ. John Glenn of New Concord, Ohio, was “a balding and slightly tougher version of the cutest-looking freckle-faced country boy you ever saw. He had a snub nose, light-hazel eyes, reddish-blond hair, a terrific smile, and thousands of freckles.”[8] There was Gordon Cooper from Shawnee Oklahoma and Deke Slayton raised on a farm near Sparta, Wisconsin. Scott Carpenter, of Boulder, Colorado, was a Navy test pilot out of Patuxent. Al Shepard and Wally Schirra were from second generation military families.

There they were, “seven patriotic God-fearing small-town Protestant family men,” and the press couldn’t get enough of them.[9] Such a different America in the late 1950s! No worries about diversity (that would be coming soon). No need to import millions of Asian tech workers to “stay competitive.” NASA, however, was not quite all American. “Although they scrupulously avoided publicity, many of Wernher von Braun’s team of V-2 experts had important jobs at the Cape … [At times] sizzling glühwein materialized as if out of a time warp and drunken Germans could be heard pummeling the piano in the cocktail lounge and singing the ‘Horst Wessel Song’!”[10]

Except for the straight laced Glenn, the astronauts in training worked hard and played hard: alcohol, groupies, and fast cars were used to unwind. The media and public, of course, indulged and idolized them, all this before the first Mercury launch. But this was in the natural order of things, for Wolfe compares these spacemen to the champions of old — the single combat warriors.

The ancient instinct of a people, their so-called folk wisdom, in the matter of the care, preparation, and recompense of single-combat warriors was indeed sound. Like his predecessors in the ancient past [the astronaut] had reached the blessed state where one was far more afraid of not delivering on his end of the bargain — having been paid up front — than he was of getting killed.[11]

The Mercury Seven came through, not flawlessly as Wolfe makes clear, but all acquitted themselves well and accomplished their missions. An example of Wolfe’s writing that contains both humor and truth is a description of a ticker-tape parade the Mercury astronauts received in New York City. “Like most military people… [The astronauts] didn’t really consider New York part of the US. It was like a free port, a stateless city, an international protectorate, Danzig in the Polish Corridor, Beirut the crossroads of the Middle East… It was a foreign city full of a strange race of curiously tiny malformed gray people.”[12]

Meanwhile, though the Mercury Project had eclipsed the rocket planes, the experimental fights of the X series continued to be flown by guys with the right stuff. Their top pilot at the time was Joe Walker. “He looked like a young towheaded version of Chuck Yeager, the country boy who loved to fly.”[13] Another product of the X-15 project was Neil Armstrong, described as “typical of the new breed … He had a close blond crew cut and small pale-blue eyes … [and] had flown more than a hundred missions off carriers during the Korean War.” [14] Neil Armstrong, of course, was selected for the Apollo Project and became the first man on the moon.

But some found the homogeneity of the NASA and military test pilots intolerable and their political clout was growing in the early 1960s. By January 1963 President Kennedy had decided that NASA must “have at least one Negro astronaut.”[15] The token selected was Ed Dwight. The Civil Rights Division of Bobby Kennedy’s Justice Department took an active role in monitoring Dwight’s progress. Despite intense political pressure NASA did not select Captain Dwight to be an astronaut. The astronauts of Projects Mercury, Gemini, and Apollo were all very much in the same mold. It was only after the success of the moon landings, with the space race essentially won, that NASA embraced diversity.