Always quick to spot a racial angle that they think will put White people in a bad light, there has been quite a bit of comment on the racial angle to the government shutdown/debt ceiling crisis. The New Yorker came up with “Where the GOP suicide caucus lives,” the point of which is that the Congresspeople who are shutting down the government are from rural areas where pretty much everyone is White. Here’s where the villains live: 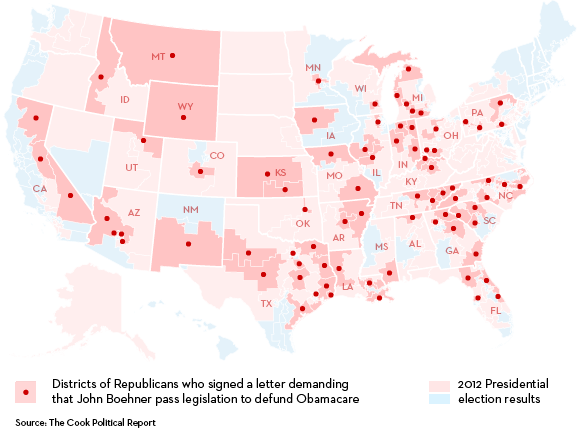 While the most salient demographic fact about America is that it is becoming more diverse, Republican districts actually became less diverse in 2012. According to figures compiled by The Cook Political Report’s David Wasserman, a leading expert on House demographics who provided me with most of the raw data I’ve used here, the average House Republican district became two percentage points more white in 2012.

The members of the suicide caucus live in a different America from the one that most political commentators describe when talking about how the country is transforming. The average suicide-caucus district is seventy-five per cent white, while the average House district is sixty-three per cent white. Latinos make up an average of nine per cent of suicide-district residents, while the over-all average is seventeen per cent. The districts also have slightly lower levels of education (twenty-five per cent of the population in suicide districts have college degrees, while that number is twenty-nine per cent for the average district). …

In short, these eighty members represent an America where the population is getting whiter, where there are few major cities, where Obama lost the last election in a landslide, and where the Republican Party is becoming more dominant and more popular. Meanwhile, in national politics, each of these trends is actually reversed.

Over at Salon we have Joan Walsh’s  “The real story of the shutdown: 50 years of GOP race-baiting,” which sees the shutdown as the culmination of 50 years of White racism emanating from the GOP. Such as:

[Ronald] Reagan had trafficked in ugly racial stereotyping over the years, about “young bucks” buying T-bone steaks with food stamps and Cadillac-driving welfare queens. But the Reagan who got elected president was better at using deracialized language to channel racial fears and resentment. He and his strategists had succeeded in making government synonymous with “welfare,” and “welfare” synonymous with lazy people, most of them African-American.

Reagan’s appeal was based on implicit Whiteness:

So for a lot of Democrat-turned-Republican voters, “government” was all about black people, Reagan knew. You didn’t have to be racist to thrill to Reagan’s declaration that “government is not the solution; government is the problem,” though it didn’t hurt.

When you can’t talk explicitly about White interests, you have to use a lot of code words. Lee Atwater, Republican strategist in 1981:

You start out in 1954 by saying, “N–ger, n–ger, n–ger.” By 1968 you can’t say “n–ger” — that hurts you, backfires. So you say stuff like, uh, forced busing, states’ rights, and all that stuff, and you’re getting so abstract. Now, you’re talking about cutting taxes, and all these things you’re talking about are totally economic things and a byproduct of them is, blacks get hurt worse than whites … “We want to cut this,” is much more abstract than even the busing thing, uh, and a hell of a lot more abstract than “N–ger, n–ger.”

The government shutdown is all about racism—implicitly White and motivated by attitudes of Black inferiority:

Republicans who know better, who probably aren’t “racist” in the old-fashioned sense of believing in black inferiority and opposing the equality and integration of the races, nonetheless pander to those who are, for electoral gain. And when the election of our first black president riled up the racists and launched the Tea Party – supposed deficit hawks who tolerated skyrocketing government spending under George W. Bush — too many Republicans went along.

Today, the entire government has been taken hostage by leaders elected by this crazed minority, who see in the face of Barack Obama everything they’ve been taught to fear for 50 years. …

Now [House Speaker John Boehner is] kowtowing to the roughly 30 House Republicans from bright red districts that also happen to be almost exclusively white, in a country that is more than one-third non-white. They want to shut down the government to torpedo Obamacare, the signature program of our first black president.

Not to be outdone,  University of Pennsylvania professor Anthea Butler tweeted that “you’d have to be blind to think race does not play into this stupidity.”

The thing is, I think these comments are basically right. It is about race and has been for some time and getting more so. A theme at TOO is the racialization of American politics. Liberals like Walsh think that they can transform the country by encouraging identity politics for Blacks and other minorities while making Whites an identity-less minority whose only function is to be economically milked by programs like Obamacare and the very generous welfare system. They shouldn’t be surprised if there is some blowback.

It’s well known that people are less willing to contribute to public goods in a multicultural society. This is particularly the case for Whites in America who will be disproportionately contributing to a health care system which will basically be a welfare system for Blacks and Latinos.

As usual, the left ignores human nature, preferring to make moral pronouncements. People are generally unwilling to contribute to public goods like government health care when the so many of the recipients who benefit the most are ethnically different than themselves. Liberals wring their hands and talk about how the White working class is not voting its economic interests, but these White people are definitely acting in tune with their ethnic interests, if only implicitly. Only a brain dead Marxist still worshiping at the altar of class warfare could fail to see that the political fault lines are fast becoming based on race, not social class. The fact that the Obama administration is widely and correctly seen as having rammed this down the throats of the American public makes the anger more intense.

America is entering the age when it will obvious to everyone that the much advertised era of racial harmony isn’t going to happen and that we are faced with an ever escalating if undeclared race war.

Another recent example of this trend is renewed talk of secession by areas of White rural America (see Pat Buchanan’s “Is Red State America Seceding?“). Buchanan notes that secession is a recurring phenomenon around the world: “The spirit of secession, the desire of peoples to sever ties to nations to which they have belonged for generations, sometimes for centuries, and to seek out their own kind, is a spreading phenomenon.”

In the U.S., there are several very mainstream separatist movements, all in states with a major rural/urban, White/non-White divide—Buchanan mentions Northern Colorado, Northeastern California, Western Maryland, and the Upper Peninsula of Michigan.

In California, the Democrats have 2/3 of the state legislature and are able to override any effort by Republicans to control immigration or lower spending on programs mainly benefiting non-Whites. Gov. Jerry Brown recently signed a bill approving drivers’ licences for illegal aliens that had been resisted for years when Republicans had more power. I rather doubt that the counties contemplating secession are enthused.

In all these cases part of the problem is that the urban areas that dominate state politics are infected with cultural Marxism and favor things like gay marriage, benefits for illegal aliens, gun control, high taxes and lots of government services. They would never phrase their grievances in explicitly racial terms, but the implicit message is that White people want to have sovereignty in an increasingly non-White country intent on transferring wealth from Whites to non-Whites.

But if these movements succeeded in creating new states, these new states states would be overwhelmingly White, rural and conservative. This would be anathema to the powers that be, since, among other reasons, it would shift the balance of power in the Senate because there would be eight new White, conservative, Republican senators. So expect a huge resistance.

In the long run, a much better solution than creating new states would be to create a new White nation out of the areas being left out of the ongoing anti-White  revolution.

The left is gloating because they have transformed the country to the point where they are on the verge of a permanent majority with a non-White voting base.  Whites are rebelling. At this point, the rebellion is only implicitly a racial thing, but it may not be long before it becomes explicit. And that would be transformative.