The recent study by Maureen Craig and Jennifer Richeson on the reactions of Whites to becoming a minority (discussed here) included a manipulation where experimental subjects (all Whites) read an “assuaging paragraph” intended to calm their fears about the impending minority status of Whites. The paragraph was a very authoritative sounding claim that “despite the shift in the demographic make-up, the relative societal status of different racial groups is likely to remain steady” and “White Americans are expected to continue to have higher average incomes and wealth compared to members of other racial groups.”

This was merely an experimental manipulation. The experimenters did not argue that the assuaging claim about White social status was true. But, given that they are proposing that fear of loss of social status is indeed the central mechanism underlying all their results, it is important to think about whether it is true or not. Again, the model they propose is that White people confronted with their impending status as a demographic minority fear a decline in their social status. This then motivates them to adopt a variety of positions associated with conservative politics in America, such as opposing a government role in healthcare, favoring more defense spending, and presumably opposing gay marriage, abortion, and restrictions on gun rights. 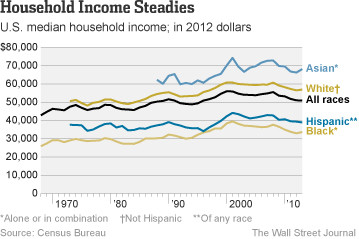 As the above chart shows, it’s not the case that Whites “have higher average incomes and wealth compared to members of other racial groups.” Asians have had a higher average income ever since they became a demographically significant group. Moreover, in states like California, Whites are losing out in competition with Asians and Latinos for valued resources, such as admission to the University of California (“California students feel UC admission squeeze“). Whites (26.8%) are now the third most common racial group in the UC system, following Asians (36.2%) and Latinos (28.8%) (the latter doubtless boosted by the rule that students in the top 9% of their  high school graduating class are automatically admitted; Blacks are underrepresented because race cannot be used as a criterion and there are few all-Black high schools as Latinos have colonized many formerly Black areas. Immigration has huge costs for Blacks as well as Whites).

Another aspect of the future decline in the economic position of Whites is highlighted in a recent report by James G. Gimpel, a professor of government at the University of Maryland, posted by the always valuable Center for Immigration Studies (Immigration’s Impact on Republican Political Prospects, 1980 to 2012). Importing millions of poor, uneducated people will be an ever-increasing drain on society as a whole and will lead to political power for redistributionist policies that will hurt Whites.

Prof. Gimpel’s study is focused on showing that supporting immigration is a losing strategy for Republicans long term — no surprise given the racialization of American politics in which non-Whites are coalescing in the Democratic Party. Gimpel’s argument is that importing millions of uneducated people produces greater income inequality and a large mass of voters who will favor income redistribution:

Census Bureau data indicate that immigration has added significantly to the nation’s low-income population. Immigrants and their minor children account for one-fourth of those in poverty and one-third of those without health insurance (Camarota 2012; Rector 2006). McCarty, Poole, and Rosenthal (2008) have described the connection between rising immigration, increasing economic inequality, and greater partisan polarization at the national level in some detail. Large numbers of immigrants arriving after 1965 have been unskilled, earning low wages, and exposing the native poor to wage competition.

Moreover, it is from areas of higher income inequality that we find the most support for a robust government with an expansive regulatory and redistributive role in the economy, among all citizens, not just immigrants. Not only do the counties exhibiting high income inequality vote more Democratic in presidential elections, they also produce tides of local opinion supportive of government regulation and policies to tax and redistribute wealth. …

Gimpel shows that there is a correlation between the Gini Index of income inequality and support for liberal policies of wealth redistribution and government regulation.

In short, Craig and Richeson’s assuaging paragraph reassuring Whites ignores the future costs of immigration to Whites. As the U.S. continues to import the poor and uneducated, there will be increasing electoral power behind redistributionist policies fueled by tax increases that will fall disproportionately on Whites. And as the electoral power of Whites decreases, the demands for such policies will become politically unstoppable. The same can be said for American conservative traditions of limited government and individual freedom.

Prof. Gimpel’s conclusion suggests that the tide of low-skill immigrants cannot be reasonably expected to be upwardly mobile given the continued downward pressure on wages produced by immigration.

Republicans are right to want to attract Latino voters. They are indisputably a growing share of the population and the electorate. But expanding the flow of low-skilled immigrants into an economy ill-suited to promote their upward mobility will be counterproductive given the evidence presented here.

The logic here is that low-skill immigrants will suffer as the U.S. continues to import millions of low-skilled immigrants like themselves. Prof. Gimpel suggests that Republicans should phrase their message to basically say that restricting immigration is good for the immigrants we already have:

At the same time, Republican reservations about higher immigration levels can be too easily typecast as racist and xenophobic. This is because the party’s elites have failed to deliver a clear message that they want a pro-immigrant policy of reduced immigration and that these two goals are complementary. Such a policy will also prove to be the best means moving immigrants toward the middle and upper income status that will promote their geographic and political mobility.

However, it’s worth pointing out that one of the well-known costs of multiculturalism is that people are less willing to contribute to public goods like health care and education when the recipients are members of ethnic/ethnic outgroups — a result that flows naturally from evolutionary thinking. If Prof. Gimpel is correct that immigration leads to an ever-expanding and permanent underclass unable to improve themselves economically, the results will be explosive. As Whites decline in political power they will be increasingly unable to prevent being taxed to support public goods for this underclass of poor and unskilled non-Whites.

And although Prof. Gimpel prefers to couch his argument in terms of the effects of immigration on wages and the upward mobility of immigrants, a realist perspective on racial/ethnic differences in IQ like that put forward by Jason Richwine implies the same thing.

In either case, the result will be increasing resentment by Whites that will have cataclysmic political implications. When it is impossible to redress legitimate grievances at the ballot box, Whites will consider other means to attain their goals. Craig and Richeson’s results imply that Whites view becoming a minority as a threat to their social status, and they note that increased racial polarization is a likely outcome. When these threats to White’s economic status are increasingly obvious (despite the current media blackout) in a context where democratic methods are ineffective, things could change dramatically. One can easily imagine that explicit talk of White identity and interests would fall on fertile ground and that political rhetoric emphasizing the loss of traditional America would appeal to disempowered Whites.

Immigration advocates are playing a very dangerous game. Racial polarization in the context where a formerly dominant majority is in the position of not only ceding political power but also funding social services for the ascendant majority is a political time bomb.