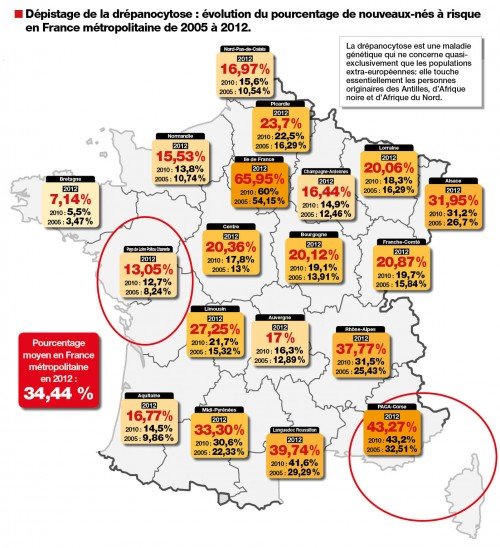 Map of percentage of newborns screened for sickle-cell disease, overwhelmingly of Arab, Black, Turkish and Indian descent. In 2006 these made up 27% of newborns, rising to 34.44% in 2012.

I take bold claims from alternative media with a grain of salt. So when the popular French racialist blog Fdesouche (short for “ethnic French”) claimed that around 34.44% of newborns in France in 2012 were non-White, I did not think much of it, supposing this figure was much too high to be realistic.

I decided to reconsider however when I came across a shockingly bad article in Le Monde supposingly “debunking” Fdesouche’s claim under the patronizing title “Sickle-cell anemia, the genetic disease which is exciting the far-right.” The “rebuttal” is a long collection of sophistic arguments and non-sequiturs*, none of which address Fdesouche’s data purporting to show that demographic change and de-Europeanization in France are rapidly occurring on a massive scale, what the French call le Grand Remplacement or “the Great Displacement.”

Admittedly, it is very hard to get a handle on the rate of demographic change in France given the lack of official ethnic statistics (I have attempted to provide some sense of the ethnic situation in France with statistics on first- and second-generation immigrants; we know that while ethnic Europeans rapidly converge economically/educationally to the French average, Blacks and Maghrebis do not, and that first-generation North Africans have a relatively high birth rate). We know that Pew forecasts that the United States will have a non-White majority by the 2040s and an Oxford professor has estimated that native Britons will become a minority in their own country by the 2060s. Very obviously France, with a comparable immigration history since World War II, could be on a similar timeline.

Fdesouche gets around the lack of ethnic data by using medical data on the screening of sickle-cell disease among newborns from the French High Authority for Health (HAS). Because of the cost of screening, only newborns from (overwhelmingly non-White) regions and ethnic backgrounds at risk of sickle-cell are screened. Fdesouche points to the fact that the number of screened newborns has increased from 27% in 2006 to 34.44% in 2012.

The HAS indicates that newborns are only screened for sickle-cell disease based on geographic origin, including all individuals originally from (I quote):

Needless to say, the babies that are screened are then overwhelmingly non-White and almost certainly made up largely of Blacks and Arabs.

There are a number of caveats however for a newborn to be screened: Both parents must be from an at-risk region or only one parent if the other is not known; if there is a history of sickle-cell in the family; or if there are any doubts on these criteria. The non-White population is underestimated by the data insofar as half-White newborns are not counted, on the other hand, non-Whites would be overestimated to the extent the figure includes Italians, Greeks and “uncertain” White newborns.

Regardless of the exact non-White percentage among the screened newborns, the fact that the proportion screened has increased a whopping 7 points – an over 25% increase in just 6 years – suggests an exponential increase in the non-White share of births.

The report itself suggests the increase in screened babies is because of an increase in the at-risk population:

One can first of all observe that the percentage of the targeted population in France proper has been increasing constantly since 2006, from 27 to 34% in 2012. Yet the rate of the heterozygotes, that is healthy carriers, has remained identical at 1/38 of targeted [newborns], which is an indicator of appropriate targeting. (p. 40)

It also incidentally notes that the targeting methods needs to be discussed because of among other reasons “the question of geographic origin which poses problems of discrimination” (p. 41).

Are really one third of French births non-White, overwhelmingly African and/or Muslim? This would not actually be out of line with what we see in the rest of the West. In the U.S., Whites already make up a minority of births. In England and Wales as early as 2005, less than two-thirds of newborn babies were reported as “White British.”

Today, the political irresponsibility of being a race denialist is mandatory, but reality can’t help but rear its head as medical responsibility demands that doctors actually take individuals’ genetic heritage into account (just so long as they don’t call it “race”). And, according to the medical evidence we have, there is precious little time to safeguard France as a European Nation.

I have to note that this issue came to my attention recently because the French National Front (FN) denounced a claim that it had drawn up the map of the screened newborns, indignantly asserting that as a respectable, non-racialist, civic nationalist party, it was completely indifferent to whether ethnic Frenchmen become a minority in their own country in the future. The FN has become rather soft-line compared to President Charles de Gaulle, who argued that non-Whites should “remain a small minority. Otherwise, France would no longer be France. We are of course above all a European people, of White race, of Greek and Latin culture, and of Christian religion.”

No doubt North American White Nationalists can be critical of the FN’s positioning. I would note however that, as of today, this position is necessary for the FN to be a media-acceptable and potentially electable political party (in contrast for example with the British National Party, which nonetheless does important counter-cultural and metapolitical work). If Marine Le Pen becomes President of the Republic, as a recent poll suggests she could if she faces François Hollande in the second round in 2017, then no doubt freedom of speech on this topic would be much greater in France. For example, already Prime Minister Viktor Orbán in Hungary has been able to argue with other European leaders that “[t]he goal is to cease immigration whatsoever” and that “the ethnic basis of the Nation-State” should not be broken.

* The arguments in the Le Monde piece are so simplistic and self-refuting they barely merit comment. I will merely note as an example that the two journalists simultaneously claim that “The disease therefore has no ‘ethnic’ factors, but indeed geographic ones” and list “Blacks from North America” as among the screened groups. The French media — owned as it is by deracinated oligarchs, manned by bobo-liberal journalists,** and beholden to the postwar cultural hegemony we observe in the West — often seems to want to brainwash French people against believing their lying eyes on the demographic changes in their country. But if this is the best propaganda the regime can provide, we must be nearing the end of the process.

**  bo-bo = bourgeois-bohemian, as discussed in my article on Alain Soral.