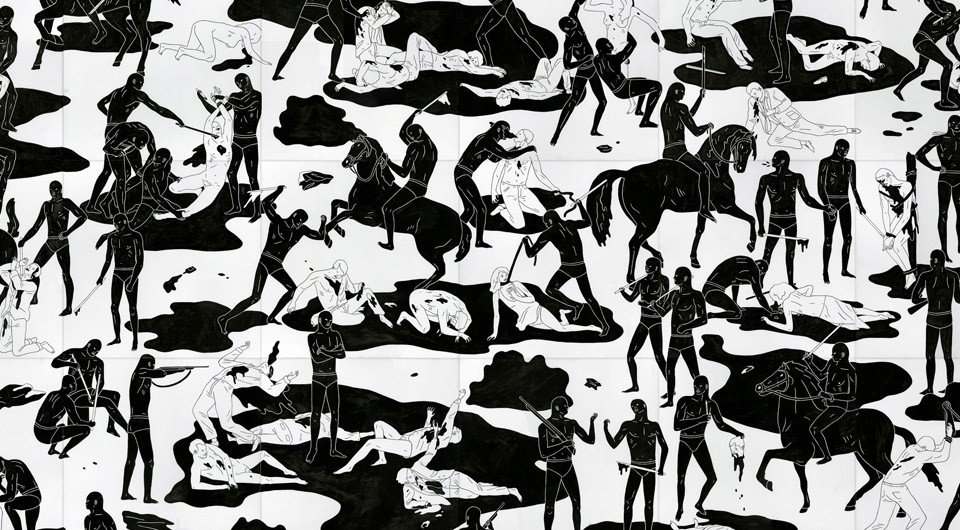 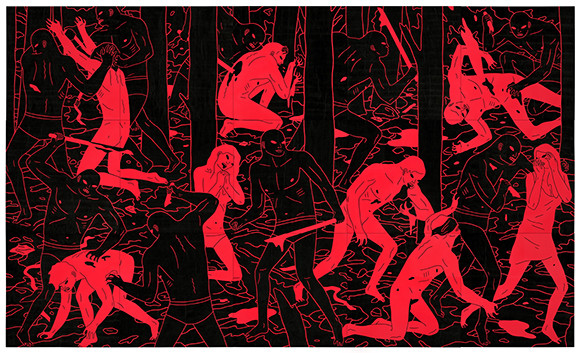 It’s well known that the art world has been a fiefdom of the left for over a century, so finding art that speaks to the issues facing White America seems unlikely at best. It’s obvious enough that Cleon Peterson‘s paintings depict a world of savage violence and depravity:

In Cleon Peterson’s End of Days, … Peterson’s world of depravity does not simply crash and burn: it reverses polarity, inherited not by the meek but by the vengeful and merciless. Whatever days have ended, they have been succeeded by a new age of barbarism, with clear winners and losers. The triumphant take no trophies, apart from the occasional severed head, but the defeated have clearly lost more than their viscera – they have lost all semblance of control, dignity, strength and, most of all, hope.

But not all is lost, nor is it over. If that sounds like the good news, well, it’s not. The scenes of brutality are depicted in medias res, after the first blows were struck, in most cases not quite lethally. As the victims live to suffer, their tormenters seem to revel in that persistence. In fact, the tormenters, which Peterson calls the “shadows,” appear to derive their strength from their subversion.  …

Many of those scenes have featured characters with physical appearances largely undifferentiated from one another, suggesting a classless unsympathetic society, yet in this new body of work Peterson incorporates “shadow” figures and a new dichotomous order. There are haves and have-nots, but amid the havoc it’s hard to decide who’s who. 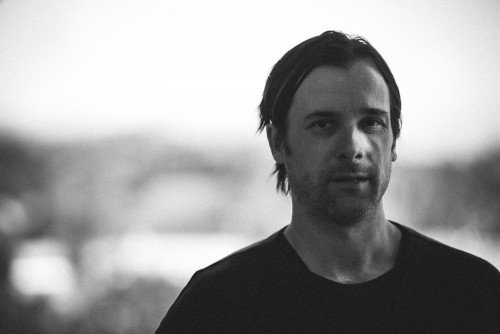 Cleon Peterson’s nightmarish tableaux feature scenes of a barbaric holocaust, where might is right and the weak are merely souls with holes for the strong to torment and abuse. Deviance is the norm, and the displaced individual is forced to navigate this wicked world alone, finding hollow bits of pleasure and meaning in violence, sex, religion and drugs.
Although the 39 year-old California artist chuckles, “My work doesn’t just contain violence, there’s a humour to it – the images are so over the top.” A horde of uniform bad guys, at once ethnic, gothic and alien rampage through the works, sacking small the metropolis within and wantonly abusing its law-abiding residents. These bogeymen are so comically stereotyped as to infer that oppressors take many forms, throughout history to the present day, from slavers and plutocrats to bullies and witch-hunters.

What’s not emphasized or even mentioned is that the vast majority of his paintings depict black figures attacking and eviscerating white figures. The brief mention of the “ethnic” character of the violence in the above quote is the only reference I have found to what is painfully obvious. Peterson is often described as depicting a dystopian future, but I have yet to see anyone point out that in this dystopian future whites are mercilessly victimized by blacks.

A title like “Vengeance” has an obvious connotation of black revenge. 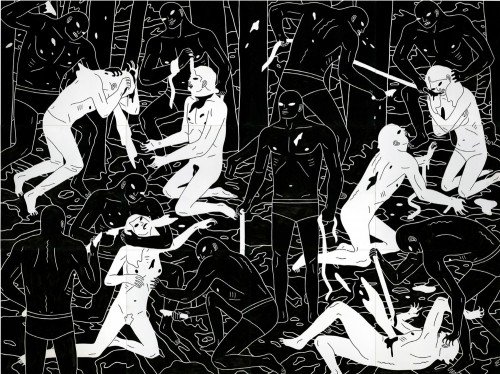 “Justice” could be interpreted to mean that the blacks standing over the soon-to-be white victims are meting out justice or, ironically, that this is the perverted sense of justice that will prevail in the future. 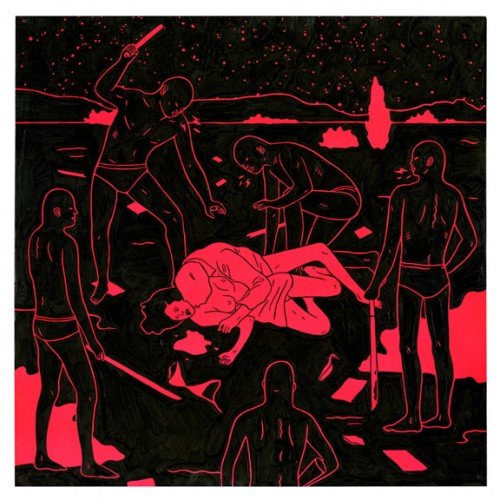 In many of the paintings the black figures assaulting whites are in uniform — they have the power. One can’t help thinking of this as a vision of the consequences of giving up power to people with historical grudges, as Whites around the world are doing. 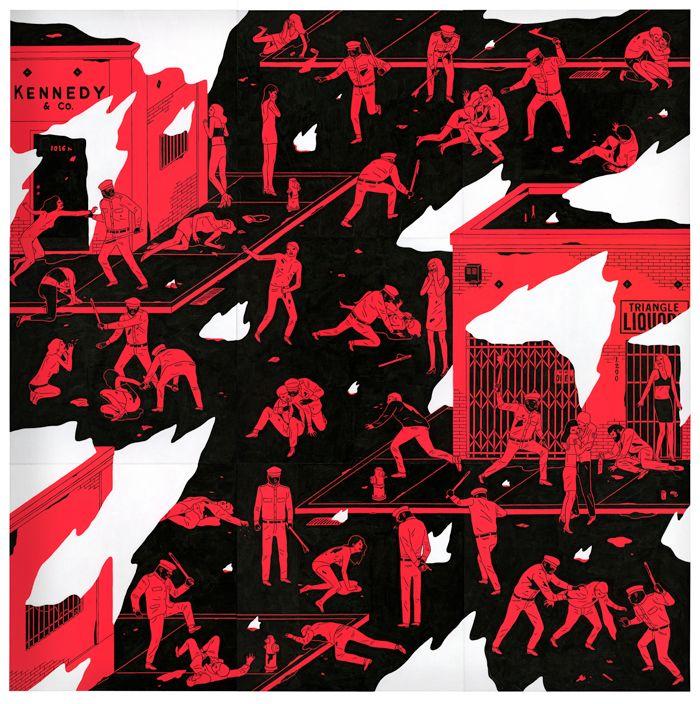 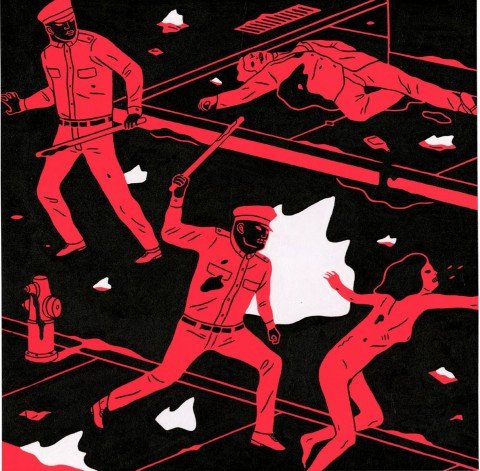 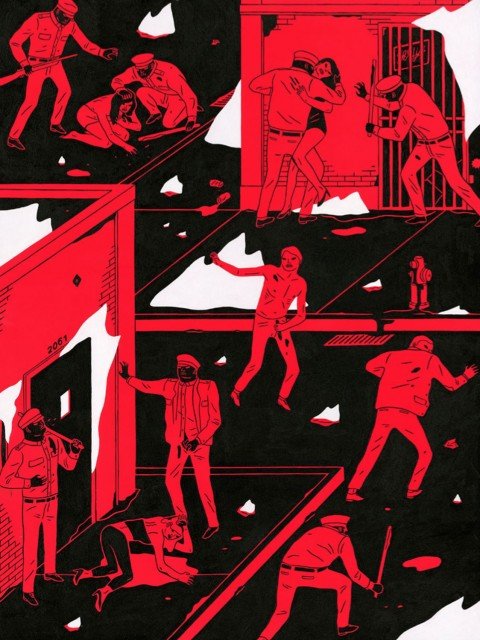 “The Weak and the Powerful”

To be sure, Peterson has done paintings where all the figures are black. 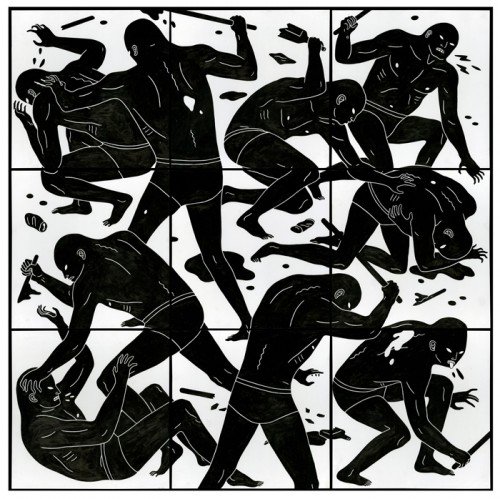 But when the figures are of different colors, I haven’t found any where the black figures are being victimized by the white figures. 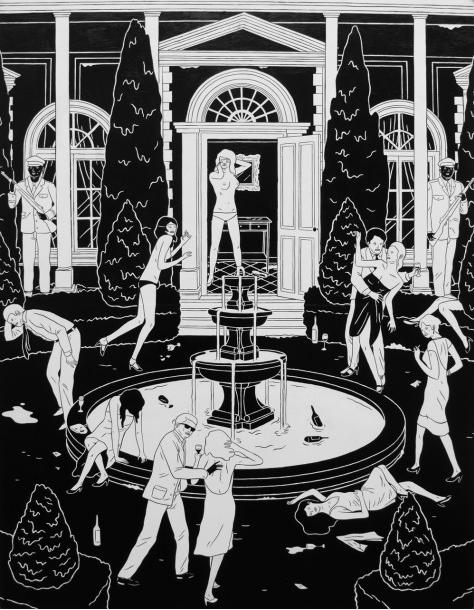 Degenerate scene with White figures in “Outside Fountain” 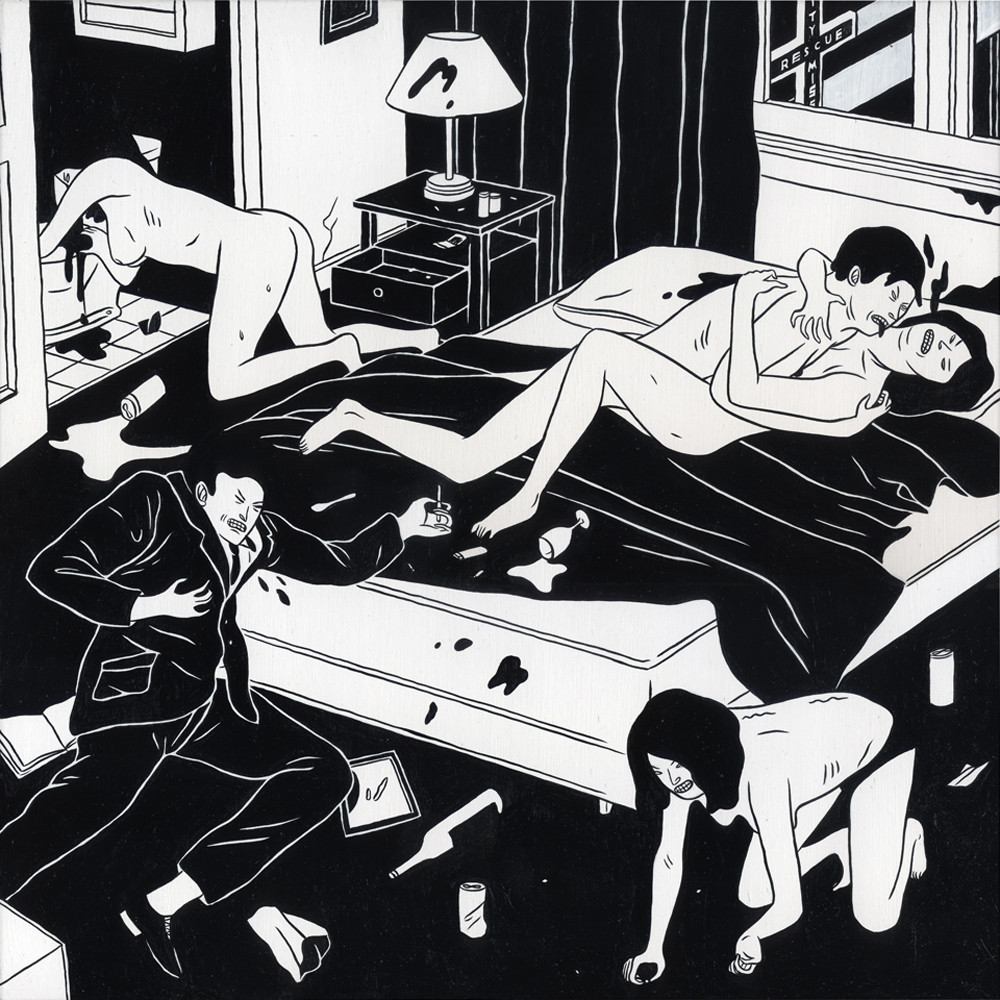 But a very large percentage of his output clearly depicts white figures being victimized by black figures. The black figures are always depicted as male, but the white victims are often females — the obvious implication of black males having power over white females. The black figures all look alike, always with the same menacing facial expression. They are dressed alike in any given picture, either in police uniforms or nearly naked in what looks like underwear or a tight bathing suit. The white figures are differentiated by sex and many look racially White—they often, but not always, have blond hair and White facial features. They are dressed variously, some men in suits. 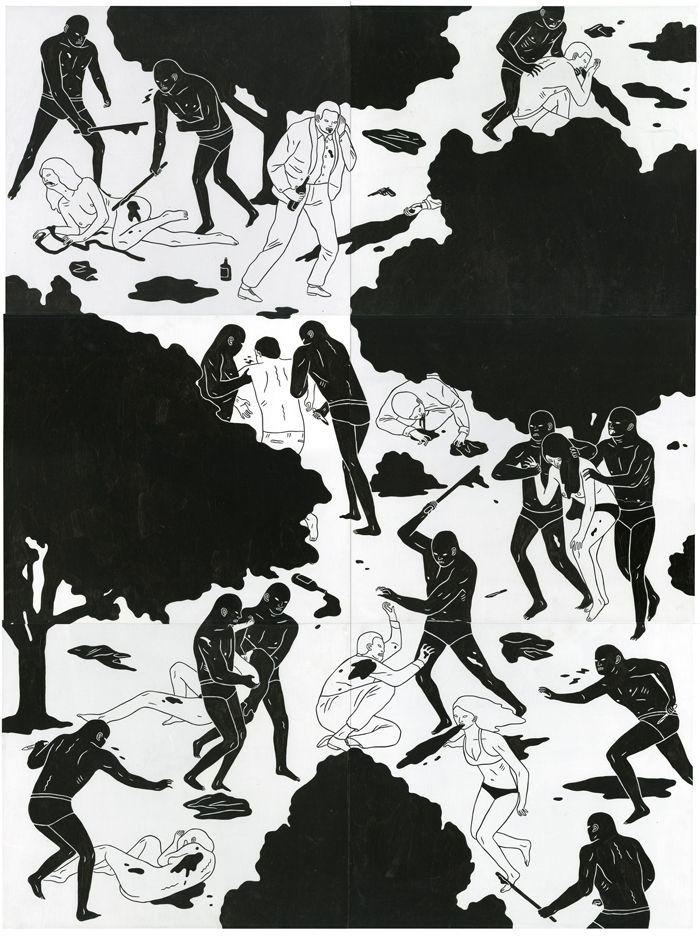 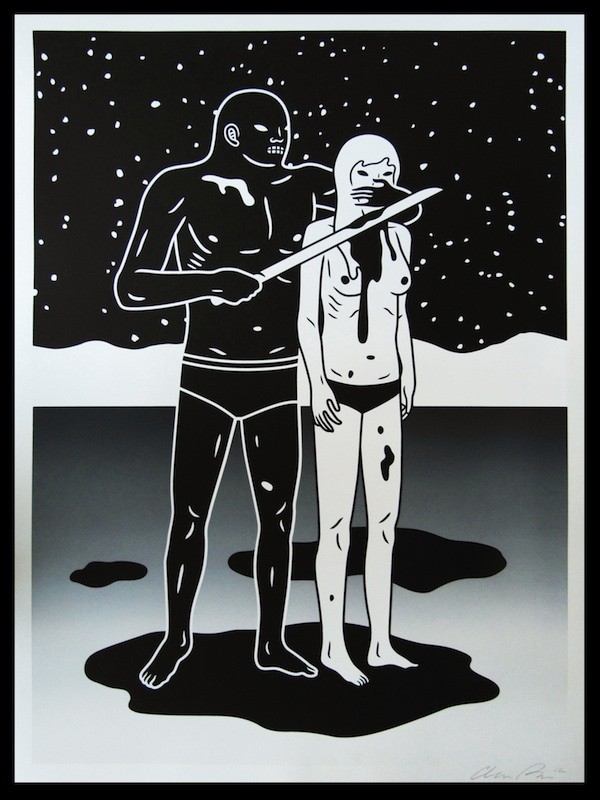 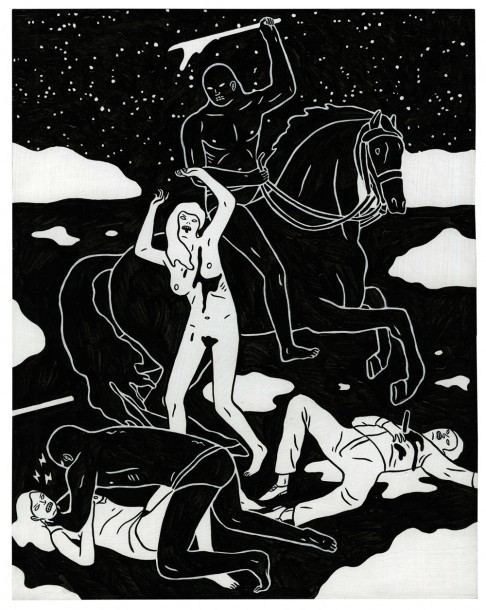 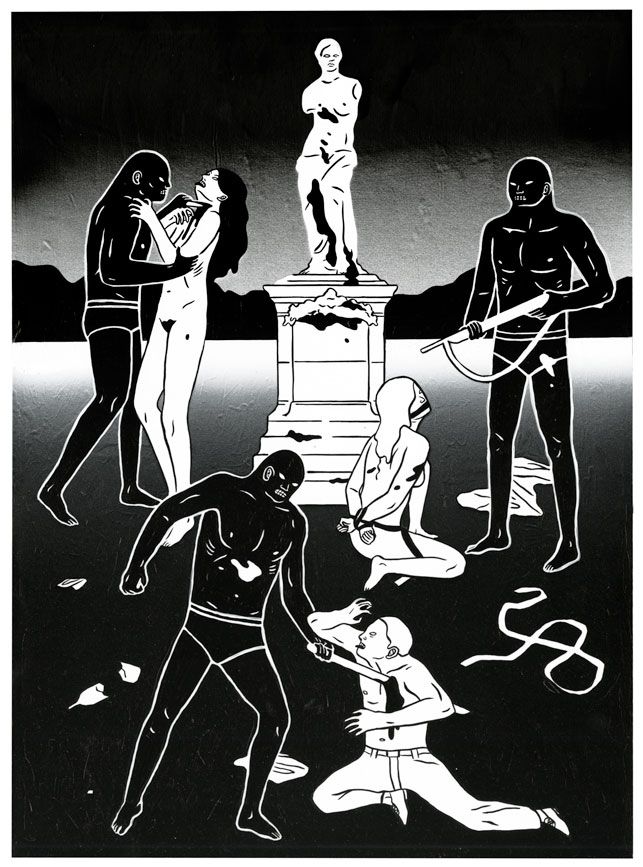 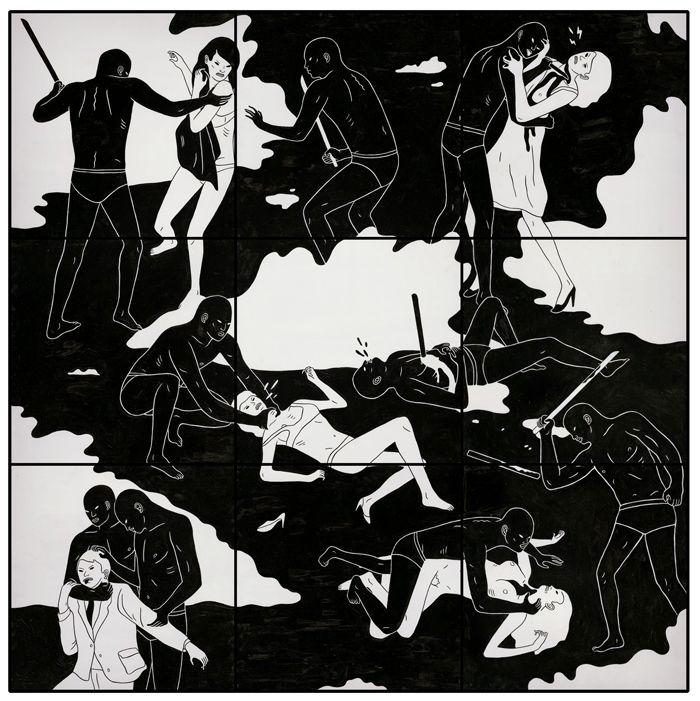 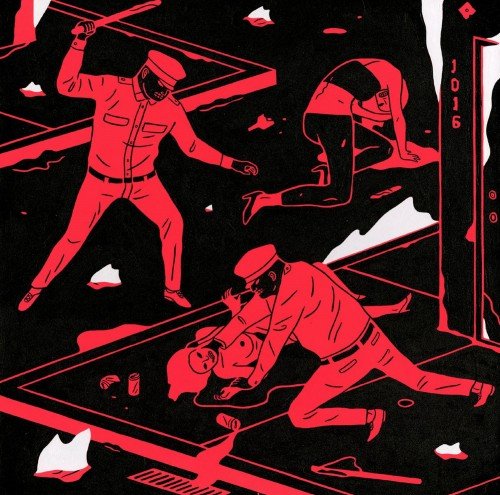 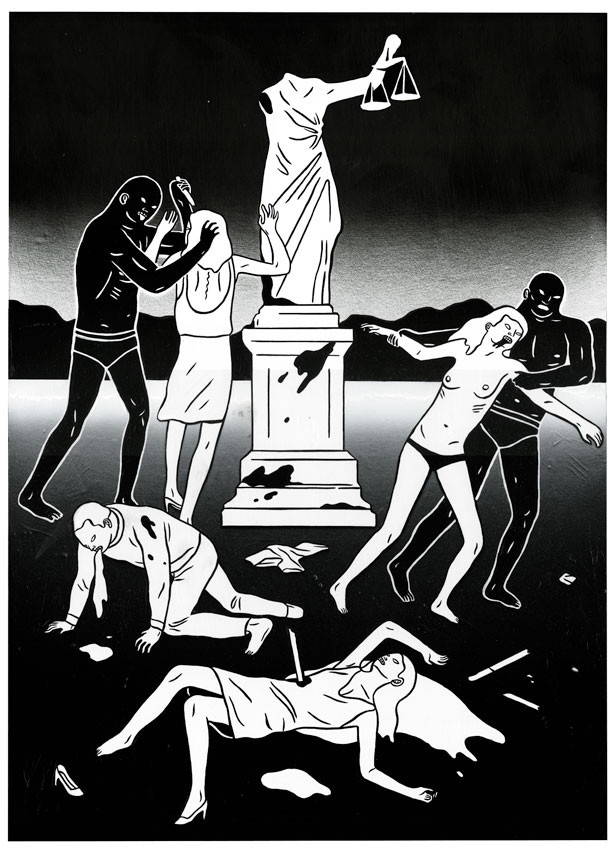 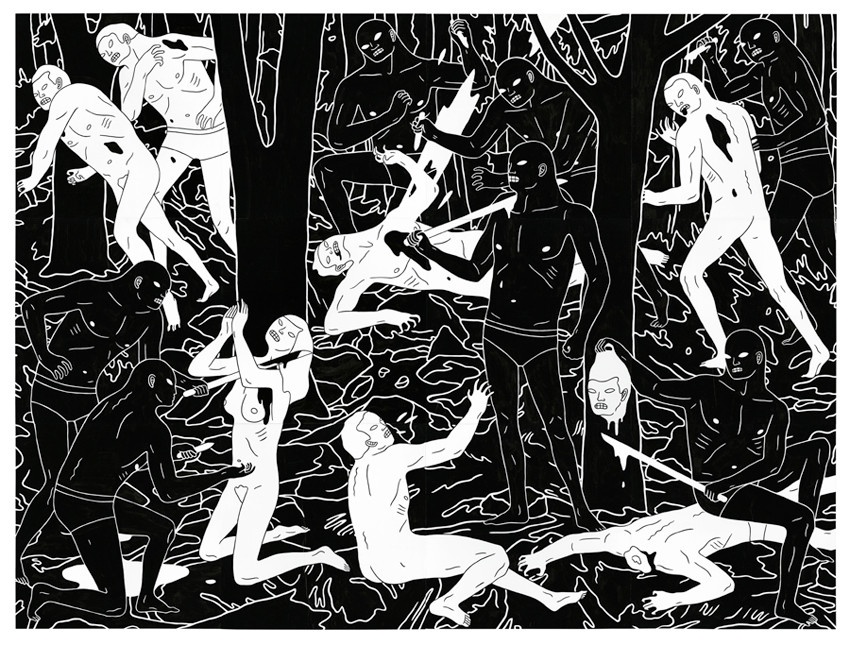 Mr. Peterson would likely never claim to be depicting a dystopian future where non-Whites have power and use it to mercilessly attack Whites. He is, after all, trying to make a living as an artist. But there is an obvious ingroup-outgroup motif here—the figures cannot possibly be seen as other than representing different groups.

And it’s pretty clear that he is not on board with the harmonious, loving future constantly advertised by our hostile elites. An interviewer asks,

Do you believe human beings will ever overcome violent behavior or is it just an uncontrollable aspect of life in a chaotic universe?

[Peterson] What would life be without violence? It’s part of us and our world.

Right. And in particular, because it’s part of human nature, ethnically based, ingroup/outgroup violence won’t magically end when Whites give up power.

Buy one of his prints and hang it on the wall, to remind you of the dystopian future that awaits Whites. And provide motivation to change all that.