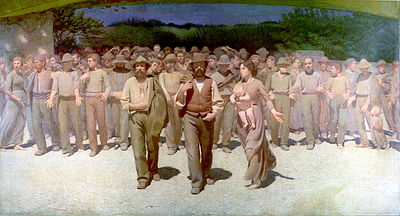 Translated from the French by Tom Sunic

Below is the interview A. de Benoist gave recently to Boulevard Voltaire.

Q: Despite repeated promises of politicians, both from the right and the left, nothing seems to be stopping the rise in unemployment. Is it something inevitable?

A: Officially, there are 3.5 million unemployed in France, which means that the unemployment rate stands today at 10.3%. This figure, however, varies depending on how it is being computed. The official statistics take into account only the category “A”, i.e.  those who are unemployed and who are actively looking for a job, while leaving out the categories “B”, “C”, “D” and “E”, i.e. those looking for a job although having had some reduced work activity as of lately; those who have stopped looking for a job but are still unemployed; those receiving training; those in traineeship; those working under “subsidized contracts”, etc. When adding together all these categories, one reaches the real unemployment rate of 21.1% (more than double the official figure). If we refer to the overall rate of the inactive population of working age, then we arrive at 35.8%. Moreover, if we were to take into account insecure, part-time, or short-term jobs, as well as the number of the “working poor”, etc., then this figure keeps getting higher.

Undoubtedly, changes in unemployment depend on the official policies—but only to some extent. Today’s unemployment is no longer of a cyclical nature, but primarily structural, something many have not fully understood yet. This means that work is becoming a scarce commodity. The jobs that have been lost are less and less being replaced by other job openings. Of course, the expansion of the service sector is real; yet the service sector does not generate capital. Moreover, twenty years down the road almost half of those service sector jobs will be replaced by networked machines. To imagine, therefore, that someday we shall return to full employment is an illusion.

Q: There are people who live in order to work and others who work in order to live. Aren’t those who refuse to lose their lives in order to earn it part and parcel of some ancestral wisdom? Is work really a value in itself?

A: What needs to be pointed out is that what we call “work” today has no relationship whatsoever with what used to be productive activity of the past centuries, namely a simple “metabolization” of the nature. Neither is work a synonym of activity, nor of employment. The near universal spreading of wage labor was already a revolution of sorts to which the masses remained hostile for a very long period of time. The reason for that is that they had been accustomed to the consumption of the assets of their own labor only and never viewed labor as  means of acquiring the assets of others, or in other words, to work in order to purchase the results of the labor of others.

Labor has a dual dimension; it represents both concrete labor (its metabolizing purpose) and abstract labor (energy and time spent). In the capitalist system what counts is abstract labor only, because this kind of labor, being indifferent to its own content, being also equal for all goods for which it provides a basis of comparison, is the sole factor that transforms itself into money, thus acquiring a mediating role in a new form of social interdependence. This means that in a society where commodity is the basic structural category, labor ceases to be socially distributed by traditional power structures. Rather, it performs itself the function of those ancient relationships. In capitalism, labor constitutes itself the dominant form of social relationships. Its by-products (commodity, capital) represent simultaneously concrete labor products and the objectified forms of social mediation. Hence, labor ceases to be a means; it becomes an end in itself.

In capitalism value is made up of the time spent working and represents therefore the dominant form of wealth. Capital accumulation means accumulating the product of the time spent in human labor. This is why the enormous productivity gains generated by the capitalist system have not resulted in any significant decrease in working hours, as one might have expected. On the contrary, based on the trends of unlimited expansion, the system keeps imposing always more work. And it is right there that we can observe its fundamental contradictions. On the one hand capitalism seeks to extend working hours, since it is only by having people work more and more that it can achieve capital accumulation. On the other, productivity gains allow from now on the production of more and more goods with less and less men. This makes the production of material wealth more and more independent from the time spent on working. In this respect the unemployed have already become the superfluous people.

Q: You are known to be a workaholic. Do you ever miss watching the grass grow and fondle some of the cats in your household?

A: I work 80-90 hours a week simply because I like doing what I do. This does not make me an adept of the ideology of work. Quite the contrary. In the Genesis (3: 17-19) work is depicted as a consequence of the original sin. Saint Paul says: “He who does not work, neither shall he eat” (II Thessalonians 3:10).This moralistic and punitive view of the work is just as alien to me as the Protestant redemptive work ethic, or  for that matter the exaltation of the value of work by totalitarian regimes. Yes, I am aware of the fact that the word “travail” (work) comes from the Latin tripalium, a word which originally used to designate an instrument of torture. Therefore, I try to sacrifice to the requirements of “free time,” which is “free” insofar as it is freed from work.