Thames Valley Police are the tireless crime-fighters responsible for protecting the people of Oxfordshire in southern England. But their resources are limited, so they have to make sure they respond only to genuine crimes, not to trivial complaints. This, for example, is how they treat a trivial complaint:

One girl, referred to as Girl A for legal reasons, felt brave enough to face her abusers in court, while others gave evidence from behind a curtain. She wept as she described how the gang threatened to burn her younger brother alive unless she had sex with them. She was repeatedly raped and sold for sex between 2004 and 2007 when she was aged 12 to 15.

When she went to police [in Oxford], no action was taken. She claimed that they threatened to arrest her instead. “They threatened on a number of occasions to arrest me for wasting police time for turning up at a police station in a state after running away,” she said. “Any self-respecting police officer would have seen something was wrong. If you pick up a child who is covered in cigarette burns and bruises, something is fundamentally wrong. Adults should be doing their jobs, it’s not down to a child.” (Oxford sex gang: girls as young as 11 “forced into prostitution”, The Daily Telegraph, 14th May 2013)

Child rape? Child prostitution? Not a problem to Thames Valley Police when non-White males were responsible. Here, by contrast, is a serious crime that prompted them to leap into action:

A 43-year-old woman has been arrested over a racially abusive message posted on a beauty salon’s Facebook page. The woman has been named locally as April Major, the owner of the at-home beauty business in Bicester, Oxfordshire. The post, made following the terrorist attacks in Paris, said the salon is ‘no longer taking bookings from anyone from the Islamic faith, whether you are UK granted with passport or not.’

Thames Valley Police arrested the woman yesterday after receiving a number of complaints about the message. A Thames Valley Police spokeswoman said: ‘We have arrested a 43-year-old woman in Bicester today after a number of complaints about a racially abusive post on social media. The woman was arrested under section 19 of the Public Order Act which relates to the display of written material which is threatening, abusive or insulting with the intention of stirring up racial hatred, and for producing malicious communications. We take all such complaints seriously and will investigate. If you suspect that racially aggravated crimes are being committed please report them to Thames Valley Police on 101.’ (Police arrest woman for ‘racially abusive’ Facebook post banning Muslims from beauty salon because it is ‘time to put my country first’, The Daily Mail, 16th November 2015)

Thames Valley Police allowed Muslim men to rape and prostitute White girls for at least six years without lifting a finger to interfere. But they acted immediately when a White woman said she didn’t want Muslim customers for her private business.

They also lied about the nature of her message. Islam isn’t a race, so April Major wasn’t being “racially abusive.” And so what if she had been? She should be free to serve whomever she wishes in her own business. As it is, she’s arrested for trying to exercise a traditional British freedom. That’s the authoritarian aspect of the perverted liberalism now ruling the modern West. Here’s an example of the narcissistic aspect:

The previously unnamed man who played John Lennon’s ‘Imagine’ on a portable piano outside Paris’ Le Bataclan — scene of a deadly terror attack — has told the story behind his performance. David Martello, 34, embarked upon the 400 mile trip after hearing the news on TV in a German pub, the Guardian reports. “I phoned my friend to talk about it, got in the car and drove all through the night,” he said. “I just knew I had to do something. … I wanted to be there to try and comfort, and offer a sign of hope.”

At least 127 people are reported dead after a series of violent attacks in Paris on Friday night. Le Bataclan was among the worst hit, with 87 civilians killed during a shooting at an Eagles of Death Metal gig. Members of the public gathered outside the venue on Saturday morning (November 14) as Martello, who had travelled all the way from Konstanz in Germany, played an instrumental version of Lennon’s famous track. … Lennon’s ‘Imagine’ famously features the lyrics: “Imagine there’s no countries / It isn’t hard to do / Nothing to kill or die for / And no religion too / Imagine all the people / Living life in peace”. (‘Imagine’ pianist traveled 400 miles to perform John Lennon song in Paris, NME.com, 15th November 2015)

When Enoch Powell “imagined” the future effects of mass immigration in 1968, liberals howled with outrage and drove him into the political wilderness. Now his prophecies are coming true all across Europe. The massacre in Paris was a spectacular event, but the 129 deaths there are a fraction of the true cost imposed on France by non-White immigration. How many “Gauls” — as Muslims in France contemptuously describe the native French — have been murdered, raped, beaten and robbed by their enrichers over the decades? The same question, mutatis mutandis, can be asked in many other White nations, from the United States to Australia. But White liberals continue to prefer lies and fantasies to ugly reality. 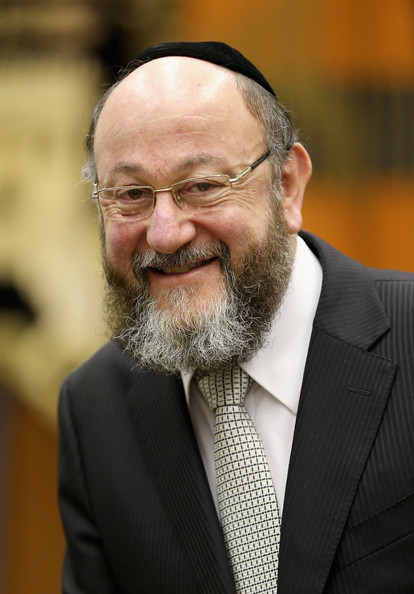 Ephraim Mirvis: Open borders for goyim, not for Jews

And so do ethnocentric Jews like Britain’s Chief Rabbi Ephraim Mirvis. He appeared on BBC radio after the Paris massacres, fresh from a visit to a “refugee” camp in Greece. With infinite empathy and compassion, he expressed his hopes that, despite the unfortunate events in Paris, the goyim would remember that there are only a few bad apples among the hundreds of thousands of victims fleeing war and persecution by moving from Turkey and Greece to Germany and Britain. Meanwhile, in Israel, empathy and compassion for migrants and refugees were in short supply:

In May, I attended a graduation party in Tel Aviv for Taj Jemy, a 28-year-old asylum seeker from Sudan. He gave a speech about the war in his home, Darfur, and how he wished his family could be in Tel Aviv to see him graduate and receive his bachelor’s degree. Africans, dressed in their best clothes, and some Israelis, filled the room, clapping and celebrating. He ended, “If I can do this, you can as well,” and everyone gathered there wanted to believe him. The celebration was interrupted by the Israeli police, who burst into the room, scattering the crowd. The partygoers recalling their skills of hiding, ducking and fleeing, spilled onto the street to find it barricaded and surrounded by horses. Seven people were arrested that night for not having their visas with them.

Israel’s policy toward African asylum seekers is to pressure them to self-deport or, as the former interior minister Eli Yishai put it, to “make their lives miserable” until they give up and let the government deport them. About 60,000 African asylum seekers have entered Israel since 2005, most of them Muslims from the Darfur region of Sudan, and Orthodox Christians from Eritrea; today that number is closer to 45,000. (Israel’s chilly reception for African asylum seekers, The New York Times, 31st October 2015)

Israel doesn’t just avoid violent crime and terrorism by deporting Third-World enrichers or fencing them out. It also avoids a massive drain on its public health services:

For refugee children newly arrived in the U.S., hepatitis B, tuberculosis, parasitic worms, high blood lead levels and anemia are among the top public health concerns covered by screening programs. In one of this nation’s largest-ever epidemiological studies of refugee children, public health researchers describe the health profiles of children arriving here in the past decade as their families fled persecution.

Researchers from the PolicyLab at The Children’s Hospital of Philadelphia (CHOP) have created the first multi-state, large-scale data set for refugee children who arrived in the U.S. between 2006 and 2012. The children arrived from six countries, three in Asia and three in Africa. “Understanding the health profiles of children from different countries allows us to provide better counseling for parents, prioritize specific tests and ensure that we give children a healthy start here in the U.S.,” said lead author Katherine Yun, M.D., M.H.S., a pediatrician at PolicyLab and in CHOP’s Refugee Health Program. The study appeared Nov. 12 in the American Journal of Public Health.

The study team analyzed medical data from 8,148 refugees, all under age 19, from Bhutan, Myanmar, the Democratic Republic of the Congo, Ethiopia, Iraq and Somalia. The data were collected in medical screening visits completed shortly after children arrived in four states: Colorado, Minnesota, Pennsylvania and Washington. (Large study sums up health issues for new child refugees to U.S., ScienceDaily, 13th November 2015)

The same diseases are being carried into Europe by the current flood of “refugees.” Who will pay for treatment? Ordinary White tax-payers, of course. That’s their role in life: to fund their own dispossession. If they object, they will be arrested. They must not point out that Third-World immigration introduces terrorism, crime, and diseases that were unheard of in the West. That’s merely reality, and our liberal elite aren’t concerned with reality. They concentrate on something much more important: feeding their own narcissism — and in the case of Jews, advancing their ethnic interests — while the West burns.