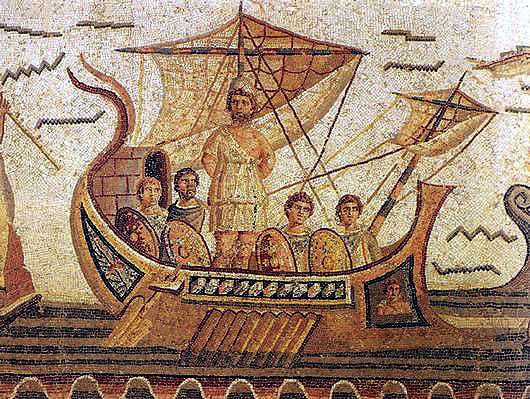 A scene from the Odyssey from a Roman mosaic

Homer was central to the Ancient Greeks’ conception of themselves and their origins. At their most holy and self-conscious moment, the quadrennial festival of the Panathenaia, the Athenians  “gathered for total immersion in the Homeric stories, drinking up the tales from which most of their great tragedies drew their plots and characters, thinking of Homer as the source of what they were.”[i] According to Nicolson, these origins are fundamentally northern. He observes how, particularly in the Odyssey, the Greeks are depicted as outsiders to the Mediterranean world, with Odysseus portrayed as an impoverished northern wanderer not entirely at home in the Mediterranean world, who, after many trials and tribulations, returns home a broken king, an outsider with few allies. While Odysseus and the other Greek chieftains conceive of themselves as noble kings, the civilized states of the Mediterranean see them as barbarians.

When Odysseus and his crew find themselves facing Polyphemus the Cyclops, the notion of the Greeks as outsiders is manifest. “Strangers, who are you?” the man-eating Cyclops asks them. “Where do you come from, sailing over the sea-ways? Are you trading? Or are you roaming wherever luck takes you over the sea? Like pirates?”[ii]  Nicolson notes that, “he may be the king of Ithaca, the son of Laertes, a man whose fame has reached the sky, but that is not how the world of the Odyssey treats him. Everywhere he arrives anonymous, not somebody but ‘nobody.’”[iii] This epithet features prominently in the same episode from the Odyssey when Polyphemus asks Odysseus his name. Odysseus replies that his name is “Nobody.” When Polyphemus is later blinded and cries out for help, the other Cyclops ask who has hurt and blinded him. “Nobody!” he answers to our amusement.

Much later in the epic, Odysseus is “never more ragged, never treated more as a wanderer from God-knows-where,” and his hosts are “never more beautifully organized into a single contented orderly world” than when, in Book 6, he finds himself washed up on the shore of the Phaeacians. The Phaeacians are “what the Greek wanderers dream of being.” It is they who introduce Odysseus, “whom they consider a pirate and a drifter,” to the delights and riches of an urban life based on sailing ships that are “as quick as a bird, as quick as a darting thought.” In Nicolson’s interpretation, “embedded here is a memory of the ignorant northerners’ first encounter with the miracle of the sailing ship,” and of their wonder at “its transforming effects on the dynamics of life”[iv]

Nicolson also points out incongruities in the Iliad which likewise hint at the Greeks being relative newcomers to the Mediterranean world. He notes, for example, how the classical Greeks were baffled by Homer’s dislike of fish which they regarded as the ultimate delicacy. They couldn’t comprehend why Homer’s heroes ate beef when they were so often located next to prime fishing spots. For Nicolson, this contempt for fish was “likely a steppe land inheritance, from the time when a large herd of meaty animals was one of the identifying marks of a king or hero.”[v]

The heroes of the Indo-European warrior world were men whose individuality was commemorated in large single burials, often under prominent mounds called “kurgans” on highly visible places among grazing grounds cleared for their herds. Meat mattered in this warrior world, largely as a symbol of portable wealth when alive, and for feasting when dead and cooked. The Bronze Age burial mounds of the Greeks are said to “mark the shift away from the communal values of the Stone Age, when joint graves gathered the ancestors in a community of the dead, to a time which valued more than anything else the display of the glorious man.”[vi] According to the author:

Homer is full of half-buried memories like this of that northern past which hint at a non-Mediterranean world, far from water, far from cities, land-locked, dominated by an enormous sky, horse-rich, focused on flocks and herds and the meat they provide, violent, noble and heroic. This steppe-world is the place from which Achilles comes. It is not the Homeric foreground, because Homer is inconceivable without sailing ships, cities and the sea — without everything that is bound up with the name of “Troy”: civilization, the sea-borne raid, the connection to the east — but that other northern place lurks as a kind of murmured ancestral layer, a sub-conscious.[vii]

The dates are uncertain, but the Indo-European pre-Greeks first entered today’s northern Greece from the Balkans sometime between 2200 and 1700 BC. They left early graves in this region which record the movement of a people who would soon reach the Peloponnese. From the way these graves are built, and from the objects they contain, they are likely precursors to the famous Shaft Graves at Mycenae discovered by German archaeologist Heinrich Schliemann. Nicolson notes how the weaponry and armor found in these graves closely matches descriptions of weapons in Homer, but not that of weapons used in contexts nearer to the Iron Age. He concludes that: “This is the equipment of a profoundly ancient world,” and that, taken together, “Battle equipment, word-form and verse-form all point in the same direction: Homer’s foundations are in pre-palatial antiquity, a poem stretching back at least as far as the seventeenth century BC.”[viii]

A thousand years before their arrival in Greece the Indo-Europeans had left their homeland in the Pontic steppe between the Black and Caspian Seas, in what is now the Ukraine and southern Russia. They were perhaps driven West by an increasing aridity on the steppe, which reached a peak of dryness in about 2000 BC, and the comparative fertility of European soils. Wherever they went, they “made their burial mounds, which are now to be found all over the steppe and beyond, at Marathon and Troy, on Salisbury Plain and in Denmark, all over Germany, and in Greece, and were probably once above the Shaft Graves at Mycenae which were flattened only late in antiquity.”[ix]

As they expanded out of their original homeland they first occupied the eastern and central part of Europe and only later spread into the southern and western fringes of the continent — including into what would eventually become Greece. Nicolson notes that:

It seems likely that the young men of the Proto-Indo-European world were organized into warrior bands, perhaps raiding parties, and they used bows, arrows, clubs, cudgels and swords. Society may have been organized into three ranks: farmers, priests and a warrior elite, out of which the chieftains and even kings emerged. The word for king embodies the principle of order, a meaning still implicit in the English word “rule,” with a connection between “rex” and “right,” between ordaining the world and possessing it. But there is also evidence in the inherited languages of a powerful sense of hospitality and its duties. “Guest” and “host” are different descendants of the same root, a measure of the mutuality buried within them. The mutual giving of gifts, the swearing of oaths and the expectations of loyalty from that behavior are all evident in the descendant languages. Trust was a part of the Proto-Indo-European moral consciousness.[x]

The remarkable conquests of the Indo-Europeans, which occurred over many centuries across a vast geographical expanse, demand explanation. Clearly the Indo-Europeans’ high-trust culture,  characterized by prestige-motivated fighting (which Duchesne dubbed “aristocratic egalitarianism”) was evolutionarily adaptive. Kevin MacDonald has pointed out how

the Indo-European warriors who are so central to his [Duchesne’s] theory of the uniqueness of Western culture did in fact achieve biological success at least sufficient to plant the psychological roots of Western uniqueness. Prestige and honor among one’s fellows is in fact typically linked with material possessions and reproductive success. Like other psychological traits related to aggression and risk-taking, the pursuit of social prestige by heroic acts is a high risk/high reward behavior, where evidently the rewards sufficiently outweighed the risks over a prolonged period of evolutionary time.

The Indo-Europeans triumphed in the forests of Germany, the steppes of central Asia, the mountains of Afghanistan, and the islands of the Aegean. Their expansion cannot be attributed to their possession of superior technology. Many of the peoples they conquered — including the Minoans and the Etruscans — had more advanced civilizations than the Indo-Europeans invaders did.

The Mighty Dead: Why Homer Matters is a fascinating and beautifully-written book about one of the most intriguing and mysterious cultural artefacts of our civilization. Drawing from a range of disciplines (except for population genetics), Nicolson skillfully mines the archaeology of the Western imagination through the Homeric epics. Despite the book’s unabashed “Eurocentrism” its excellence is such to have prompted glowing reviews from various mainstream media organs. A reviewer for the Daily Telegraph wrote that The Mighty Dead “makes a compelling case for viewing Homer as a cluster of the qualities that still underlie our civilization,” while the Spectator praised Nicolson for having elucidated “a whole worldview at once decipherable and dramatically strange.”

While Nicolson’s theory of the deep Indo-European roots of the Iliad and the Odyssey is intuitively appealing, his thesis, despite the extensive, highly suggestive evidence he offers, remains unproven and must, therefore, be regarded as speculative. Just because Homer’s world includes elements of the original Indo-European culture does not necessarily mean that it began there (though it is a reasonable inference that it did), and “could have” does not equal “must have been.” Clearly, notions of offended honor and predation by belligerent war bands encamped before urban centers were not limited to the Indo-European sphere of influence. With this caveat, the book is well worth reading for the insights it offers into both Homer and the deep origins of Western culture.