The following is a clear sign that Whites’ position vis-à-vis the government and elites has become perilous, or at least tenuous.  Traditionally in political rhetoric, the phrase “all Americans” is meant as an implicit rebuke to those who in their hearts would very much like to exclude one particular group who is outside the norm of heterosexual Whites.

For example, picture a leftist politician proclaiming, “We need a country that works for all Americans.” There’s a little bit of attitude in that “all.”  It’s another trite cliché of political speech, or if you like, politically correct speech — right up there with “diversity is our greatest strength.” Now, however, the phrase “all Americans” is sometimes meant as a nod to Whites, not Blacks or Hispanics.  It is ironic that Republicans, and more broadly the right, have taken up the “all Americans” phrase as a rebuke to the extreme left, Black Lives Matter crowd who would be very happy to focus on their own ethnic interests exclusively.

This phenomenon has occurred recently in the “All Lives Matter” repartee to the BLM slogan.  Who would have thought that saying “All Lives Matter” would become a provocative rallying cry for normal White Americans?  Former Maryland governor Martin O’Malley was forced to apologize for using this phrase during the Democratic primary campaign.  Surely this must come as a bleak reminder of where White identity stands in the diversity hierarchy. Apparently expected to shill for minorities without so much as a hope to also be protected by our country’s laws.

The Politically Correct use of “Everyone”

Even Donald Trump’s “Make America Great Again” has morphed into “Make America Great Again for Everyone.”  This modification, Trump has revealed, was suggested by, yes, Newt Gingrich, who runs the gamut from offensively politically incorrect to hyper-politically correct, depending on how he feels that particular day.  Somehow “MAGA for everyone” just sounds less snappy to my ears, which demonstrates that “inclusiveness” is not an aesthetically pleasing concept rhetorically or culturally.  Trump explains in his inimitable style: “I’m adding ‘for everyone’ because it really has to be for everyone. It’s not going to be for a group of people, it’s going to be for everyone.  It’s true.”

I sometimes put myself in the shoes of, let’s say, a Hispanic Mestizo who is otherwise hostile to Trump.  Would I suddenly come around when I hear that Trump wants to “make America great again for everyone”?  Would I then conclude, “Well, before I thought that Trump hated me; but look right there, he said ‘everyone’, and that includes me!”

It is fraught for politicians to speak collectively to Americans because of the awkwardness of trying to address an ethnically pluralistic society as a cohesive unit.  That is why politicians often tediously list all the different groups that they will “look out for.”  For example, Rudy Giuliani at one point in his Republican Convention speech found it necessary to enumerate all these different groups:

And we say thank you to every police officer, and law enforcement agent who’s out tonight protecting us, Black, White, Latino, of every race, every color, every creed, every sexual orientation.  When they come to save your life, they don’t ask if you’re Black or White, they just come to save you.

While in the whole his speech was very spirited, note that this section was in particular well-received by the audience, and that was typical throughout the convention — likely because such encomiums to diversity fit so nicely the mainstream conservative ‘colorblind’ trope (although his characterization of law enforcement happens to be true). Let’s face it, far from Trump supporters being a bunch of crypto-White advocates and neo-Nazis, as imagined by the media, there’s still a lot of cuckery in the GOP and the rest of White America.

The Transgressive use of “All/Everyone”

All of the touchy-feely rhetoric referenced above could in fact be aimed at suburban White people, who like the idea of being “inclusive,” whatever it might mean in reality.  If this is true, the extent to which the message of inclusiveness resonates with minorities is irrelevant, for political purposes anyway.  In light of the recent violence and chaos associated with BLM, however, those same moderate suburban White people may be more eager to hear that they themselves are apart of the notion of “inclusiveness,” because now this is in doubt.  So Whites’ attitudes have gone from magnanimous inclusion towards other groups, to rather anxiously taking stock of how they are esteemed in their own country.

Gingrich used what I heard as a dog whistle to the right-wing in his Republican Convention speech:

Donald Trump will show ZERO tolerance for people calling for the death of police officers. … Our law enforcement officers deserve the same respect [as a President]. And OF COURSE if individual officers are found to have violated someone’s rights, they must be held accountable under the law.  America is BASED on the rule of law. We are one nation, under God, with liberty and justice for ALL.

The fully capitalized words are written as such in the transcript to serve as a guide for Newt as to which words to emphasize in his delivery of the speech.  And as per my thesis, the word ‘ALL’ is given special emphasis, this time as a nod to Whites, many of whom probably think they are at the very edge of political incorrectness by applauding it. But of course they can buoy their feelings of righteousness with the understanding that Gingrich is not excluding any groups from multicultural America.  Whites can feel included but also morally righteous by including other groups. Win-Win!

Isn’t it strange, though, that asserting that (White) police officers should have equal rights under the law is a revolutionary concept?  Make no mistake, it is a positive indicator that Newt should say this; but it is still a little jarring that to say so should even be necessary.  Similarly, it seems to have become a bold statement to be against the killing of police.  When President Obama “condemns” the killing of police, the news anchor will announce this as though it were in question as to whether Obama might alternately endorse such actions!

Ultimately, it demonstrates how far the pendulum has swung in terms of the government’s stance towards different ethnic groups in America, and how we are heading towards South Africa-levels of anti-White fervor.  In other words, one can view this new rhetorical turn of phrase as the rearguard action of an ethnic group in retreat.  Be that as it may, let’s hope it’s an effective rearguard action — a clever masking of implicit Whiteness if you will. 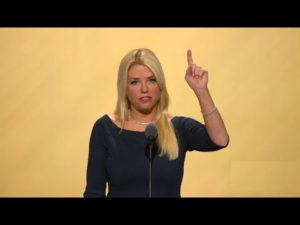 We see a similar gesture from another speech at the Republican Convention.  Here is Pam Bondi, Florida Attorney General, an attractive figure both physically and in terms of ability:

When she uttered that “everyone,” she gave a defiant look straight to the camera, as if to say, “That’s right, White people deserve the same rights as all you other special little groups.”  She then she stroked her platinum blonde hair to the side and added, “laws that back our law enforcement.”

This transgressive use of ‘all’ and ‘everyone’ was a motif at the Republican Convention, and perhaps taps into an angst felt by the greater White population.  We see Trump using the “MAGA for everyone” line as a gesture towards inclusivity and political correctness.  A forgivable gesture, but let’s call it what it is.  The transgressive use of ‘all’, however, is more noteworthy, because it has become an act of rebellion against Cultural Marxism, insofar as we are now expected to focus on the needs, wants, and indeed whims of minorities exclusively.  Perhaps “all of us” will one day morph into a simple and forthright “us,” a solidarity that other ethnic groups have no problem expressing.