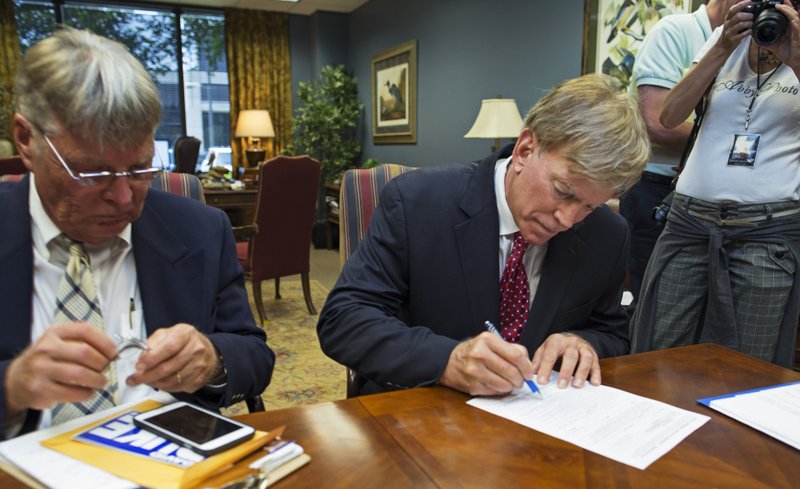 It is customary during the annual Hajj pilgrimage that Muslim devouts throw pebbles at three walls (formerly pillars), called jamarāt, in the city of Mina just east of Mecca. One of a series of ritual acts that must be performed in the Hajj, it is a symbolic re-enactment of Abraham’s hajj, where he stoned three pillars representing the temptation to disobey God and preserve Ishmael. The ceremony is commonly known as “the stoning of the Devil,” and may be regarded as a practice designed to reinforce socio-religious conformity and obedience.

I’ve been reminded of this practice by the constant re-appearance in our own society of a primitive, ritualistic “stoning of the Devil” — the now mandatory condemnation of David Duke by aspiring politicians on the Right. A society, of course, reveals much about itself by its choice of devils. In this case, the “devil” is not necessarily the person of David Duke, but rather his career, and the struggle for White interests, heritage, and ultimately survival that this career has entailed. In terms of our visible political landscape, Duke has come to represent the personification of the “folk devil” of White identity.

Those on the edges of “acceptable” political discourse must be seen to “stone” this folk devil, and dissent is tantamount to complicity. Indeed, the further to the Right that the candidate may appear, the more essential it is deemed by the shapers of political culture that the candidate should prove his mainstream credentials by refuting, condemning, and distancing themselves from the non-conforming “Other.”

Advocacy for White interests is still entirely taboo in today’s culture, in spite of the great advancements of the Alt-Right in recent years. White identity politics remains, if you can pardon the pun, beyond the pale. In this oppressive context, it has become ever-clearer in recent months that the only thing keeping Trump from the full force of an establishment onslaught has been his cautious navigation of the outer boundaries of acceptable political discourse. Trump has been forced to both define and legitimize his candidacy via statements to the effect that he is not “Other,” that he is not “beyond the pale.” He has had to do this through almost constant refutation of accusations that he is pursuing an ethnically-based politics, and by refuting the personification of that politics in the form of David Duke.

Back in March, Donald Trump was placed under immense and protracted pressure by the political-media establishment to condemn in unequivocal terms the person, endorsement, and run for Senate of David Duke. No sooner had that episode finally seemed to subside than the focus shifted to Mike Pence, Trump’s running mate. In an extraordinary exercise in political and media coercion, Pence is currently not only being pressed to display aversion to the ideological “devils” that Duke is said to represent, but even to employ a specific vocabulary — in this case, to condemn Duke and his politics as “deplorable.” Because Pence has thus far declined to use this designated term, and has therefore declined to pay homage to the current fanatical Left-Liberal zeitgeist, the media machine has intensified its pressure on the Trump campaign more generally.

Pence himself appears confused by the seeming obsession that the media and the political establishment seem to have with David Duke, and does not seem to appreciate the ritualistic aspect of what has been demanded of him. In one recent press conference with House Republican leaders, Pence told reporters: “I have no idea why this man keeps coming up. Donald Trump and I have denounced David Duke repeatedly. … The simple fact is that I am not in the name-calling business.”

What Pence mistakes as “name-calling” is in fact something much more sinister and insidious — it is an exercise in the manipulation of metapolitics.

Most recently, a Trump spokeswoman, Katrina Pierson has offered an apologetic for Pence’s refusal to “stone the devil,” and said that Pence didn’t use the word “deplorable” to describe Duke merely because he didn’t want to use Hillary Clinton’s terminology.

However, escaping the diktat of political and social conformity hasn’t been that straightforward. Much like the Communist bloc used to force dissidents to make public “confessions” on film, CNN’s Jake Tapper recently launched an astonishing attack on Pierson during “The Lead,” in which he insisted: “Let’s break out the thesaurus: Is David Duke ‘vile’?” The desired answer having finally been extracted, Tapper moved on to even more intrusive and invasive questions: Why were “racists” and “neo-Nazis” praising the Pence interview? Did this praise make her feel uncomfortable?

The ongoing saga of the “stoning” of David Duke reveals much about contemporary politics not only in the United States but in all countries where Europeans are declining demographically and politically. Perhaps most importantly of all, however, is that it also reveals the necessity of David Duke and what he represents. Although the loosely affiliated strands of dissident thought known collectively as the “Alt-Right” have made great progress in terms of penetrating aspects of mass society, our ideas and visions for the future have always relied to a great extent on their personification and instant relatability. Starved of mass public attention, we don’t have the time to elaborate on theories, policies, or social proposals. The few precious seconds of mainstream air-time our movement can sometimes acquire are crucial, and normally fall to one or two movement figureheads.

It is for this reason alone that the public mind can more readily recall the names, faces, and basic politics of Enoch Powell, Jean-Marie Le Pen, and Jörg Haider among others, than they can the intricacies of the thought underpinning those figures. In the United States, there is no figure comparable to David Duke when it comes to resonance in the public mind with the themes of White identity and resistance to the chimerical utopia of multiculturalism.

Not only is this particular position crucial, but Duke’s candidacy for the Senate is equally necessary. In contemporary politics and journalism, lies and compromise are endemic. Even the Trump campaign has been pressured into an almost ceaseless concessionary posture, increasingly defining itself by what it isn’t rather than what it stands for. The great Anglo-Irish poet W.B. Yeats once wrote that:

A statesman is an easy man,
He tells his lies by rote;
A journalist makes up his lies
And takes you by the throat.

Outside the halls of bargaining politicians and the lying press, David Duke has been remarkable over the years for his lack of compromise, his lack of concession, his lack of apology. His message has been consistent; his focus clear. Clarity of focus and truth of vision are essential in America today, just as they are across Europe and in all countries where European-descended peoples may hope to retain a viable existence.

Many of the admonitions uttered by Duke in the 1960s have now come horrifyingly to fruition. Intimidated by a hegemonic cultural establishment, European-Americans have been cowed into abandoning their interests for over fifty years. During that time, Duke’s nightmare vision of an American people dispossessed in its own land has become reality. Pew Research report that “the U.S. electorate this year will be the country’s most racially and ethnically diverse ever. Nearly one-in-three eligible voters on Election Day (31%) will be Hispanic, black, Asian or another racial or ethnic minority, up from 29% in 2012.” Based on current projections, European-Americans will be an overall minority in the United States in just 27 years. If Hillary Clinton becomes President, we may assume that this will occur sooner.

Europeans everywhere face a stark choice: Do they politely go to the grave, swaddled in materialism and brow-beaten by the hostile dialectics of rootless cosmopolitans, or do they bravely assert their interests and refuse to exit the world stage? Compromise, negotiation, and the middle ground are no longer tenable options. They haven’t been for some time. To return to Yeats: “The center cannot hold.”

David Duke stands outside the center, and perhaps proudly so. The Trump campaign is vitally important, but we neglect the Duke campaign at our peril. As the grip of our enemies tightens on our people, a Duke victory in Louisiana would be a “shot heard round the world.” We have witnessed enough nightmares become a reality. Now it is time to dream.