The Summer issue will be posted online for download June 21, and they will be posted to the mail 7/6. As you can see from the cover, it’s a very stimulating issue, with several new writers. I call particular attention to the lead article, by Claire Ellis, based on her dissertation under the supervision of Prof. Ricardo Duchesne at the University of New Brunswick. She provides an exhaustive review of the demographic and cultural changes in Europe — and the consequent likelihood of civil war and genocide. 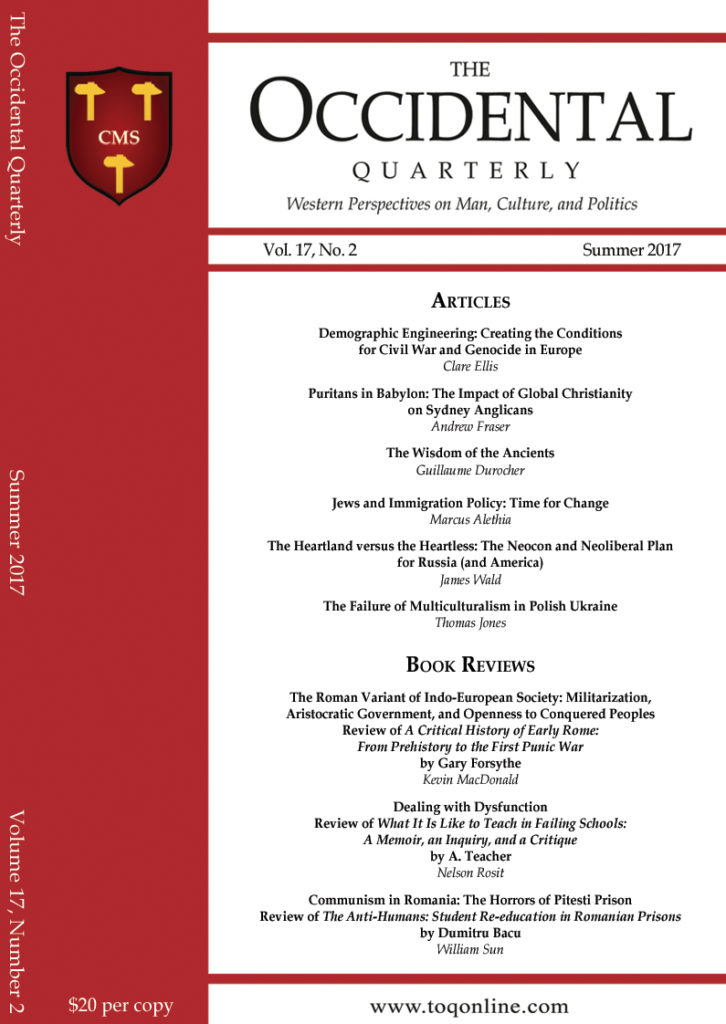 TOQ fills a unique niche on the right in bringing together scholarly articles on a wide range of topics that are mired in political correctness elsewhere. Because of printing and mailing costs, TOQ has only been able to operate because of generous subsidies from the Charles Martel Society. However, we are on the verge of becoming self-sustaining. This is a very easy and affordable way to help the cause.

As editor, my first priority is to increase the number of subscribers. Subscriptions are $60 for four hardcopy issues (extra for subscribers outside the US), $30 for the electronic version. Here is the link to our subscription page.

There are quite a few reasons for the precarious state of our civilization and our people. But one of the main ones is that we have lost the intellectual and moral high ground to a cultural elite that is hostile to our people and our culture. The domination of the mass media and the academic world by elites that are hostile to White identity and interests is a major barrier for educated Whites to act on behalf of their interests. White people cower in fear of being called a racist for believing and acting in ways that are absolutely normal and natural for all the other peoples of the world. While other peoples defend themselves, their culture and their borders, societies in Europe, North America, Australia, and New Zealand that have been controlled by Whites for hundreds of years are the only ones to accept their demise as a moral imperative. We view this outcome as the result of competition over the construction of culture in which the legitimate interests of Whites have been compromised.

All of the scientific data are on our side. Increased ethnic diversity is associated with a host of societal ills, including decreased support for social welfare programs and lack of public trust. Those who argue that Western societies have a unique moral obligation to cede cultural and political control to non-Whites completely ignore the legitimate interests of Whites in maintaining their cultural and political control. No one argues that countries like Korea or Uganda have a moral obligation to allow other peoples to swamp the native population.

Having a large subscriber base will make it possible to for TOQ to be self-sustaining. We have established a policy whereby writers will be paid at rates that are competitive with other well-known journals of political opinion and scholarship. The amount of the stipend is not large. The writers who are putting in all the time and energy producing this material will still be working mainly to make a contribution to the ideas and ideals espoused by the journal. But it is important to get White advocacy beyond the volunteer level and to eventually support a large number of professional White advocates able to effectively compete with the legions of professionals who are able to find employment with our opponents.